What would the end of Roe mean for Americans? Five key questions 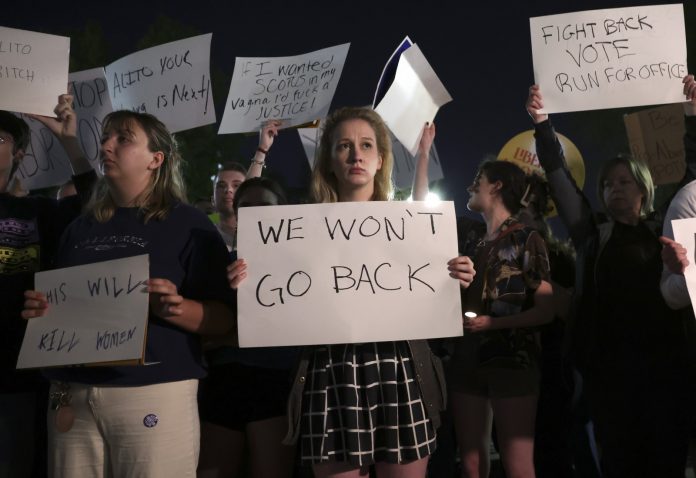 The US Supreme Court’s leaked draft decision to end the nationwide right to abortion would be one of the most explosive domestic political developments in a generation if it holds — upending the crucial midterm elections and bringing far-reaching implications for millions of Americans.

The final opinion — expected in the coming weeks — would be the culmination of almost 50 years of activism around the argument that Roe v. Wade, the 1973 landmark ruling guaranteeing federal protection of abortion rights, was wrongly decided.

Where are we now?

Several states have already enacted punitive restrictions on abortion, led by ban in Texas after about six weeks of pregnancy. Kentucky, Florida, Idaho and Arizona all have passed slightly more lenient curbs, allowing abortion until 15 weeks.

Oklahoma’s total ban — outlawing all terminations except when the mother’s life is in danger — would go into effect after the Supreme Court’s final ruling.

Polling on abortion is split, generally showing around a quarter of Americans believe it should be legal in all cases and another quarter think it should be allowed in most.

A CNN poll in January found that 69 percent of respondents were against doing away with Roe while 30 percent were in favor.

Overturning Roe would curb access to terminations in many areas across the country, leaving states to set their own restrictions if they so choose.

In at least 13 states, abortion would immediately become illegal, while others have bans on the books from before the 1973 landmark ruling that could be re-enacted.

Planned Parenthood, the leading US reproductive rights group, has said 26 states could enact some type of abortion restrictions.

The Myers Abortion Facility Database says the average American would have to travel around 125 miles (200 kilometers) to reach the nearest legal abortion clinic — but the figure goes up to 666 miles in Louisiana.

The leaked decision would give states clearance to ban abortions even in the case of rape or incest, a proposition most Americans believe is too extreme.

Impact on the midterm elections?

Abortion animates supporters in both parties and the leak immediately upended November’s midterm elections, where it will be a major topic for debate for the rest of the campaign.

President Joe Biden said in a statement Tuesday that overturning Roe would oblige “our nation’s elected officials at all levels of government to protect a woman’s right to choose.

“And it will fall on voters to elect pro-choice officials this November.”

The possibility that the Supreme Court would scrap Roe v. Wade would likely further polarize already deeply divided Republicans and Democrats as they prepare to lock horns with less than 200 days to go before the first ballot is cast.

The effect on the primary season would be less profound as there is not a significant amount of infighting in either party on the issue.

Democrat Chuck Schumer, the Senate’s leader, set out what he sees as the stakes in a speech on the floor Tuesday.

“The elections this November will have consequences as the rights of 100 million women are now on the ballot,” he said.

What can Congress do?

Lawmakers could codify the legal principles in Roe v. Wade, although this would require the evenly divided 100-member Senate to drop the legislative filibuster, the 60-vote threshold for passing most legislation.

The House has already passed a bill to do this but the Senate voted against, with centrist West Virginian Democrat Joe Manchin siding with Republicans to oppose the move.

Manchin has previously said he wouldn’t lower the threshold to 50 votes in any case unless it was part of a bipartisan compromise.

Republicans are united against blowing up the filibuster, and already ruled it out this year in a tussle on voting rights.

Republican senators Lisa Murkowski and Susan Collins are in favor of abortion rights, with Collins even working on her own bill to codify Roe.

But both are unlikely to agree to end the filibuster with Congress run by Democrats.

“Every American is going to see on which side every senator stands,” Schumer added.

Will it end with abortion?

Roe’s supporters say the arguments for reversing the precedent could be applied to other cases where the Supreme Court has protected “fundamental rights” that are not spelled out in the Constitution.

Opinions dealing with same-sex marriage, contraception and civil rights could easily fall into that category.

The draft opinion, written by Justice Samuel Alito, makes clear he doesn’t see this as a danger, arguing that “our decision concerns the constitutional right to abortion and no other right.”

But he has not convinced scholars who point out that lawyers have a habit of running with and expanding successful arguments to apply to related cases. – Agence France-Presse