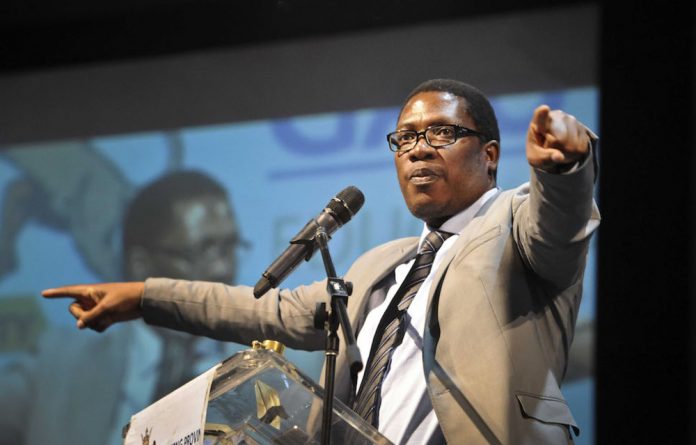 In what will go down in history as a decidedly poorly organised conference, Panyaza Lesufi has emerged as the new ANC Gauteng provincial chairperson, albeit by a slim margin.

Shortly before Lesufi was announced as the victor ahead of Lebogang Maile, delegates affirmed claims by observers that the conference had been marked by chaos and mismanagement.

At least three delegates who spoke during the open sessions at plenary took turns to lambast the national executive committee (NEC) as well as the provincial leadership for the failures.

One delegate called for the ANC leaders in attendance to take the needs of its branches into account when planning for conferences. The delegate, unknown to the media, complained that while national executive committee members deployed to the conference were booked into comfortable hotels, branch members were forced to sleep at the conference venue on a chilly winter weekend.

NEC member Pemmy Majodina responded by saying that the ANC would supply the 1033 delegates with an extra 50 rooms due to conference delays, but that 10 delegates would have to share a room.

Another delegate complained that the conference had dragged on for days with no progress in sight. The delegate told the attendees that the ANC was treating its members like “the enemy”.

One delegate, who complained about the poor organising of the conference, said she was employed in a DA-led municipality which meant that she would have to report to work on Monday.

By 4pm on Monday morning, it was still unclear when the conference would conclude, having faced delays for over three days. The conference had also failed to deliberate on the ANC’s policy documents.

It was then that the ANC members debated whether the media should be privy to debates around the poor planning of the event.

Some delegates who had spoken to Mail & Guardian on the sidelines of the conference said they had issues with accommodation on the first day of the conference. The delegates, who spoke on condition of anonymity, blamed former provincial secretary Jacob Khawe for the poor planning of the event.

Khawe, who lost his campaign for reelection, will likely be penalised by the Lesufi slate for having aided TK Ncinza, who was elected as the new provincial chair from Maile’s slate.

Insiders said Khawe took a much-needed 56 votes away from Sedibeng chairperson Thulani Kunene, who was vying for the position. The two men come from the same region and are said to have a contentious relationship. Kunene received 525 votes while Ncinza walked away with 534 votes.

Those in Lesufi’s slate are expected not to support Khawe for a role as an additional member of the provincial executive committee.

Lesufi, who won with 575 votes against Maile’s 543, is not likely to make any huge contributions to President Cyril Ramaphosa’s faction.

While the two slates are believed to support treasure-general Paul Mashatile, Maile had refused to make any pronouncements in favour of Ramaphosa for a second term.

Maile’s faction is believed to have links with the Eastern Cape faction led by Babalo Madikizela and Limpopo’s “godfather” Danny Msiza.

The conference delivered a mixed bag of a top five leadership with Maile’s faction commonly known as “Adiwele” taking away the provincial secretary and deputy secretary positions.

The win by Nciza will also be a huge boost for Ekurhuleni regional chair Mzwandile Masina, whose position hangs in the balance after he narrowly won an election against Doctor Xhakaza when 19 votes were quarantined.

The Adiwele slate’s last-minute inclusion of Tasneem Motara proved successful when she was elected as deputy secretary ahead of Nomathemba Mokgethi, who lost with 552 votes.

Lesufi’s slate took away the deputy chair position as Nomantu Nkomo-Ralehoko took 593 votes ahead of Mzi Khumalo, who garnered 522 votes.

The provincial chair’s faction was also victorious when it slipped its candidate Marokane Masuyope through with only one vote ahead of Paul Mojapelo, who received 556.

The conference faced a court challenge when one of its members, Jabulani Derick Sithole, a delegate of ward 33 in Ekurhuleni, filed an application to have it interdicted, asking the court to compel the provincial executive committee to make a declaration on the quarantined votes from his region.

The application was thrown out by the South Gauteng High Court.