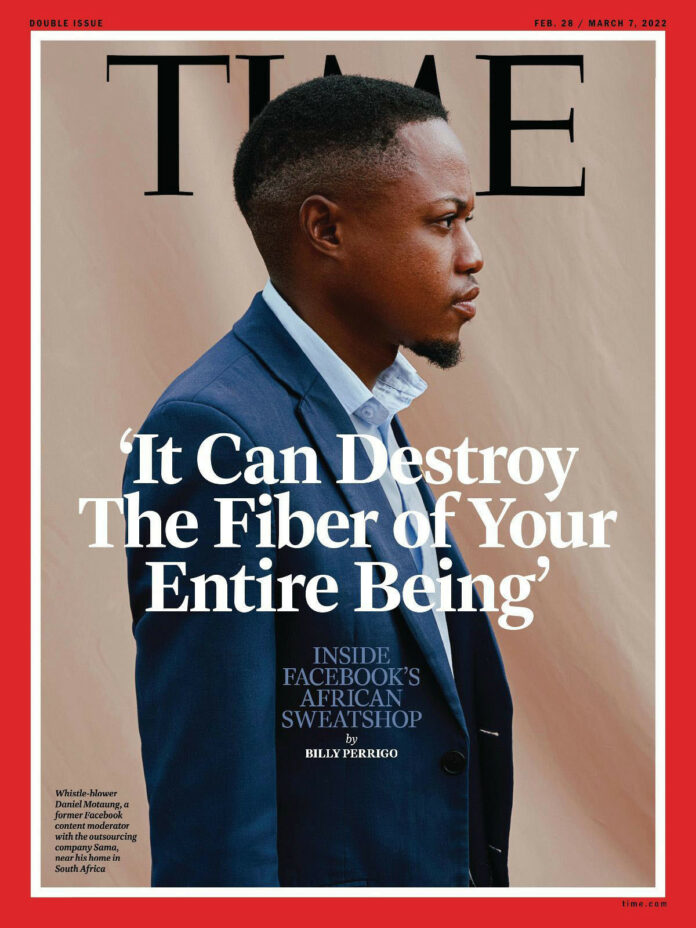 Last week, lawyers representing a 27-year-old former moderator of Facebook content wrote to the platform’s parent company, Meta, and a subcontractor firm, Sama, with legal letters demanding that the two companies improve how they treat workers — or be sued.

The saga promises to be the most public fight that Facebook has faced in Africa, barring the times governments blocked the social media platform.

In March 2019, Daniel Motaung, the South African taking on the global giant, began a new role as a content moderator at Sama’s offices in Nairobi.

Moderators are the internet’s first line of protection from violent, graphic, hateful and misleading content. They review posts and take down unsavoury ones.

Motaung, whose role was to handle Facebook content in isiZulu, says the first video he remembers moderating was a beheading.

Sama is Facebook’s main subcontractor for content moderation in Africa. It finds people to do this work and manages them. Neither Sama nor Meta revealed the value of the contract between them. But Accenture, a global consulting firm with offices in the United States, receives $500-million a year for performing similar work.

Sama, previously known as Samasource, started out as a nonprofit before going commercial. It presents itself as an organisation doing artificial intelligence in an ethical manner, by connecting the poor and unemployed, including refugees, to big technology firms for low-end jobs. It boasts of having lifted 50 000 people out of poverty in Africa and Asia.

Motaung came to a different conclusion as to why Sama hires the poor and job insecure.

“This is merely a way to find cheap labour, as many Western companies have done in the Global South,” he said.

“With this dynamic they can go find someone who is cheaper

and then you will be unemployed again.”

He lost his job soon after attempting to unionise his Sama colleagues.

He says they also worked long work hours that were monitored by software that measures one’s screen time and movement, and were paid less than content moderators elsewhere.

Many workers are from other African countries and their residence in Kenya is tied to the work permits that come with their jobs. Because they signed nondisclosure agreements, most workers are unwilling to speak on the record.

Thinking that collective bargaining might give everyone a bit more security in asking for more, Motaung organised a loose coalition of his colleagues, which then wrote to Sama’s management team asking for a meeting.

In August 2019, barely five months after he started on the job, Motaung was suspended and isolated from his colleagues. In a letter, Sama accused him of bullying and intimidating his colleagues, and putting its relationship with Facebook “at great risk”. Shortly thereafter, he was dismissed and had to leave Kenya.

Motaung and his lawyers say that what Sama did was tantamount to “unlawful union-busting action”.

Although Motaung no longer has to do the traumatising work of watching social media’s underbelly, he has nevertheless sent legal letters to Sama and Facebook, making 12 demands for fair treatment of content moderators who are still on the job — better pay, better-qualified and experienced health professionals and adequate mental health insurance. Sama and Facebook have until 19 April to respond to the demands or be sued.

“Sama installed this mentality that I should die in silence,” Motaung says, adding that he will not.

Sama declined to comment for this story, but a Meta spokesperson said: “We take our responsibility to the people who review content for Meta seriously and require our partners to provide industry-leading pay, benefits and support.

“We also encourage content reviewers to raise issues when

they become aware of them and regularly conduct independent audits to ensure our partners are meeting the high standards we expect of them.”

The plight of being a deafblind child in Africa: My personal experience