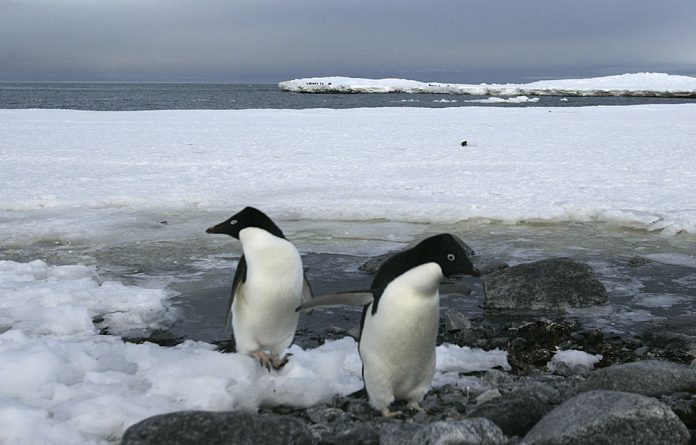 Ecologist Dr Bob Scholes has been writing daily emails from the Antarctic to his 13-year-old son about the work he is doing aboard the SA Agulhas, using state-of-the-art equipment to monitor the effect of global warming on the air and oceans. Christina Scott has edited a selection of his emails

Wednesday December 9 2009
Most people know me as an expert on the ecology of African savannas. What am I doing running a laboratory in the Southern Ocean? It all has to do with global warming. The burning of fossil fuels such as coal, oil and natural gas and the alteration of the land surface, for instance by clearing forests, is putting about eight billion tonnes of extra carbon into the atmosphere every year. But only about 3,5-billion tonnes stay there.

Where does the rest go? Well, about half goes into the oceans and half is taken up by land. I have been measuring the carbon uptake in African savannas, which is one of the land “sinks”. Now I am helping to measure the uptake in the Southern Ocean, one of the most important and least understood sinks of all.

Obviously, Mother Nature is giving us a big help by sucking up all that carbon. If not, we would be in much deeper trouble regarding ­global warming than we already are. But what if the capacity of the planet to help us out becomes exhausted? My work has helped to show that the storage capacity for carbon on land is limited and may become full within this century.

Many people thought that the oceans were so big that they would never become saturated with carbon dioxide. But the uptake by the oceans is slowing, especially in the Southern Ocean.

My colleague, Dr Pedro Monteiro, has equipped a very sophisticated laboratory on the SA Agulhas< to measure carbon dioxide and many other things as we sail across the ocean. He needed people to operate the equipment and I volunteered.

Friday December 18 2009
We saw our first iceberg, a big craggy one several kilometres to port, looking blue and evil in the early morning fog. The big ones show up clearly on the radar, so they are easy to avoid. The water is also full of small ones, called “growlers”, that stick up only about a metre above the waves. We have a lookout on the bridge at all times to steer us through them.

A huge piece of the Ross Ice Shelf — nearly the size of Gauteng — broke off a decade ago and a bit of that is currently blocking the entrance to our normal unloading spot. Pieces of ice shelf breaking free do not cause the sea level to rise (they are already floating, after all), but may act as the cork coming out of the bottle, allowing dammed-up ice on the continent itself to flow down to the sea. If all the ice in Antarctica were to melt, the oceans would rise by 150m.

Antarctica has been ice-free in summer in the distant past (hundreds of millions of years ago, in the time of dinosaurs). The amount of ice at the poles is a powerful feedback mechanism on the Earth’s climate. Snow and ice are bright and reflect the sun’s energy back into space.

Thursday December 31 2009
It is New Year’s Eve. The unloading is going well. Several teams fly off to Sanae 4 (the South African National Antarctic Expedition base inland) today. The weather is beautiful — cold but calm and sunny, after several days of howling wind and partial cloud. Things are about to get a bit crazy here.

The oceanography team was finally allowed off the ship and on to the ice. The price was that we had to pose, on the ice in front of the SA Agulhas, in as little clothing as was safe and more or less decent. That meant snow boots, funny hats and bikinis. It is for a good cause: the Sanae 50th year calendar. It was a real blast and of course the Adelie penguins came slithering and stumbling over to see what the fuss was.

Tuesday January 5 2010
We tried out our big CTD (conductivity, temperature and depth) bottle sampler for the first time yesterday. We have been measuring those things up until now using the underway probe. But the one thing the under way probe can’t do is bring back water samples from the different depths for us to analyse. For that we need a much bigger instrument — about as tall as me and 1.5m in diameter. Its proper name is a rosette sampler. We call it Rose.

We lower Rose down to the deepest level that we want to measure. She has 24 “bottles” (tubes really, with a trap door on an elastic at both ends) arranged in a cylinder, with an electronic trigger holding them open. When we send a signal down the cable, the doors on either end of the tubes snap shut, trapping the water from that depth inside. We then lift Rose to the next depth and close another bottle and continue until we have all the samples we need.

At the same time there are all sorts of other instruments attached to the frame, measuring how much sunlight there is for photosynthesis, the oxygen content and the chlorophyll fluorescence. They are switched on from the moment Rose enters the water and give us a “profile” on the way down. That allows us to work out exactly where we want to take samples on the way up. Sandy, the chief oceanographer, does that by just clicking on the screen.

My job, with the other men on the team, is to help Rose out of the door. She is rather heavy and a bit fat for the hatch in the side of the ship she has to squeeze through. Actually, Rose was bought for the new ship that is being built right now. There is a special crane that slides out, carrying her safely past the side of the ship before lowering it with a powerful winch. Of course, when the door is open, we are outside the ship, in the snow and freezing wind. So we are dressed in our full polar gear and are attached to the ship with harnesses, because there is nothing between us and the icy ocean.

When Rose comes back up dripping wet and is safely inside the ship, the oceanography team get to work. Each person has a particular analysis to do. They tap water out of the bottles and rush it into the lab, where it is measured out, filtered and treated with chemicals. We analyse the nitrate, urea, ammonia, phosphate, silicate, iron, oxygen and chlorophyll content of the water in the forward lab.

Samples are stored for more complicated analysis when we get back to Cape Town.

Tuesday January 12 2010
We are nose-in to the ice shelf. It is about 40m high here, which is taller than even the big crane in the front of the ship, and overhanging in a rather scary way in most places. We chose a vertical bit that did not look likely to fall on top of us. You can see the layers in the ice matching the different years of snowfall.

That is a really important source of climate data for the period before there were weather stations and atmospheric samplers. In the middle of Antarctica the ice is about 3km thick and they have drilled cores a long way down. When the ice is that thick it is under a lot of pressure, so it is hard and blue. The atmosphere that was trapped in between the snowflakes gets squeezed into bubbles in the ice and is perfectly preserved there.

The scientists keep the ice cores frozen until they get back to the lab; then they cut them up into sections, thaw them out under vacuum and analyse the atmosphere from hundreds of thousands of years ago. That is how we know that the carbon dioxide in the atmosphere has fluctuated in a very predictable way over the past half a million years.

It is also how we know that the steep rise in the past 150 years is not one of those natural cycles, but caused by humans.

Bob Scholes’ daily updates can be found at http://www.csir.co.za/