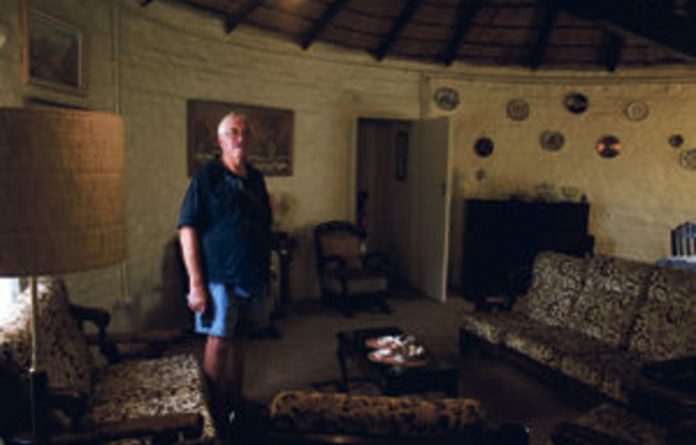 Piet Rheeder struggles to breathe as he walks the few metres down to the dam on the property.

He points to a browning stand of trees across the water: ‘It started with the poplars. Now the willows are dying … I’ve been a farm person all my life.

I’ve never seen a tree die just like that from nothing.” But the trees are the least of his worries. In 2001 his wife contracted cancer of the bowel, which spread rapidly to the rest of her body. ‘It was such an aggressive cancer that there was nothing one could do,” he said.

After she died, Rheeder worked abroad for three years. A few months after returning to the farm, he started having chest pains and difficulty in breathing.

Rheeder’s farm is 8km from South Deep, a Goldfields mine in Westonaria, and the Leeuspruit runs through his property. He believes his water supply has been contaminated with toxins from the nearby mining operation.

‘They’ve ruined us here,” said Rheeder. ‘I wouldn’t be surprised if I myself have contracted lung cancer.”

Nicci Simpson, a neighbour who runs a dog orphanage, can barely control her anger at the mine. She lost her husband to cancer shortly after moving to the area and in the past few years she’s seen 14 dogs and a cat die of the disease.

‘They couldn’t care less,” she said. ‘All of us are on retirement here. They know we’re going to kick the bucket.”

In a recent report, commissioned by South Deep Mine, environmental monitoring company African Environmental Development found that chemical samples showed a definitive ‘fingerprint” of mining activities in the Leeuspruit and Rheeder’s borehole.

‘In 2004 the Gauteng agriculture department found that the Leeuspruit was so contaminated that it could not be used for irrigation or drinking water for livestock,” said Mariette Liefferink, chief executive of the Federation for a Sustainable Environment.

Liefferink works to highlight the damage to communities caused by unsustainable mining practices. ‘I’m trying to get the mine to engage the farmers so the impacts can be mitigated,” she said.

Liefferink said there have been four meetings between landowners and the mines but some, like Simpson, have become disillusioned. ‘They say it’s ‘window-dressing’. The mines hear; they don’t listen. There’s no implementation,” said Liefferink.

Rheeder’s property is not the only one thought to be affected by water seeping out of the tailings dams and blowing dust. There’s a small community of farmers nestled in the valley alongside the Leeuspruit and many have a story to tell.

Next door horse-breeder René Laubscher lost his wife to cancer. His daughter also had cancer but is in remission now. Lately his granddaughter has become ill and has been taken for medical tests. Laubscher suspects she may also have the disease.

Sarel and Corne Cilliers also worry about their health. Sarel has seizures, for which he is on constant medication. He’s been for a battery of tests but ‘clinically, they can’t find anything wrong with him,” said his wife.

More recently he’s suffered from severe stomach cramps and can eat only toast. Corne too has been affected. After doctors found and removed an 8cm cyst from her womb, she has to see a gynaecologist for regular check-ups.

The Cilliers’s dogs have also been affected. They’ve lost nine in five years, all to cancer of the reproductive organs.

‘We don’t want to say it’s definitely this or that but there needs to be a discussion. There’s something going on here that’s abnormal,” said Corne.

Theo Lütt farms sheep nearby. In the past three years he’s noticed that more sheep miscarry, some lambs are stillborn and others are born deformed or blind.

A few weeks ago Lütt had his borehole water tested by an SABS approved company. One borehole was found to have a uranium count of 2.8mcg/litre [micrograms per litre], another a count of 452mcg/l.

According to Carl Albrecht, head of research at the Cancer Association of South Africa (Cansa), the internationally accepted safe limit for uranium in drinking water is 10mcg/litre. Albrecht said uranium levels as high as those found by Lütt could influence foetal development.

‘The worstcase scenario would be a malformed child,” he said, adding that similar effects could occur in animals. Lütt has now disconnected the more heavily contaminated borehole but said he is struggling to water his sheep each day.

‘I want the mines to leave us alone so we can work. If something happens, I want them to provide fresh water for me and my animals,” said Lütt.

Albrecht said environmental factors cause 90% of cancers, but argued that without a detailed study it was difficult to link the farmers’ illnesses to uranium contamination.

His one ‘glaring question” was: ‘Why isn’t there a publicly accessible report on the impact of heavy metals on human health?

South Africa is one of the world’s largest areas for uranium dumps — I can’t believe [a study] hasn’t been done.”

A Gold Fields spokesperson said: ‘In terms of legislation the company follows strict and very stringent criteria in terms of its water and dust environmental procedures and measurement processes at each of its operations, including the new South Deep project.

Without having details or any information pertaining to the specific issues raised, Gold Fields is not in a position to provide additional comment at this stage.”