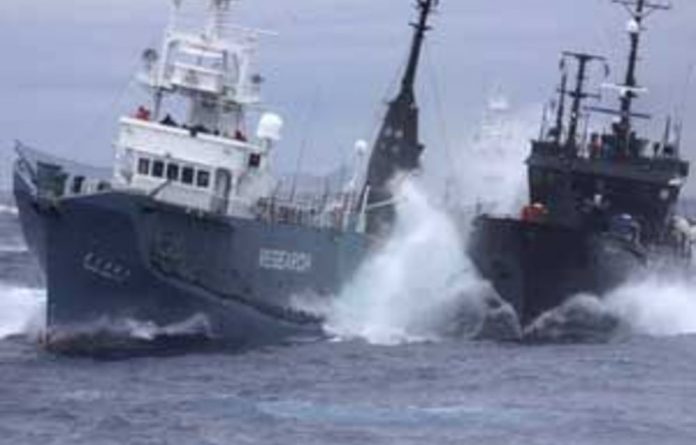 Anti-whaling activists said on Tuesday they had exchanged water cannon fire with Japanese fishermen after ambushing them in Antarctic waters.

The Sea Shepherd group, which has been pursuing the fishing fleet since December, said its Steve Irwin ship waited behind an iceberg before surprising Japan’s Nisshin Maru whaling boat.

“As the Steve Irwin passed by the Nisshin Maru, the factory ship turned on their water cannons and were surprised when the Steve Irwin responded with a more powerful water cannon that had a couple of the whalers diving for the bridge doors as the frigid water struck their bridge wing deck,” the group said in a statement.

Last month, the group’s futuristic Ady Gil powerboat was sliced in two and sank after a collision with one of the Japanese ships.

The activists claim to have saved the lives of hundreds of whales by harassing the annual hunt, which kills the animals using a loophole in an international moratorium which allows “lethal research”.

“It does not matter where they go, east or west along the Antarctic coast,” said Steve Irwin First Officer Locky MacLean.

“We intend to stick to their rear like glue and we will not allow a single whale to be loaded on to the decks of that foul floating abattoir.”

Australia and New Zealand have called for restraint from both sides with the activists deploying laser-like devices and stink bombs, and the Japanese fleet operating military-style acoustic weapons. — AFP