Steyn: The man with the plan 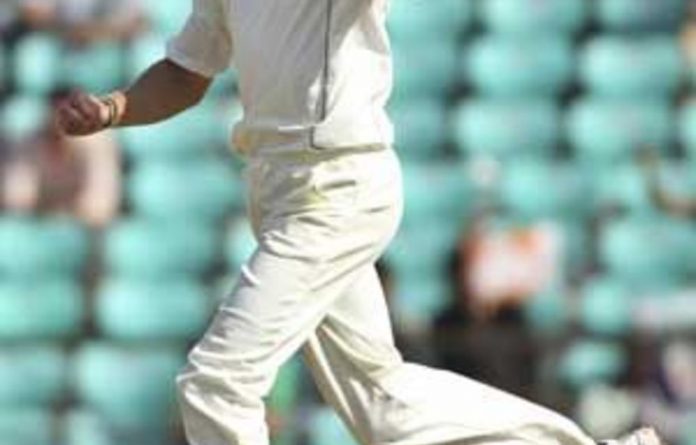 South Africa fast bowler Dale Steyn attributed his success with the ball on Monday to detailed planning before the start of the two-Test series against India.

Steyn, 26, picked up a career-best seven wickets for 51 runs to rout India’s first innings for 233 on the third day of the first Test at the Vidarbha Cricket Association stadium in Nagpur.

He then took his eighth wicket of the match when he had Virender Sehwag caught in the slips for 16 during India’s follow on.

“Before the Test started, we said that reverse swing was going to be key on these pitches,” Steyn said at a press conference after the day’s play.

“We knew we will not get a lot of sideways movement off the wicket. Since there’s not a lot of grass on the wicket, you’ve got to rely on getting the ball to do something through the air.

“I said before that a ball bowled at 145 kilometres per hour, whether it’s in Johannesburg or Nagpur, is still 145ks in the air. The plan was to hit the deck hard, with pace.

Game plan
“This type of stuff just doesn’t happen out in the middle. We have really planned it.”

Steyn’s performance brought back memories of the 2008 Ahmedabad Test where he collected five wickets to bowl out India for 76 and set up a memorable South Africa victory.

Steyn was almost unplayable after the tea break on Monday, rattling the stumps thrice with his devastating reverse swing.

“It is something I have been working a lot with in the nets,” he said. “I don’t want to reveal all my secrets. You work on these things and then it’s nice to see guys shoulder arms and then the ball cannons into the stumps.

“I got [Ian] Bell like that in Johannesburg and that was where it started from. It’s a skill that you have to have in your armoury as a pace bowler.”

Steyn said he set up Murali Vijay, batting at number three in place of an injured Rahud Dravid, before finally getting his scalp.

“I worked him [Vijay] out quite nicely with two balls that went away and then bringing one back in which he left.”

The bowler, who has claimed 193 wickets from 37 Tests so far, also revealed that coach Corrie van Zyl’s words motivated him to go after the Indian batting.

“Corrie sat us down at tea and said that the session after lunch wasn’t good enough. We didn’t get the wickets that we wanted.

“He said you’ve already been out in the field four hours and now you’ve got to go and do another two. Little speeches like that can really lift the players a lot.” — AFP