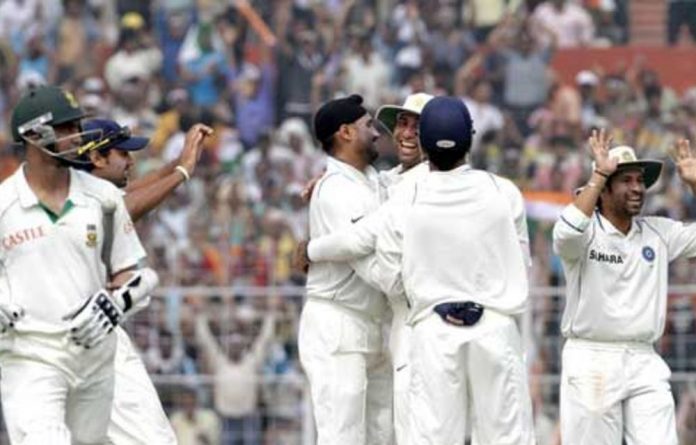 South Africa were struggling to save the second and final Test against India after losing three key wickets in a rain-curtailed fourth day’s play on Wednesday.

Leg-spinner Amit Mishra sent back skipper Graeme Smith (20) and Jacques Kallis (20), and Harbhajan Singh dismissed Alviro Petersen as South Africa stuttered to 111-3 by tea at the Eden Gardens in Kolkata.

Hashim Amla was unbeaten on 45 and Ashwell Prince was yet to open his account at the break, which was taken early due to rain.

South Africa, who made 296 in their first innings, still trail India by 236 runs with seven wickets in hand.

The tourists need a draw to win their first Test series in India for a decade and reclaim the top spot in the official rankings from Dhoni’s men, after winning the opening match in Nagpur by an innings and six runs.

The Turbanator
Off-spinner Harbhajan gave India the breakthrough in the post-lunch session when he got rid of first-innings centurion Petersen (21) in his second over after the break.

The debutant opener was foxed by a delivery that found the inside edge of his bat and popped up to short leg where Subramaniam Badrinath latched on to the head-high catch on second attempt.

Kallis shaped up to defend against Mishra but offered an outside edge to Mahendra Singh Dhoni behind the stumps. He shared 57 runs for the third wicket with Amla.

Earlier, only 14 overs were bowled in the morning session after a wet outfield delayed start of play by 90 minutes.

Smith and Petersen played with caution after resuming at the overnight total of 6-0, until Mishra was brought into attack in the 13th over.

Mishra struck off his first delivery, trapping Smith in front of the wicket to cap a miserable outing for the South African skipper in the Test series. Smith scored just 30 runs in the series.

The Test series will be followed by three one-day internationals at Jaipur, Gwalior and Ahmedabad. — AFP