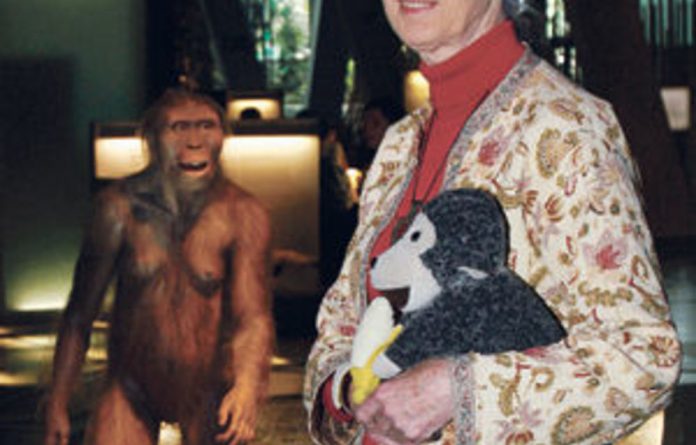 ‘If we stop now, everything’s going to go. So we have to keep on doing our best for as long as we can, and if we’re going to die, let’s die fighting.”

Jane Goodall, the scientist-turned-environmentalist, has just arrived from Bournemouth, on the south coast of England.

The world seems to be divided into people who are besotted with Goodall and people who have barely heard of her. She is more prominent in the United States, where the Jane Goodall Institute is headquartered, than in the United Kingdom, where she was born in 1934.

After half a lifetime spent documenting the lives of chimpanzees in the Gombe Stream National Park overlooking Lake Tanganyika in the far west of Tanzania, she now lives with her sister, Judy, in their old family home in Bournemouth.

Our meeting, though, takes place at an apartment in Notting Hill, West London, belonging to Mary Lewis, an employee of the Jane Goodall Institute, with a cut-glass English accent, who appears to run Goodall’s life as thought it was a military operation.

The trigger is a book Goodall has written with two fellow environmentalists: a collection of stories of survival called Hope for Animals and Their World. These days, in her mid-70s, Goodall is more shaman than scientist. She has set aside a companion volume to her seminal study, The Chimpanzees of Gombe, and instead tours the world preaching the need for sustainability, harmony and respect for the natural world.

It was in 1986, at a conference on chimps, that she realised the extent of the crisis across Africa. Overnight, it seems, she began a life as an environmental evangelist.

One journalist who has followed her career likens her to a ‘peripatetic Mother Teresa”. It’s a good description: she combines stateliness with a kind of holiness, her religion a predominantly green one.

‘My job seems to have increasingly become one of giving people hope so that instead of doing nothing and sinking into depression, they take action,” she says. ‘It’s clear to me that unless we get a critical mass of people involved in trying to create a better world for our great-grandchildren, we’d better stop having children altogether.”

Goodall has chosen to focus on the heroes fighting (and occasionally winning) individual battles, hoping to attract others to take part in a war she does not accept as lost.

‘I’ve seen areas totally despoiled that have been brought back to life. Animals that were almost gone have, with captive breeding or protection in the wild, been given another chance. If we stop now, everything’s going to go. So we have to keep on doing our best for as long as we can, and if we’re going to die, let’s die fighting.”

The apocalypse is conjured up in a croaky and curiously detached monotone. Do governments understand the scale of the crisis?

Goodall argues that many are still in hock to ‘dark forces” — vested interests such as the fossil fuel industry and agribusiness. Politicians, she says, should stop parroting the myth of limitless expansion.

‘Unlimited economic growth on a planet of finite resources is not possible; it doesn’t make sense.” Much of her evangelising is directed at the young.

Her institute has a dynamic youth wing called Roots and Shoots, which started in 1991 when 16 young Tanzanians met on the porch of her home in Dar es Salaam to discuss environmental
issues affecting their lives. Twenty years later there are groups in 114 countries.

After a slow start, it has taken off in the UK, with 700 groups now participating. But most of the Jane Goodall Institutes that coordinate these projects are shoestring operations.

The institute has been hit hard by the credit crunch. ‘We’re in a financial hole in the US because of the downturn,” Goodall admits. ‘Money that should have come in has been cut.”

The organisation had just met in Belgium to discuss recruiting an executive director. Is that recognition that someone needs to take over from her?

‘Of course,” Goodall says. Despite the holiness, she is not guilty of false modesty. The institute today is not just concerned about her beloved chimps. ‘To me, it was obvious to grow from wild chimps to saving their forest, to seeing about their conditions in captivity, to working with local people and kids,” she says.

‘You can kill yourself saving forests and chimps, but if new generations aren’t going to be better stewards there’s no point. That’s why I’m so passionate about Roots and Shoots.”

Until the 1986 conference, she assumed she would spend her life studying chimps. ‘It was wonderful out in the forest collecting data and analysing it, giving a few lectures, writing books.”

In her 1999 book, Reason for Hope: A Spiritual Journey, she says that as a Biblereading teenager, she ‘fantasised about becoming a martyr”. Is she still a Christian? ‘I suppose so; I was raised as a Christian.”

She says she sees no contradiction between evolution and a belief in God. Neither does she blame the Bible and the idea in Genesis that man has dominion over plants and animals for exploitation of the natural world (she says ‘dominion” is a mistranslation; what is meant is ‘stewardship”).

These might seem academic points, but they may be key to understanding her transition from scientist to eco-evangelist — and the resonance of her message in the more spiritually aware US.

‘I realised that my experience in the forest, my understanding of the chimpanzees, had given me a new perspective,” she writes. ‘I was utterly convinced there was a great spiritual power that we call God, Allah or Brahma, although I knew, equally certainly, that my finite mind could never comprehend its form or nature.”

This year is significant for Goodall and her institute, marking 50 years since she began studying chimps at Gombe. As well as the new book, there will be a BBC documentary and a German-made film, Jane’s Journey, which will be premiered at Cannes.

It is indeed a remarkable journey, from a middle-class home in Bournemouth to secretarial work in London and then, thanks to the patronage of paleontologist Louis Leakey, to Gombe and beyond.

‘I loved animals as a child, read the Tarzan books and decided at the age of 11 that I would go to Africa, live with animals and write books about them,” she says. ‘Everybody laughed at me except my amazing mother, who said, ‘If you work hard and really want something and never give up, you will find a way.’”

In 1957 Goodall went on an extended visit to a school friend in Kenya. Someone suggested she get in touch with Leakey, a formidable figure who was then curator of the Coryndon museum of natural history in Nairobi.

He barked at her down the telephone when she called on spec, but she kept her nerve, got an appointment to see him, was given an admin job and, in 1960, was given the chance to move to Gombe to start collecting data on chimps.

Leakey also despatched Dian Fossey to Rwanda to study gorillas and Birute Galdikas to Borneo
to observe orangutans. What did Leakey see in Goodall that made him choose her for Gombe?

‘I think he was amazed that a young girl straight out from England with no university degree knew so much,” she says. ‘I’d spent hours in the Natural History Museum in London and could answer most of his questions.”

Goodall had planned to spend only a year in Africa but was there more than 30. She still has a home in Dar es Salaam and makes the long trek to Gombe when she can.

She learned her science in the field, but Leakey was keen for her to get academic training and, in the mid-60s, she did a PhD at Cambridge in ethology, the study of animal behaviour.

She needed the qualification to counter critics who attacked her approach as unscientific and anthropomorphic — she gave the chimps she studied names and prided herself on getting to know them as individuals.

‘I was told at Cambridge I shouldn’t have named the chimps and that they should have had numbers,” she says. ‘I wasn’t allowed to talk about them having personalities and certainly not about them thinking or having emotions. But then I thought back to my childhood teacher who taught me that this wasn’t true — my dog.”

The scale of Goodall’s observational data eventually silenced her critics. She was the first scientist to observe an animal, her favourite chimp David Greybeard, not just using a tool (a stem of grass poked into a termites’ nest to dig out the insects), but also fashioning it for that purpose.

When she telegraphed a report of what she had seen to Leakey, he replied: ‘Ah! Now we must redefine man, redefine tool, or accept chimpanzees as human.”

In his introduction to a revised edition of Goodall’s most famous book, In the Shadow of Man, the biologist Stephen Jay Gould called her work ‘one of the Western world’s great scientific achievements”.–

Race on to secure life after Kyoto