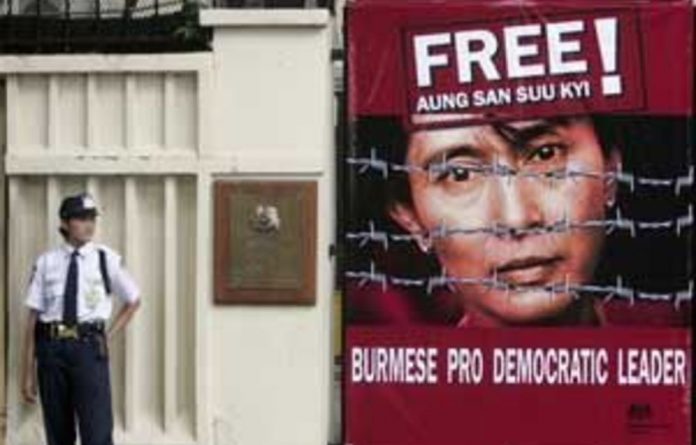 Burma’s Supreme Court on Friday rejected an appeal by Aung San Suu Kyi against her extended house arrest, her lawyer said, keeping her in detention ahead of elections promised by the junta this year.

The 64-year-old opposition leader had her incarceration lengthened by 18 months in August 2009 after being convicted over a bizarre incident in which an American man swam to her lakeside home in Rangoon.

Her legal team immediately vowed to lodge a fresh appeal with Burma’s chief justice, the last avenue available to them for challenging her detention. Suu Kyi was not in court to hear Friday’s verdict.

“The appeal was rejected. We do not know the reason,” Nyan Win, her lawyer and the spokesperson for her National League for Democracy (NLD), said outside the court.

“We will go for a fresh appeal,” he added.

A Burma official confirmed that the court had rejected the appeal, as well as those of Suu Kyi’s two female live-in assistants against similar periods of detention.

‘She should be released immediately’
Foreign ambassadors including the British, French and Australian envoys went to the court to hear the verdict.

“The court rejected the appeal, it came as no surprise to us,” French ambassador Jean-Pierre Lafosse said. “She should be released immediately as one of the conditions for real national reconciliation.”

A lower court threw out an initial appeal against her house arrest in October.

Nobel Peace laureate Suu Kyi has already spent 14 of the past 20 years in jail or under house arrest since the country’s last elections in 1990, which the NLD won by a landslide.

Burma’s ruling junta then prevented the party from taking power.

Suu Kyi has previously dismissed comments by Home Affairs Minister Maung Oo, who reportedly said she would be released in November, as “unfair” ahead of any court decision.

Junta chief Than Shwe has promised to hold elections at some point this year under his “roadmap to democracy” but has refused so far to set a date. Critics say the polls are aimed at simply entrenching the generals’ power.

Suu Kyi is effectively barred from standing in the promised vote and a quarter of the parliamentary seats up for grabs are reserved for the military.

She has said it is too early for her party to decide whether to participate in the elections while freedom of expression remains elusive.

At least 2 100 other political prisoners remain behind bars in Burma, according to United Nations (UN) figures.

Friday’s ruling comes a week after UN human rights envoy Tomas Ojea Quintana visited the country, saying as he left that he “deeply regretted” being refused access to Suu Kyi during his five-day trip.

Mixed signals
Burma’s government has given out mixed signals ahead of the polls, in mid-February releasing deputy NLD leader Tin Oo after seven years of detention, but days later jailing a US activist for three years.

The regime jailed a further five dissidents during the visit by the UN special rapporteur.

Suu Kyi herself has made efforts to defrost relations with the military leaders, writing twice to Than Shwe since September to offer help in getting Western economic sanctions lifted and asking to meet with him.

The government’s official liaison officer met with Suu Kyi in January — the fourth meeting since last September as both sides tentatively renew dialogue.

Last November the authorities allowed her to make a rare appearance in front of the media after she held talks with US Assistant Secretary of State Kurt Campbell, the most senior Washington official to visit Burma for 14 years.

US President Barack Obama’s administration has been pursuing greater engagement with the Burma regime after deciding that sanctions alone were not working. — AFP