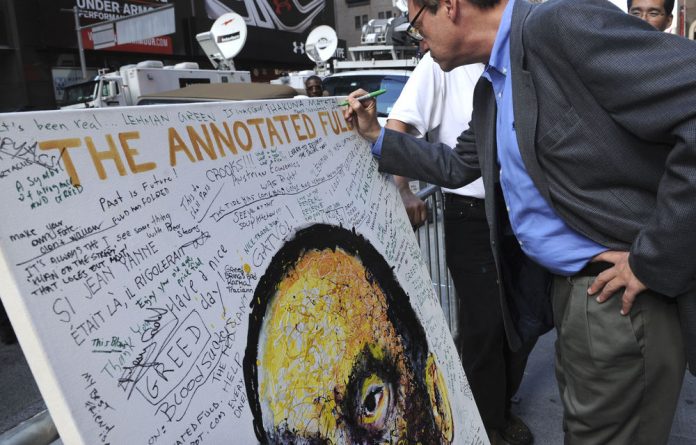 A court-appointed United States bankruptcy examiner has concluded there are grounds for legal claims against top Lehman Brothers bosses and auditor Ernst & Young for signing off misleading accounting statements in the run-up to the collapse of the Wall Street bank in 2008, which sparked the worst financial crisis since the Great Depression.

A judge this week unsealed a 2200-page forensic report by expert Anton Valukis into Lehman’s collapse that includes scathing criticism of accounting “gimmicks” used by the failing bank to buy itself time. These included a contentious technique known as “Repo 105” which temporarily boosted the bank’s balance sheet by as much as $50-billion.

The exhaustive account reveals that Barclays, which bought Lehman’s US businesses out of bankruptcy, got equipment and assets it was not entitled to. And it reveals that during Lehman’s final few hours, chief executive Dick Fuld tried to get British Prime Minister Gordon Brown involved to overrule Britain’s Financial Services Authority (FSA) when it refused to fast-track a rescue by Barclays.

With Wall Street shaken by the demise of Bear Stearns in March 2008, Valukis said confidence in Lehman had been eroded: “To buy itself more time, to maintain that critical confidence, Lehman painted a misleading picture of its financial condition.”

Valukis said the bank tried to lower its leverage ratio, a key measure for credit-rating agencies, with Repo 105 — through which it temporarily sold assets, with an obligation to repurchase them days later, at the end of financial quarters, in order to get a temporary influx of cash. Lehman’s own financial staff described this as an “accounting gimmick” and a “lazy way” to meet balance-sheet targets.

A senior Lehman vice-president, Matthew Lee, tried to blow the whistle by alerting top management and Ernst & Young. But the auditing firm “took virtually no action to investigate”.

During the bank’s final hours in September 2008, Fuld tried desperately to strike a rescue deal with Barclays but the FSA would not allow the British bank an exemption from seeking time-consuming shareholder approval. The British finance minister, Alistair Darling, declined to intervene and Fuld appealed to the US treasury secretary, Henry Paulson, to contact Brown.

In a “brainstorming” session, Fuld then suggested getting the president’s brother, Jeb Bush, who was a Lehman adviser, to get the White House to lean on Downing Street.

Barclays eventually bought the remnants of Lehman’s Wall Street operation from receivership for $1,75-billion — a sum that has enraged some bankruptcy creditors who believe it was a windfall for the British bank.

The examiner’s report finds grounds for claims against Barclays for taking assets it was not entitled to, including office equipment and client records belonging to a Lehman affiliate, although it says these were not of material value to the deal — the equipment was worth less than $10-million.

A lawyer for Fuld last night rejected the examiner’s findings. Patricia Hynes, of Allen & Overy, said Fuld did not structure or negotiate the Repo 105 transactions, nor was he aware of their accounting treatment.

She added that Fuld “throughout his career faithfully and diligently worked in the interests of Lehman and its stakeholders”.

A spokesman for Ernst & Young, which has its headquarters in London, told Reuters the firm had no immediate comment because it was yet to review the findings. —