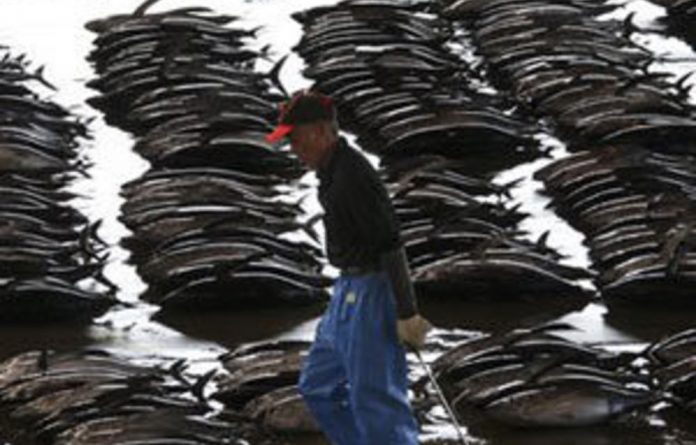 The 175-nation Convention on International Trade in Endangered Species, or Cites, opened two weeks ago with the US and Europe calling for an agreement on measures that would be a lifeline to overfished oceans.

However, the summit ended on Friday with some conservationists visibly distressed. A combination of the Japan-led lobby and poor nations concerned that regulations would hit their fishing industries as they were attempting to emerge from recession hampered any accord on the protection of marine species.

“This conference has been a disaster for conservation,” said Oliver Knowles of Greenpeace. “Country after country has come out at this meeting arguing for business as usual and continued trade in wildlife species that are already devastated by human activity.”

A bid to ban the international export of Atlantic bluefin tuna, a key ingredient in sushi, was killed along with regulations on the pink and red coral trade. Six species of sharks failed to get protection despite studies showing their numbers had fallen by as much as 85% due to the booming fin trade in China and other parts of Asia.

The sole shark to get some measure of protection, the porbeagle shark, lost it on the final day when Asian nations reopened the debate and voted down regulations. Some conservationists were visibly distraught when the vote tally was read.

“This is a significant setback for these marine species but we view it as only a temporary setback,” said Tom Strickland, who headed the American delegation. “We will redouble our efforts with other countries around the world to fight for the protection of marine species imperilled by international trade.”

But these protection measures were overshadowed by concerns that Cites had been transformed into a body driven by big money and trade. Some compared it to the UN climate conference at Copenhagen, where decisions were often made in back rooms by world leaders.

“The minute money gets involved, everything is different,” Cites secretary general Willem Wijnstekers said. Japan led the campaign against the listing of marine species and spent months before the meeting lobbying aggressively.

They held a reception for select representatives at their embassy in Qatar, offering Atlantic bluefin tuna sushi — a typical food served at Japanese formal occasions — the night before the vote on the export ban of the overfished species.

Hisashi Endo, the director of the ecosystem and conservation office in the Fisheries Agency of Japan, defended its delegates. He argued that regional fisheries bodies were better suited to regulate marine species and that the Cites ban was unfair.

Tactics beyond diplomacy
“We are not pressuring anyone,” Endo said. “We are talking to many countries and expressing our opinion and seeking their understanding.”

However, some delegates accused Japan of using tactics that went beyond diplomacy and violated the spirit of Cites.

Kenya, which fought the Japanese position on tuna, accused Tokyo of pressuring delegates to support its positions and paying fisheries officials from unnamed African countries to attend the conference.

“The way we have seen this conference operate, there is a lot of influence that is quite unnecessary,” said Patrick Omondi from the Kenya delegation. “That is not very good for species that are affected by trade.”

Masanori Miyahara, chief counsellor of the Fisheries Agency of Japan, acknowledged that Japanese government funds were used by nations to attend Cites and other fisheries conferences.

“Participation is very important for them to learn what is going on internationally,” he said. “They use the money for tuna regional fisheries management meeting and other meetings.”

But Miyahara denied his government “was buying votes” with such funding or bluefin tuna at its reception. “We wanted to show what it is,” Miyahara said of the tuna sushi. “You can’t buy the vote by just serving bluefin tuna. That’s a silly idea.” – guardian.co.uk