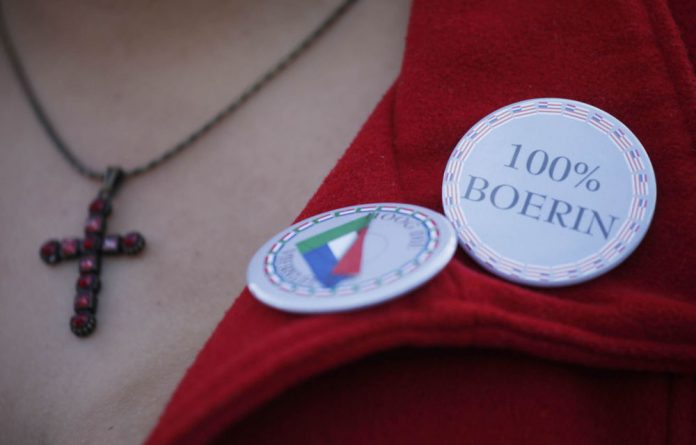 You can tell a lot about a man and his struggles from his shirt.

Fast forwarding to the present, the cue-card simplicity of grassroots couture hasn’t changed much.

Communists and trade unions generally prefer to do business in red shirts. Thailand’s Red Shirts, are mostly poor, rural people who wear, um, red shirts, and seek to topple their government. As we speak their ongoing rallies and protests have brought Bangkok to its knees, thereby seriously disrupting post-tsunami tourism, the price of silk pyjamas and the kind of sex you can’t so easily get at home.

The national football team’s kit is worn with fierce pride by increasing numbers of South Africans in the run up to the World Cup. In the case of Bafana Bafana shirt-wearers this fierce pride does not signal intent to kill the opposition, except in the most sporting sense.

But there is another kind of shirt making headlines in South Africa this week. The classic farmer’s shirt has long been a staple sight for sore eyes in rural towns and villages. It is a roomy, pebble-coloured garment with short flappy sleeves and breast pockets big enough to hold a Leatherman and a pack of 30s. The pockets come in a choice of 100% — Man colours — sludge blue and muddy green. When not on top of a tractor, the shirt can be viewed in bulk, forming a beefy queue in the butchery or bottle store on a Saturday morning when the farmer comes to town. It is the farmer’s uniform and it says two important things about him: he is not gay, and even if he is, his wife still buys his clothes.

In recent times, and most visibly since the murder of AWB leader Eugene Terre’Blanche, the shirt has come to stand for more. The slogan “100% Boer” has been stitched or ironed — I don’t think Cape Union Mart offers this service — across the shoulders of the shirt, thus transforming it from a mere fashion disaster into a political statement.

I think of these men as the Farmer Brownshirts. Then again, if real South African farmers went around reading their chickens bedtime stories, we wouldn’t be having this chat.

In the grand scheme of things — such as Julius Malema re-igniting the fashion for singing old war tunes about killing the folk inside them — the 100% Boer shirts shouldn’t press anyone’s buttons. It may be a forceful assertion of identity. It may be a defensive response to “kill the boer” sentiments. It may even be an ironic comment on other campaigning slogans like “100% Zulu Boy” popularised on T-shirts during Jacob Zuma’s troubles with the law, although an Afrikaans colleague says I shouldn’t count on the irony angle. But hate speech it ain’t, which made it a bit surprising when shirts bearing the 100% Boer slogan were banned last week by the organisers of the Little Karoo National Arts Festival.

Days later, outside the court where Terre’Blanche’s alleged killers made their first appearance, the 100% Boers rolled up their sleeves. A woman was snapped wearing a “100% Boerin” badge on her lapel — a subtler statement that located her in the political theatre, but kept her out of the Fashion Emergency Room. On the other side of the police razor wire, an angry man was being interviewed for TV. He was wearing a red T-shirt that said “Do it for Chris Hani”.

The words didn’t make complete sense to me (do what?) but the fact that his T-shirt was red cleared up any confusion about where he stood on the ET issue. Rightwingers and game rangers like brown. Lefties and sex workers like red.

There is another political category of shirt wearer that entered the news charts this week: the Stuffed Shirt.

The old school, and even older money members of the world’s snootiest golf club, Augusta, insisted that Tiger Woods hold another mea culpa press conference before teeing off in his comeback play at the US Masters.

It was squirmy to watch Woods yank out his dirty linen again. The shame he feels for hurting his family, the new respect he has for loyal golf fans, blah blah blah and, with no pun intended, how “I’m going to try and not get as hot when I play”, referring to his bad temper.

The Stuffed Shirts of Augusta, where women may not play at all and where the first black member was admitted as recently as 1990, were satisfied. Augusta makes South Africa’s 1990 apartheid government look like Red Shirts.

But golf, even Tiger golf, doesn’t have sufficient popular appeal to get Malema hot under the collar. If it did, he might start singing a different tune.