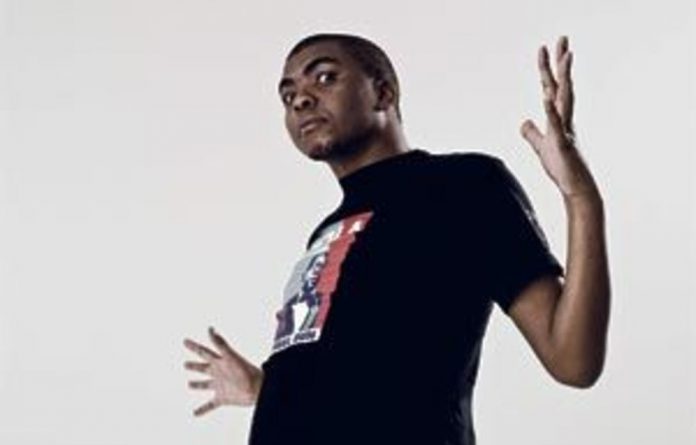 Outrageous, the feature film about South Africa’s big-name stand-up comedians, is meant to be more than just a barrel of gags thrown at a half-drunk audience.

Produced by Anant Singh and John Vlismas, the movie takes its audience on a gritty journey with comedians one knows well from the stand-up circuit. The plot moves from one stage to another; it travels backstage and takes us on rides in minibuses to gigs and to brainstorming sessions in restaurants, with household names such as Barry Hilton and Loyiso Gola.

Producer Vlismas swung by the Mail & Guardian‘s offices in Rosebank this week. He said: “We wanted to take the audience behind the scenes. We wanted to show them how the comics approach gigs. We are always asked questions like: ‘What is he like at home?’ or ‘Are you funny all the time?'”

The risk is that it could all have fallen flat. What if the comedians weren’t funny off stage — what then? Well, luckily that’s a question we don’t have to answer because Outrageous is, in fact, a laugh-a-line movie, sometimes unwittingly.

Directed by one-time comedian and commercials director Bevan Cullinan, it features what could best be described as a South African Rat Pack: Vlismas, Hilton, Gola, Mark Banks, Joey Rasdien, Riaad Moosa and Krijay Govender. The gang is predictably irreverent, poking fun at everything South African, from President Jacob Zuma to blacks in general. At one stage Vlismas said of Zuma: “Jake is my hero. Any man prepared to take three fat chicks out of circulation gets my vote. He swapped three little cows for three fat pigs.”

Although politicians are legitimate targets for comics, Gola fixes his stare on the black community in general, examining deeper malaises that affect it. For instance, the Cape Town-born comic returns to a favourite topic: the low level of reading among black people. Blacks, he said, don’t read because “under apartheid, if they could they’d probably get blown up by letter bombs”. All this Gola said with deep-voiced mock-seriousness.

Outrageous has been gestating for about nine years. At the turn of the century, film producer Singh and veteran comic Vlismas, a regular at corporate comedy sessions (capitalists need to be entertained, even while they’re exploiting the rest of us), had the idea of making a movie about comedy.

Unlike Spike Lee’s The Original Kings of Comedy (2000), which focused more on the audience, they wanted their production to throw the spotlight on the comics themselves — the humour factory. They wanted the film to churn inwards, towards a centre: “We wrote provocative statements that we threw at the cast to get everyone talking,” said Vlismas, who for our interview was accompanied by his nine-year-old daughter, Uma-Rose.

The cast in the film represents each of the population groups of the country — so at least the humour comes in from all sides. Women are under-represented, though, as I am sure they are in comedy in general, and Govender is the only female comic in the movie.

“There was a brief, yet you don’t want to socially engineer comedy,” Vlismas said. “It’s done its own thing and has grown organically. There is no single comedian in the movie that I didn’t want to work with.”

The producers of the film wanted to catch the comics in their unguarded moments and so left the camera to record unobtrusively. The result is somewhat revealing scenes of the comics wildly musing, without that prepared stance and stage persona they assume when they stand before an audience. “We wanted to break the misconceptions that comedians are dark people,” said Vlismas.

Comics might be dark people but it’s not the darkness that makes the audience laugh. “The agenda is to make people laugh. You can’t be a comic if you just make people think.” The point is that comedy is an appointment of opposites. When laughter cloaks the serious, there is a tryst between darkness and light. “What’s the point of expressing your higher functions if you aren’t in touch with your lower ones?” Vlismas said.

But there are limits, to be sure. Although there are no set rules, the comic must impose a personal limitation. Genocide, for instance, is beyond the reach of Vlismas’s humour, and he’s “not a big expert on world religions”. Yet belonging to a religion doesn’t preclude one from excelling in the humour industry. According to Vlismas: “Moosa is a devout Muslim and a great comedian.”
Elsewhere in the film Moosa is referred to as belonging to the comedic wing of al-Qaeda.

It’s stuff he’s prepared to take to predominantly black audiences. And at some of these sessions, in Polokwane, in Pretoria and other areas, “the energy you get is amazing”. His brinkmanship even got an acknowledgment from fellow comic David Kau, who told him he wouldn’t dare say some of the things Vlismas said. But it works well, he is keen to underline, when his audience realises that “it’s all harmless”.

Politicians are fodder, though. He is quite keen to make distinctions, though, to separate the governing party from the government — perhaps befitting someone who spends his time sifting the funny from the not-so-funny.

I ask him whether he thinks the South African audience has matured and is ready for a roller-coaster ride on mountain cliffs where satire is not always distinguishable from insults. “South Africans are gutsy,” he said. “Canadians will faint at some of the stuff we talk about here.”

The stand-up comedy sessions are, in a sense, the only occasions at which insults and slurs — that anywhere else could get you dragged to the Human Rights Commission or, even worse, to the country’s courts — are received with an embarrassed laugh and momentary discomfort. The jam sessions are a public forum where we air our prejudices and discomforts about the other. “Everybody does racial referencing,” Vlismas said and, in part, it’s because “at a subtle level we are all racists”.

It’s a status quo that draws envious glances from fellow comics. Once, when he was in London, a British comedian enviously told him that they [South Africans comics] had it easy. “All we talk about is the tube,” the comedian complained to him.

If South Africa’s comedians seemingly enjoy carte blanche, it’s because “laughter in this place is more relevant and vital than anywhere else”.