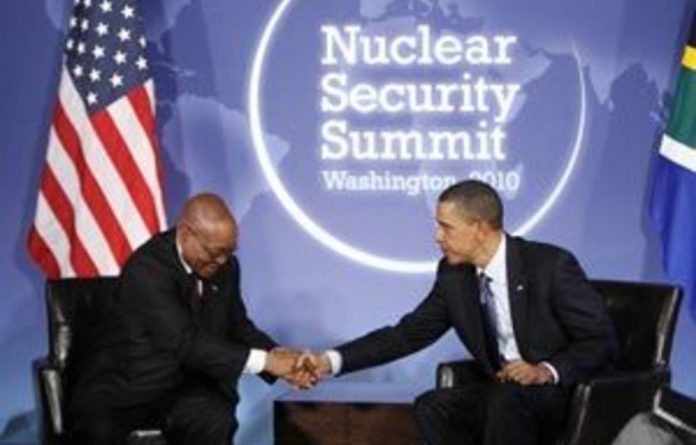 United States President Barack Obama on Sunday heaped praise on South Africa for taking the decision to become the first country to abandon a nuclear weapons programme, as he met President Jacob Zuma.

Obama met Zuma amid a string of bilateral meetings with world leaders on the eve of a 47-nation nuclear security summit, designed to draw commitments from key powers to keep loose nuclear material out of the hands of extremist groups.

“South Africa is singular in having had a nuclear weapon program, had moved forward on it, and then decided this was not the right path,” Obama said, noting how South African had since been a leader on non-proliferation.

“South Africa has special standing in being a moral leader on this issue. And I wanted to publicly compliment President Zuma and his administration for the leadership they’ve shown,” Obama said.

“And we are looking forward toward the possibility of them helping to guide other countries down a similar direction of non-proliferation.”

South Africa abandoned its nuclear weapons program in the 1990s and the International Atomic Energy Agency certified in 1994 that the programme had been fully dismantled. — Sapa-AFP