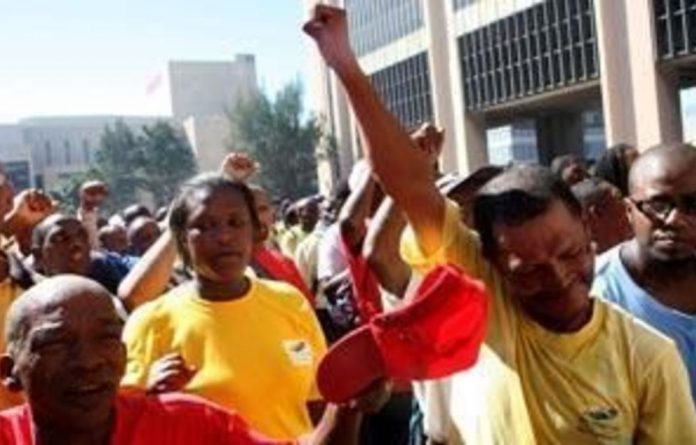 Striking municipal workers halted picketing on Friday to be briefed on a new offer by the employers, a union spokesperson said.

“There’s nothing planned for today as branch representatives around the country meet with workers to solicit a mandate that Salga [the South African Local Government Association] has brought to the table,” South African Municipal Workers’ Union (Samwu) spokesperson Tahir Sema told said.

“Samwu’s 35 branches nationally will meet with workers to see what the general consensus on the matter is.”

Johannesburg members were addressed at 10am.

“I cannot say right now what the general feeling is as certain regions haven’t been briefed as yet.”

He said Samwu was optimistic after marathon talks with Salga that started in Johannesburg on Wednesday.

The talks were set to resume at Midrand’s Gallagher Estate at 2pm.

He said a meeting with Samwu’s national executive committee had been scheduled for Saturday.

“This meeting will discuss Salga’s mandate, as well as the marathon meetings that have been occurring. We will address some of the key issues that directly relate to our demands. We feel that we are making good progress,” Sema said.

Late on Thursday, amid countrywide protest marches, Samwu announced it was close to ending the strike.

“We are almost on the verge [of ending this strike]. We have been able to find each other on contentious issues,” Samwu Gauteng secretary Vincent Vena told a media briefing in Johannesburg.

It wanted this to apply to higher-ranking officials’ salaries too as Samwu charged they were overpaid and awarding themselves perks. — Sapa