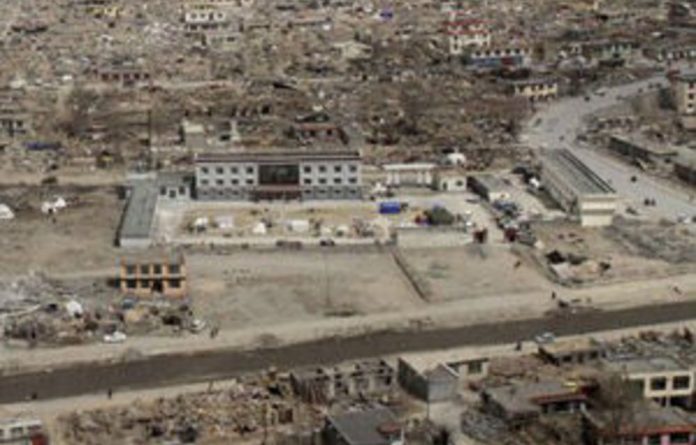 President Hu Jintao flew to China’s remote and ruined Yushu county to speed relief distribution on Sunday, as Tibetan monks prayed over victims of an earthquake in the northwest that killed at least 1,706 people.

“Saving life remains the first priority. We treasure every life and at the same time we should ensure victims regain a normal life,” Hu told Phoenix TV before visiting a classroom at a local orphanage.

Tibetan spiritual leader the Dalai Lama on Saturday asked Beijing if he could also visit the site to comfort victims.

The official Xinhua news agency reported earlier on Sunday a 68-year-old man had been rescued alive after 100 hours under the rubble but later withdrew the report. It gave no further details.

Hundreds of military trucks, joined by convoys organised by private aid groups, rolled across the 1 000km from the provincial capital to Gyegu, the Yushu county seat where survivors are increasingly desperate for food and shelter.

They queued for food and fuel, clutching bowls or jerry cans.

In Tuanjie village, outside Gyegu, relief workers distributed blankets at the local monastery but said the high altitude is limiting their ability to fly in food.

“We have never had such a big earthquake before so this is completely unexpected for us and we were not prepared,” said He Zhanlu, team leader for aid distribution in the village. “To add to this, aid from all over the country is coming to us now, so traffic conditions on the road is a logistical problem.”

Some non-government organisations have set up distribution centres outside Gyegu to stop looting and fights over food.

“The security situation is calm. So far there are no big criminal incidents,” Ministry of Public Security spokesperson Wu Heping said, warning against fraudulent earthquake charities.

Hundreds cremated
Tibetan monks have congregated from across the Tibetan plateau to help with relief work and to chant over the dead in the devoutly Buddhist region. They estimated they cremated more than 1 000 bodies on a grassy hillside outside Gyegu on Saturday.

Family members brought more wrapped bodies to hundreds of chanting monks on Sunday. The sheer number has forced them to choose cremation over traditional “sky burials”, in which vultures eat the dead.

While China is unlikely to allow a visit by the Dalai Lama, who fled to India in 1959 after a failed uprising, Beijing appears to be slowly recognising the importance of the Buddhist response in this traditional Tibetan area.

Xinhua said the Beijing-backed Panchen Lama sent a donation and message to Tibetans in Yushu via the United Front, an arm of the Communist Party designed to reach out to non-Communists and other ethnic groups.

Premier Wen Jiabao visited a monastery on Friday and thanked monks for their work, foreign journalists in Yushu said, although state media did not report the visit.

Scavenging
Residents and rescue teams picked through the wreckage of collapsed homes, looking for the dead or for bits and pieces to make life in tents or in the cold outdoors a little easier.

“Our first problem is that there aren’t enough tents, and too many of the ones that are arriving are going to people with influence,” said Dongzhu, an ethnic Tibetan who was scouring the remnants of his collapsed home on Saturday.

The harsh conditions on the Tibetan plateau — Gyegu is about 4 000m above sea level — mean reconstruction is urgent. Temperatures drop below freezing at night and strong winds blow constantly.

“When winter comes here, it’s very, very cold and windy too,” Dongzhu said. “I can’t imagine what it would be like to be living in a little tent when winter comes.”

Donations from other provinces have reached 225-million yuan ($32,97-million), Zou Ming, an official at the Ministry of Civil Affairs, said on Sunday.

“At the moment, the supplies that have been sent are enough to ensure people there have shelter, food and water. Of course, there are shortages, and a lot of supplies are still in transit,” he told reporters.

Tibetan students in regional cities have volunteered to translate at hospitals, where patients are unable to communicate with Chinese doctors, Xinhua said.

Dongzhu’s family was sleeping outdoors in their courtyard, surrounded by Buddhist statues and other recovered items.

“There’s absolutely no way that the families around here could afford to pay for new homes themselves, and after this we will want quake-resistant homes,” said Dongzhu, a retired local official in his sixties.