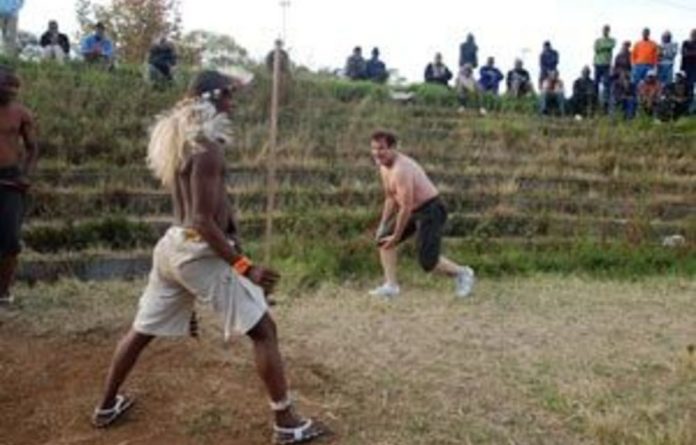 At the end of episode one of Guy Spiller’s serialised documentary about South African art there’s a satisfying helicopter ride over Johannesburg. We fly over the mining activities in Jo’burg south where the dumps that once dominated our landscape (and our consciousness) are being carted away. Here the graders and tip trucks look like children’s toys as they move about purposefully.

The mine dump is broken by a cliff, above which sits the disused Top Star drive-in theatre, with all its facilities still intact. The white, angular movie screen looks ready for a night’s entertainment. But the ancient tarmac is cracked in places and protruding tufts of grass make it look like the head of a wounded old man.

The purpose of the documentary, called A Country Imagined, is to marry the medium of television — with its infinite possibilities — to the more static mediums of the visual arts. By travelling across Gauteng, and looking at the familiar landscape, we are encouraged to compare what we know with the visions artists have had of our communal life.

To guide us the filmmakers have enlisted musician and anthropologist Johnny Clegg, who provides an affable, dependable presence, exuding knowledge without being too forceful. I swear it is the first time I have enjoyed anything about Clegg — and now, I can honestly say, I can see why he is so well liked.

Let’s go back to the beginning, though. The series kicks off 110km from Johannesburg at the mysterious world heritage site, the Vredefort Dome. We are told that “a singular catastrophic event once transformed the area in an instant, giving us the biggest visible impact crater in the world”.

A intervention by Marcus Neustetter follows, in which a group of people witness the artist trying to recreate the moment of meteoric force. But Neustetter’s work seems to play against the violence of the impact that happened two billion years ago — at night, laser beams, colourful objects and fabric are used to evoke the feeling of something extraterrestrial gently engaging with the Earth.

Moments later we are with land artist Willem Boshoff, who has placed finely polished giant granite rocks randomly in the crater upon which he has etched typography in many styles and languages. We are encouraged to ponder how the force of nature brought about a chain of events that led to the emergence of human life in all its diversity.

There is ancient rock art in the centre of the dome and Clegg tells us with authority that the creatures represented, probably drawn by a shaman, communicate the “inner landscape of a people who lived here around 5 000 years ago”. The animals depict a shamanic dream “placed so positive energy could be shared and spread throughout the community”.

Later in this episode we are shown photographs from a site-specific installation by conceptual artist Clive van den Berg. In 1995 Van den Berg used the mine dumps of Johannesburg as a mammoth canvass upon which he burned fires at regular intervals in the shape of a human head. The giant “fire drawings”, according to Clegg’s narration, were visible from the highways of Johannesburg and they posed the question: “Who created the mine dumps? How did they get there and what do they represent?”

Van den Berg’s Mine Dump Series was a late 20th-century reworking of the shaman’s dream, etched into the Vredefort crater rocks. Somehow, and in an equally naive manner, he was questioning whether there is something beyond the human presence that is able to give and take away. This was seen in the context of the massive undertaking by mining houses, at that time, to reduce the iconic mine dumps so that they could be further refined for gold.

Johannesburg itself is a place of infinite creation and destruction. Spiller’s detailed exploration of the way we make our art includes pivotal moments when literature endeavoured to describe our complex experience of the changing landscape. Writer Ivan Vladislavic puts it like this: “We do not wait for time or the elements to weather us. We change the scenery ourselves to suit our mood. Nature is for other people, in other places.”

David Goldblatt, Santu Mofokeng and Jo Ractliffe are some of the other artists who have attempted to describe the impact that industry and progress have had on the ordinary citizen.

And there is a short section about the impact that small-town life has had on South Africa’s emerging rock stars.

The episode culminates in a journey Clegg and company take to the supposedly dehumanising environment of the migrant hostels on the East Rand. Predictably, Clegg involves himself in a traditional Zulu dance competition where we witness an Africa not exotic or cruel.

All we see, really, is a Zulu boy and a Jewish boy dancing together on a hill.