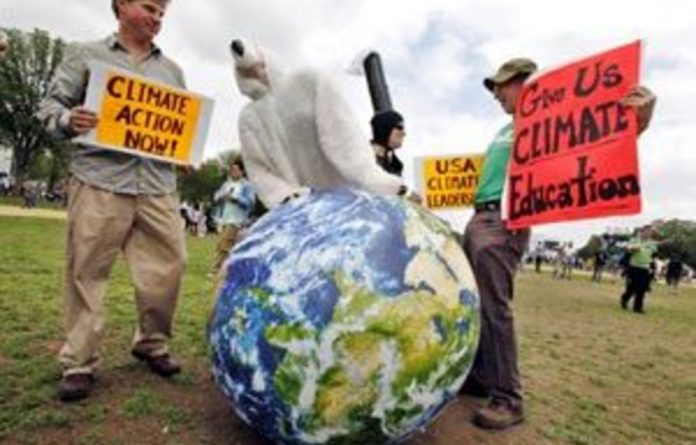 A group of developing countries, among the world’s fastest-growing carbon emitters, said on Sunday a legally binding global agreement to limit climate change needed to be completed by 2011 at the latest.

Environment ministers of the so-called BASIC bloc — Brazil, South Africa, India and China — met in Cape Town to look at how to fast-track such a deal to curb global warming.

“Ministers felt that a legally binding outcome should be concluded at Cancun, Mexico in 2010, or at the latest in South Africa by 2011,” the ministers said in a joint statement, referring to United Nations climate talks scheduled for the end of they year.

Jairam Ramesh, India’s Environment and Forestry Minister, told reporters: “Right now it looks as if we will have to come back to Cape Town in 2011. There is no breakthrough in sight … we have a long way to go.”

The Kyoto Protocol, which the United States did not ratify, binds about 40 developed nations to cutting emissions by 2008 to 12. UN climate meetings have failed to reach a legally binding agreement on what happens post-2012.

More than 100 countries have backed a non-binding accord, agreed in Copenhagen last year, to limit global warming to below 2 degrees Celsius above pre-industrial times, but it did not spell out how this should be achieved. It included a goal of $100-billion in aid for developing nations from 2020.

The United States supports the Copenhagen Accord but many emerging economies do not want it to supplant the 1992 UN Climate Convention, which more clearly spells out that rich nations have to take the lead in cutting emissions and combating climate change.

‘Fast-start funding’
The BASIC ministers on Sunday proposed to use $10-billion of “fast-start funding” this year to test and demonstrate ways of adapting to and mitigating climate change.

They said the world could not wait indefinitely for the US, the second-biggest carbon emitter after China, to pass domestic legislation needed to conclude negotiations.

A bipartisan working group on Saturday delayed a compromise climate change bill, a top priority of President Barack Obama that has been closely watched by other nations sceptical of US commitment to fight global warming.

“Of course there is no way to fight climate change without the United States and we believe that we can be able to build an agreement that [would enable] the United States to come on board,” Izabella Teixeira, Brazil’s Environment Minister, told journalists.

Her South Africa counterpart, Buyelwa Sonjica, said if the US did not soon pass necessary domestic climate laws, “that would impact on vulnerable countries, making them remain at risk”.

Emissions from industrial countries fell by 2,2% in 2008 as the world fell into recession, the sharpest fall since the break-up of the Soviet Union. Experts say there is no basis for believing the decline was the result of a coordinated effort to tackle emissions.

Industrialised nations have been unwilling to take on new commitments beyond 2012 unless major emerging nations, such as India and China, also sign up. — Reuters