Booming China on show to world at Shanghai Expo 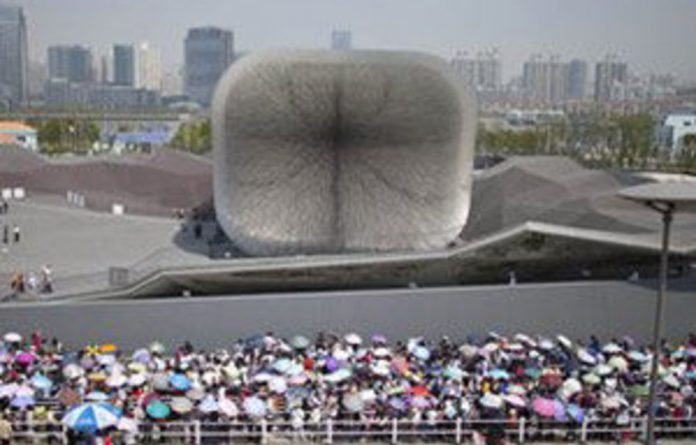 Shanghai opened its multibillion-dollar World Expo to the public on Saturday, showcasing China’s booming economy and resurgent national pride, as well as the latest green technology from 189 countries.

Visitors reported long lines, and occasional angry exchanges about queue-jumping, to get into some exhibitions in the enormous Expo site, which is 20 times bigger than the last World Expo held in Spain’s Zaragoza in 2008.

Separate tickets for the most popular pavilions, such as China’s, were in short supply.

“This is a great event as it’s a good forum to communicate with the world,” said Shanghai resident Lao Chen. “But it’s very disorganised. There are just too many people in China.”

Another visitor, a retiree from Shanghai who gave his family name as Zhao, said he was upset not to be able to get into the hulking China pavilion, one of the few that will not be demolished when the six-month extravaganza ends on October 31.

“I will never be able to see it. I can only look at it from the outside, and what’s the point of that?” he said, bitterly.

But others said they were enjoying themselves, adding they thought it was money well spent by the Chinese government.

“It’s not a matter of money. It’s our pride that China can host the Expo,” said 30-year-old Ning Lifang, a bank clerk from the nearby city of Suzhou.

China says it has spent $4,2-billion — double what it spent at the 2008 Beijing Olympics — to host the world’s largest exhibition. It is the most expensive Expo to date and local media have reported the true cost, including upgrades to the city’s infrastructure, is closer to $58-billion.

Greek determination
Underscoring the political capital China is attaching to the Expo, an event that has somewhat faded from the world’s view in recent years, a host of foreign leaders attended its opening, most notably French President Nicolas Sarkozy and European Commission President José Manuel Barroso.

Even Greece, currently working on a bail-out deal with the EU and International Monetary Fund to save it from default on its debts, sent a top official — a testament to the importance of good ties with China, which Athens hopes can be an increasing source of tourism and shipping revenue as well as investment.

Greece had to cut the budget for its pavilion by 40% on account of its debt woes, skimping on everything from design to the brochures on offer, but it was determined to be there, said Deputy Prime Minister Theodoros Pangalos.

“Greece participating in the Shanghai Expo was a promise to China and the people of Shanghai, which we have fulfilled today. We could not cancel on this international event,” he said.

Cosmopolitan Shanghai expects 70-million visitors will attend the Expo — an average of nearly 400 000 per day — though just 5% will be foreigners.

“Despite the onset of the global financial crisis as we were preparing for the Expo, we kept our promises and made vigorous efforts towards the goal of making Expo 2010 in Shanghai a successful, splendid and unforgettable event,” Hu added.

Tight security
The Expo has been accompanied by heavy security, with X-ray checks for bags at subway stations, a very obvious police presence, and bomb-recognition pamphlets distributed to offices in the Pudong financial district.

Many countries have gone to extravagant lengths, spending huge sums to boost their image in China. Attendees include not only large countries like France, Russia and the United States, but also Turkmenistan, Oman, Costa Rica and many others.

Saudi Arabia has spent $146-million on its spaceship-shaped pavilion, which features date palms, while India plans to fly a cast of Bollywood stars to the site to perform.

Still, despite the hoopla and spectacle the event promises, the run-up to the Expo has not been without controversy.

Rights groups have complained about forced evictions of residents to make way for the Expo, lack of compensation and violence visited on those who complained.

Some national pavilions are also still not ready.