Iraq rocked by wave of attacks 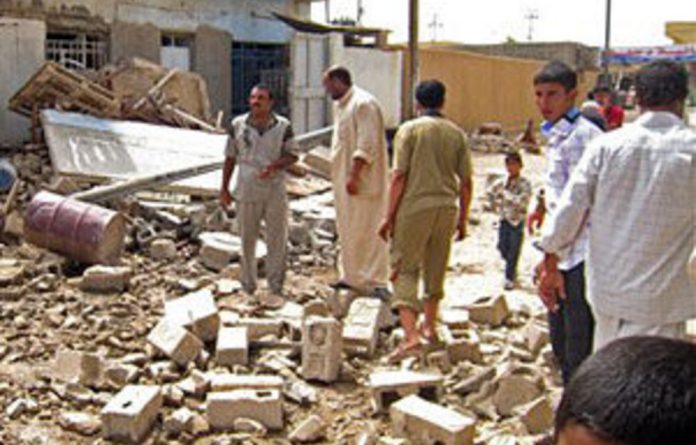 Suicide bombers, car bombs and gunmen using silencers killed at least 55 people in Iraq on Monday after conducting a wave of assaults against marketplaces, a factory car park and police and army checkpoints.

The attacks in different parts of Baghdad and in towns to the south, north and west of the capital appeared aimed at showing Iraqis that al-Qaeda in Iraq was still a potent force despite suffering battlefield defeats in recent weeks.

They also occurred as Iraq remained gripped by political uncertainty two months after an inconclusive election that pitted a cross-sectarian bloc backed by minority Sunnis against the main Shi’ite-led political coalitions.

In the bloodiest incident, two suicide car bombers drove into the entrance of a fabrics factory as workers were ending a shift in the town of Hilla, about 60km south of Baghdad, a regional office of the national media centre said.

Earlier, a suicide bomber wearing a vest laden with explosives and another driving a car killed at least 13 people and wounded 40 in a marketplace in al-Suwayra, 50km south-east of Baghdad, said Majid Askar, an official with the Wasit provincial council.

Meanwhile, at dawn in Baghdad, gunmen equipped with silencers killed at least seven Iraqi soldiers and policemen when they attacked six checkpoints, while bombs planted at three others wounded several more, an Interior Ministry source said.

All the checkpoints were attacked at about the same time, the source said, asking not to be identified.

“This was a message to us that they can attack us in different parts of the city at the same time because they have cells everywhere,” he said.

Show of force
A series of other attacks in the western province of Anbar, the volatile northern city of Mosul, the northern outskirts of Baghdad and elsewhere took the death toll from the day of bloodshed to at least 55, with up to 200 wounded.

The attacks were seen as a show of force from a weakened yet still dangerous Sunni Islamist insurgency after government forces dealt a series of blows to al-Qaeda’s local network in recent weeks.

Overall violence in Iraq has fallen sharply since the height of sectarian warfare in 2006/07, but the March 7 election that produced no clear winner has fuelled tensions.

Iraq’s main Shi’ite-led coalitions, however, have agreed to form an alliance that could deprive Allawi of a chance to try to form the next government, potentially angering Sunnis. — Reuters