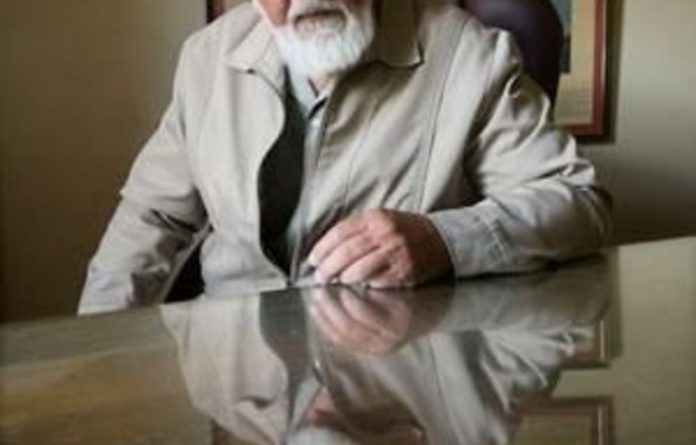 A grisly picture of the killing of right-wing leader Eugene Terre’Blanche was painted at a bail hearing on Monday.

The Ventersdorp Magistrate’s Court heard he was hacked and beaten with a panga and iron rod 28 times while sleeping — and nearly dismembered.

Chris Mahlangu (27) listened impassively as investigating officer Tsietsi Mano testified how the brutality of the Easter weekend murder had disturbed him.

“He [Terre’Blanche] was sleeping, so he never saw it coming,” said Mano, to murmurs of agreement from Terre’Blanche’s elderly brother, Andries, who sat with hunched shoulders in the front row of the public gallery.

Bitter pill
“The brutality was a bitter pill to swallow — he was totally unrecognisable.”

The court heard how Mahlangu, who shielded his face from photographers with his black Nike track-suit top, bragged about the killing afterwards.

State prosecutor George Baloyi read out a preliminary summary of the substantial facts of the case.

This outlined how Mahlangu and his co-accused, a 15-year-old minor, broke into Terre’Blanche’s farmhouse outside Ventersdorp, hacked him to death, pulled his pants down and stole his cellphone.

“They struck him several times in his face, head and body with the iron rod and a panga.”

After the murder, “they met three people and accused number one [Mahlangu] told them that he is now their boss because they have killed Mr Terre’Blanche”, said Baloyi.

Mano testified that Mahlangu confessed to the murder several times.

“The evidence against the accused is overwhelming.”

Not only did Mahlangu brag about killing Terre’Blanche to several farm workers, but he also pointed out the murder scene to police, the blood on his clothes matched that of Terre’Blanche.

Mahlangu also told Mano he would confess to the murder.

This led Mano to take him to a magistrate in Klerksdorp where he started making a confession, but was interrupted by his lawyer, Puna Moroko, who burst into the magistrate’s office.

Mano read out the report written by the magistrate, Sophia le Roux, who noted that Mahlangu seemed “calm and very at ease with himself”.

Also, the report said he did not have any obvious injuries to the body.

Moroko prevented the magistrate from finishing the confession, saying Mahlangu’s family had hired him.

Moroko told the court his client had acted in self defence, a statement to which Mano later replied: “Now I’m lost.”

‘Not a flight risk’
Moroko argued for his release on bail, saying Mahlangu had two minor children that needed him.

He assured Magistrate Makgaolo Foso that his client — who he said never attended school — was not a flight risk.

The lawyer denied a statement by Mahlangu’s uncle that his client was a Zimbabwean.

Moroko, however, acknowledged that Mahlangu did not own an identity document or a passport.

Mano testified that the police tried to find Mahlangu’s name on South Africa’s birth register at the department of home affairs, but could not find any trace of him.

Mano said Mahlangu’s uncle told the police that he was indeed Zimbabwean and that his real surname was Rhangani.

The argument about his identity and date of birth — which Mahlangu said was September 24 1982 — at one stage saw the magistrate ask him to stand up so that he could guess his age.

Either way, Mano insisted that he should not get bail, partly because of the confusion around his identity.

“His origin, his citizenship is under doubt,” said Mano.

“Even if bail was set with conditions, I am of the opinion that the accused will never stand trial — he is aware of the seriousness of the crime.

“Besides that, the security of the country itself was only saved by the president [Jacob Zuma] who went on national TV to call for calm.”

Mahlangu stared straight at Mano with folded arms as he testified against the bail application.

The crime, especially because it was a farm attack, was considered by the police to be a “priority crime”, Mano said.

The state presented photographs of the murder scene which Mano had to describe to the court room.

Grisly photographs
“The deceased is lying on his back on the bed, with blood all over his face and on the bed and headboard,” said Mano, who reached for a glass of water after going through several pictures.

He told the court he struggled to get an honest answer from the two accused as to why they pulled down Terre’Blanche’s pants after the murder.

“Accused number two [the minor] said his [Mahlangu’s] intention was to dismember — but thereafter he left it,” said Mano.

Moroko told reporters outside court there was no truth in this.

He insisted that Mahlangu was a South African citizen but said he could not prove it, and neither could the state prove the contrary.

The bail hearing was set to continue on May 19, when Moroko would start cross-examining Mano.

The state was expected to also call Mahlangu’s uncle as a witness.

The 15-year-old youth appeared for a quick remand on Monday morning.

His lawyer, Zola Majavu, said the trial date had been set for September, while the next appearance would be on June 10, when the state would hand over an indictment sheet.

A crimen injuria charge, related to the pulling down of Terre’Blanche’s pants, was set aside for the bail hearing, “pending outstanding investigations”, said Baloyi. – Sapa