Bafana: We don’t care about money 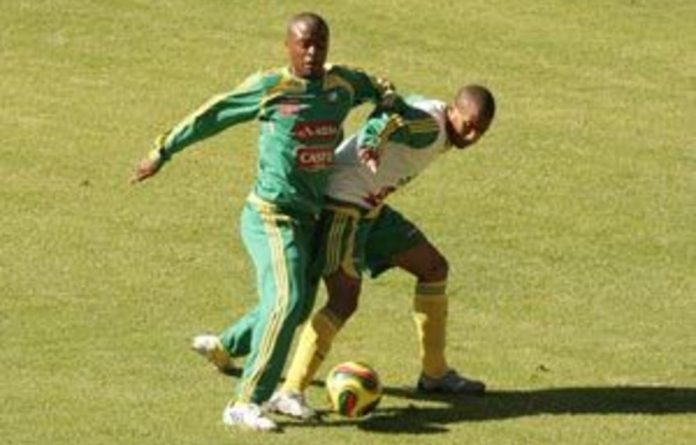 Playing in the World Cup finals is not about money or extra financial incentives and Bafana Bafana will be playing for pride and their country when they open the global showpiece against Mexico at Soccer City on June 11.

That was the promise to the country from two of Bafana’s overseas based full backs, Tsepo Masilela and Bryce Moon, on Wednesday.

Said Moon who plays for top Greek club POAK: “Playing in the World Cup is not about making money, it is about a chance in a lifetime to represent one’s country on home soil in the biggest soccer event on the planet and I want to be part of it.”

Israel-based left back Masilela, agreed and said: “For me playing in the World Cup has been my biggest dream and I do not care about bonuses.

“My only aim at the moment is making sure I make the cut when the coach [Carlos Alberto Parreira] names his final 23 players for the World Cup.

“I want to fulfil my dream.”

Parreria has a squad of 30 at present and will wield his axe in terms of Fifa rules by June 1 when he trims his squad by cutting seven of the current squad.

Both players conceded they have a fight on their hands getting their places back after the local based players have been with Parreira through three training camps in Durban, Brazil and Germany, since January, and have started to mould as a unit after their back-to-back wins over Jamaica (2-0) and Thailand (4-0).

“No player in the squad is guaranteed a place in the final World Cup squad. That is why I am here to fight for my place.

“I know there is tough competition but I am up for it,” said Masilela.

Moon was raving about the atmosphere in Johannesburg: “You see the flags and side mirrors on the cars, and it really is fantastic knowing the country is behind us.

“The supporters have been fantastic and it gives us huge confidence and for me as a player it is an amazing feeling.”

When asked how far Bafana could go, Moon replied: “If you come into the tournament not wanting to play in the final, then you should not be here.”

Both defenders believe the match against Mexico would be the crunch game. “We have to beat Mexico and build up a winning momentum to drive us into the next round and get the country excited,” said Masilela.

Both played for their respective clubs in the recent European Champions League and said the experience had done them a world of good.

Said Masilela: “Bayern Munich who are in the final on Saturday, were in our group. It was a tremendous experience playing in the best club competition in Europe and I learnt a lot.”

Moon added: “The Champions League is a big stage and helped me by building up experience and confidence of playing against some of the best players in the world. I will bring this experience to Bafana in the World Cup.” — Sapa