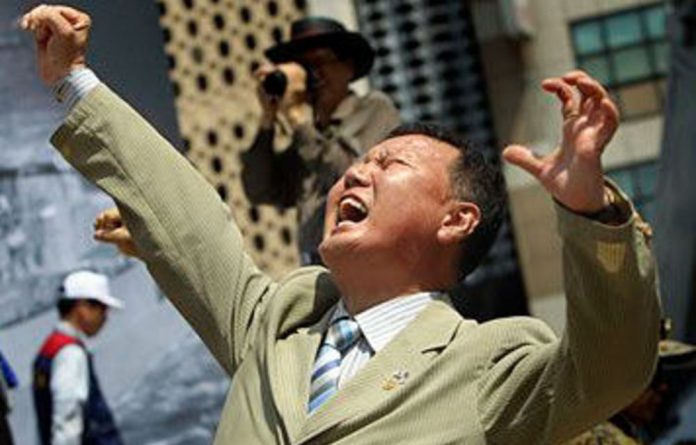 North Korea vowed on Thursday to attack any South Korean ships that violate their disputed border, and Seoul’s navy staged its own show of strength amid continuing high tension over the sinking of a warship.

Pyongyang’s military general staff also scrapped a pact that guards against accidental naval clashes at the flashpoint border, and repeated threats to shut down a joint business project.

Elsewhere in the Yellow Sea, South Korea’s navy staged an anti-submarine exercise, its first since Seoul publicly accused Pyongyang of torpedoing one of its warships on March 26 with the loss of 46 lives.

In Seoul, an estimated 10 000 protesters shouted “Kill our enemy!” and whacked images of the North’s leader Kim Jong-Il with wooden bars.

Investigators from five countries said last week they found overwhelming evidence that a torpedo attack by a North Korean submarine sank the Cheonan near the border.

The South has announced a series of reprisals including a halt to trade. The North, which denies involvement, has responded with angry rhetoric and an announcement that it is cutting all ties with its neighbour.

The border was the scene of deadly clashes in 1999 and 2002 and of a firefight in November last year. The South’s military believes the Cheonan was sunk in revenge for the firefight.

The general staff said it was also scrapping military safety guarantees for South Koreans crossing the land border, and would consider a complete block on access to the Kaesong joint industrial estate in its territory.

It repeated a threat to attack loudspeakers if Seoul goes ahead with its plan to resume cross-border propaganda broadcasts as part of reprisals.

About 42 000 North Koreans work in 110 South Korean factories at Kaesong, which was developed as a symbol of reconciliation.

“We are watching whether North Korea will take action to cripple the operations of the Kaesong estate, or will close it,” said Unification Ministry spokesperson Lee Jong-Joo.

Officials quoted by Yonhap news agency said South Korea’s military and the 28 500 US troops in the South had raised their alert level and stepped up aerial surveillance of the North.

Diplomatic drive
South Korea and the US have launched a diplomatic drive to punish the North with United Nations Security Council sanctions. China, wielding veto power in the council, has so far held back from condemning its ally, the North.

The North says the South faked evidence of its involvement in the sinking to fuel confrontation, and threatens “all-out war” against any punitive moves.

US Secretary of State Hillary Clinton visited Seoul on Wednesday in a show of support and said the world had a duty to respond to the North’s attack. A US diplomat travelling with her told reporters Beijing would carefully move closer to Seoul’s position. A visit on Friday to South Korea by Chinese Premier Wen Jiabao could mark the start of the change, the official said.

Russia, which also has a Security Council veto, said it would send experts to Seoul to study the findings of the investigation into the sinking.

Moscow said it would not support efforts to punish the North until it is fully convinced of its guilt.

“We need to receive 100% proof of North Korea’s role in the sinking of the corvette,” said Foreign Ministry spokesperson Igor Lyakin-Frolov.

“Our specialists are currently studying the materials of the investigation. We need to draw our own conclusions about what happened.”

Analysts said a full-scale war was unlikely but clashes cannot be ruled out.

The two Koreas appear to be on a collision course and to have “neither the will nor a strategy to exit from this extremely difficult phase”, said Yang Moo-Jin, of Seoul’s University of North Korean Studies.

Only the United States and China could end the crisis, he said. — AFP