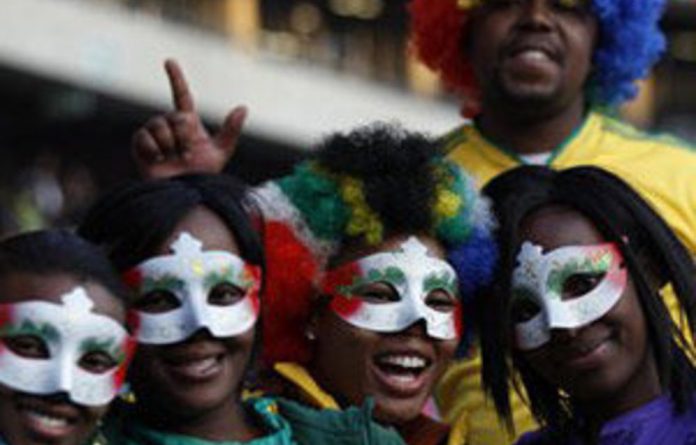 Not all of us look good in Bafana Bafana jerseys. The fat are not flattered by their body-hugging contours — and God knows we are an adipose nation. The pale are done no favours by their acid-yellow glow; sallow-toned whites take on a jaundiced hue in the light reflected off their polyester chests.

And yet, each Friday in offices and supermarkets, in airports and police stations and hospitals, there is a trooping of the colour in extraordinary, unambiguous ubiquity. We know that proceeds from the sale of jerseys go to some obscure businessman in Bryanston whose claim on the royalties is a mystery, or to smugglers of fakes with ties to organised crime. We also know that even an improved Bafana are unlikely to set the world on fire in the coming weeks. But it doesn’t matter, because football Friday has precious little to do with football.

Bafana jerseys are not a message we send to the national team; they are a message we send to one another, louder and clearer than skin colour or language. At one level they say: “We are together in this. You’re on my team.” At another, subtly but crucially different, they say: “I need you to see that I believe we are together in this.” It is precisely in insisting on our solidarity that we acknowledge that you can build a bridge only between places that are divided.

This is not patriotism as the last refuge of the scoundrel; it is a complicated, very South African affirmation of our persistent, impossible and yet essential effort to find our way to a less anxious, awkward way of inhabiting this country.

Race is far and away the most obvious force at play here, but it is not the only one, and it may not even be the most important. Because this is the football World Cup, not a Bulls game in Soweto, or a championship in a more minor sport, it has become an opportunity to reimagine our place in the world.
It is in many ways an imaginary country that we are cheering for — united, well-governed, competitive. And it is here that the true promise of the coming month lies. To see it, we have to perform a complicated exercise that involves dancing and head-scratching at the same time. We know how to get down to a complex rhythm and it begins by acknowledging just how much is wrong with the World Cup and our decision to host it.

We have overspent to a grotesque and completely unnecessary degree on stadiums, most of which will be a drain on municipal finances for years.

We have surrendered national sovereignty to a gang of old, white men in Geneva who conceive of South Africa principally as a soundstage on which a month-long commercial for their sponsors is to be filmed.

And we have been put into the hands of the craven power-mongers who run local football with a pot of cash fatter than the calabash at Soccer City.

Frankly, it is an extraordinary insult to all South Africans, but to the poor most of all, that a diktat from Sepp Blatter can cause gleaming sports palaces to rise from the earth, highways to be rebuilt and high-speed trains to run on time.

It tells us that the right combination of government will, government cash and private sector expertise can deliver infrastructure of boggling sophistication rapidly and efficiently. We can sheathe the Green Point stadium in gorgeous translucent mesh, but we won’t build shelters around toilets. Apparently lack of money, or capacity, isn’t the obstacle, we’ve been told. Alternatively, perhaps we could spare enough for one big push, and we chose to push football.

So what do we do with this certain knowledge humming in one ear and the drone of vuvuzelas rising in the other?

The simple solution is to enjoy the party and to suspend critical thought until the inevitable August hangover. It is an attractive idea in many ways, but it requires powers of self-deception that are beyond many of us — and frankly, it is unpatriotic.

The alternative is that we employ our national genius for paradox to make something much more powerful of this moment. That is to say, we follow the example of the state in using the tournament as a critical test of our capacity — not to build roads and airports, but to flex our democratic muscles.

So we take the local organising committee to court to find out who it is doing business with. We interrogate the fiscal and social impacts of the tournament even as we are transported by sublime ­athleticism, or thrilled by an opening to the world that mutes the xenophobic chorus.

In short, we make our engagement with all that is wonderful and awful about the tournament a monument to South Africa that is more lasting than any stadium — and we yell ourselves hoarse for the country that we are trying to dream into being.