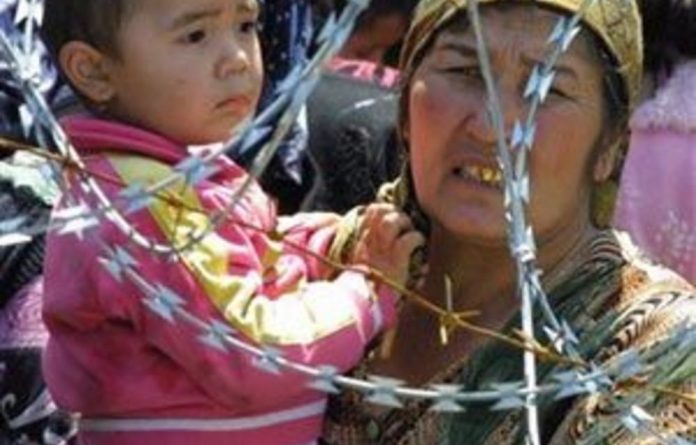 The humanitarian crisis for tens of thousands of refugees who fled ethnic fighting in Kyrgyzstan is intensifying, officials warned on Tuesday, even as signs emerged of a slackening of the unrest.

Uzbekistan has struggled to cope with the flood of ethnic Uzbek refugees who crossed the border to escape five bloody days of clashes with ethnic Kyrgyz that have left at least 170 people dead and almost 1 800 wounded.

The fighting has turned much of the southern cities of Osh and Jalalabad into smoking wrecks and raised fears over the future stability of the country of 5,3-million where Uzbeks make up 14% of the population.

With estimates of up to 100 000 refugees already inside Uzbekistan after fleeing the southern cities, the Central Asian state said the border would now be shut, leaving thousands more would-be refugees marooned outside.

The ambassadors of the UN Security Council called for a return of the rule of law to Kyrgyzstan while Russia warned that the “intolerable” situation in the country risked spinning out of control.

“The humanitarian situation in the conflict zone is worsening. There are many refugees in need of help and attention,” said Kazakh diplomat Zhanibek Karibzhanov, the special envoy of the transatlantic OSCE security group.

“One of the main tasks in the south of Kyrgyzstan is to stabilise the situation and not allow the conflict to spread into other territories,” he told reporters in the capital, Bishkek.

There was sporadic gunfire in Osh during the night and tension remained high in the city on Tuesday. But only a few gunshots were heard as a prisoner exchange took place, in contrast to the steady firing of recent days.

Agence France-Presse (AFP) journalists in Osh watched the exchange of captives from the fighting as ethnic Kyrgyz and Uzbeks approached each other across the empty no-man’s land separating the two ethnic groups in the city.

As the exchanges took place, men in the Uzbek enclave were busy felling trees and erecting new barricades of logs, cargo containers and wrecked vehicles in the streets to protect their homes and shops.

Local Uzbek residents said they had seen fresh corpses on streets just outside the protected perimeter of their neighbourhood but said it was still too dangerous for them to move into the area to retrieve the bodies.

In one of the clearest signs of the ethnic nature of the violence, homes in central Osh painted with the letters KG on their sides, stand untouched. Between them, burnt-out husks are all that remain of what were once Uzbek homes.

AFP reporters said there was no sign of Kyrgyz military, police or any other representatives of the national government in the ethnic Uzbek sectors of Osh.

The Osh regional police chief, however, said the violence in and around the city seemed to have receded overnight. “There is a slow but growing stabilisation in the south of Kyrgyzstan,” Omurbek Suvanaliyev said.

The governor of the Jalalabad region, Bektur Asanov, said the situation had stabilised there, too, following several days of carnage.

According to the latest toll from the Kyrgyz Health Ministry, 170 people have been killed in the violence in Osh and Jalalabad and 1 762 wounded.

Call for calm
Amid horror over the humanitarian situation, the UN Security Council’s 15 ambassadors urged “calm, a return of rule of law and order and a peaceful resolution of differences”, according to Mexican Ambassador Claude Heller.

The International Committee of the Red Cross (ICRC) head of operations for Central Asia and Eastern Europe Pascale Meige Wagner warned “we’re far from seeing the end of this crisis”.

“We hear extremely worrying stories about people targeted — there is a will to harm and kill that is going in Kyrgyzstan.”

UN High Commissioner for Human Rights Navi Pillay urged Uzbekistan as well as Tajikistan to keep its borders open “to anyone, irrespective of age or gender, who is in need of sanctuary”, said her office in a statement.

Russian President Dmitry Medvedev, speaking after an urgent meeting of a Russia-led regional security body, called the situation in Kyrgyzstan “intolerable” and said it was necessary that it be brought under control.

Both the United States and Russia maintain vital military facilities in Kyrgyzstan, an ex-Soviet republic of pivotal strategic importance in the volatile Central Asia region, notably to Nato operations in Afghanistan.

Another senior Russian official, Nikolai Patrushev, said the Russia-led Collective Security Treaty Organisation (CSTO), a group of ex-Soviet republics led by Russia, “did not rule out” any means to stabilise Kyrgyzstan.

Plans for some kind of military intervention were prepared at an emergency CSTO meeting, Patrushev said, and could be implemented at any time following approval by the heads of state of the group’s members. — AFP

How a lack of democracy fuels violent extremism in Africa