Just one of the boys 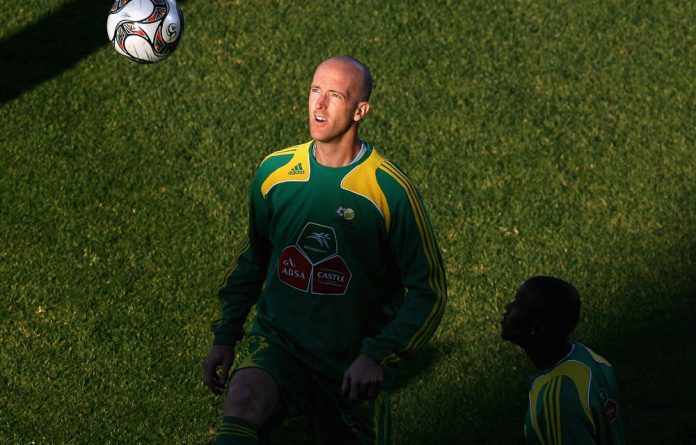 “Matthew Booth!” shout two boys as they spot him strolling though the South Africa team hotel in Johannesburg. The defender has become a household name in the buildup to the World Cup and, at 2,01m, the 33-year-old is not difficult to spot. Nicknamed the “giraffe” by his teammates, a tag he admits to with an awkward chuckle, as he poses to have his photograph taken among the greenery of the hotel, there is something serene about him, blinking slowly in the sunlight, his head pushing up towards the treetops.

But a recent twist left Booth the No 1 focal point of the international press, not for his height, but because of his colour. Several British media outlets dubbed him South Africa’s “White Knight”. The crass headlines made him cringe. He may be the only white player in the national squad, but Booth views himself first and foremost as a member of the team, not an individual on a race-conscious crusade.

“A lot of the foreign media came over with a particular agenda to portray me as someone unique,” Booth says, “a unifier. I think it was an Italian newspaper that said I was in ‘the struggle’, an activist against apartheid. I mean I was 12 years old when apartheid ended!” He throws up his hands at the idiocy.

“All these things are rather embarrassing,” Booth says, shaking his head. “But I understood that I had to come in and be more careful, try to break the perception that I was the only white footballer in South Africa.”

It all started last year when South Africa hosted the Confederations Cup and an accusation of racism began circulating. Those unfamiliar with South African football culture misheard the local supporters shouting “Boooooth!” and instead believed him to be a victim of racist booing from a predominantly black crowd.

“After every game I spent literally an hour-and-a-half to two hours talking to every foreign journalist and having to explain the situation. It’s a form of admiration and it’s fantastic to be chosen in that way.” He pauses. “Should I actually have a bad game and they really start booing me, I’d like to think I’d be able to tell the difference.”

The issue of which sport is played by which race in South Africa still dominates many a discussion, but Booth is quick to point out that he is not the only white footballer in the country. “There’s a good presence of white players. At my club [Mamelodi Sundowns, often described as the Chelsea of South Africa’s Premier Soccer League] we’ve got four white players out of a squad of 25.”

Booth’s marriage to Sonia Bonneventia, a former Miss South Africa from Soweto with whom he has two young sons, caught the imagination of a country where mixed race couples are still few and far between. How does that affect their everyday lives?
Booth speaks sagely. “It’s a very complex country. You can’t generalise about South Africa, it would be very dangerous. With my wife here in Johannesburg nobody bats an eyelid when we walk down the street together, but if we were to go into the countryside there would probably be some more serious stares, curiosity. Things don’t change overnight.”

He suddenly stops. “I actually feel a bit uncomfortable talking about it because everyone’s got different opinions about it. For me I was lucky enough to grow up in a family where colour was not discussed. You got a bloody hiding if you mentioned a person as being black. Luckily my wife’s family also didn’t have any issues with us being together. So perhaps we are fortunate. That’s unusual. But I like to think that that’s slowly changing, it’s just not going to happen overnight.”

It is tempting, albeit simplistic, to see the couple as a totemic symbol of South Africa’s future. Booth, though, resists the label. “I hope not!” he laughs. “I think the fact that I’ve been focused on in this way, particularly by the foreign press, is understandable considering our country’s history. But I wouldn’t view myself in that way.”

Within South Africa the foreign press have been viewed as a menace throughout the build-up to the World Cup, exaggerating everything from how safe visitors will be during the tournament to the ability of the nation to deliver an organised sporting event. Booth and his wife have been caught up in the coverage.

Last month the Sun published an article about the couple headlined “Posh and Boks”. The couple were so embarrassed by the crass celebrity image foisted upon them that Sonia posted a response online, highlighting the charity work they do. She has since arranged to take England’s footballers’ wives to her mother’s home in Soweto, to show them a side of South Africa away from the luxury resorts and fashion boutiques.

Booth says he is not political, but he certainly is passionate. Concerned by the way that governing bodies have behaved in the past, he pinpoints a lack of investment in the grassroots game where it is needed most and questions a system that often lacks transparency. As a young footballer he twice brought a legal challenge against his employers, the PSL, joining the fight for a fairer system.

When it comes to the national team, though, Booth is more than happy with the man in charge, Carlos Alberto Parreira. “When we heard he was coming back it certainly put our minds at ease for the simple case that he brought continuity. He has worked in South Africa before. He understands the whole culture of our team, the way the fans react and the media. He’s a wily character, a tactician. Off the field he knows how to deal with different aspects of football. Press, players …” And politicians?

President Jacob Zuma has already boasted that South Africa will win the World Cup. Booth chuckles. “He knows how to keep that kind of pressure off.” In a country with 11 official languages, almost all are represented in the national team says Booth, “except Venda, I think. But the main languages are English and Zulu. I speak only a little Zulu. But they can’t gossip about me because I understand everything they say!”

Video footage of the team before a game, filmed by Booth in the dressing room, shows an amazing sense of togetherness as the players sing in harmony and dance around the room. With such spirit how can South Africa hope to fare in the tournament? Booth grins. “You mean besides winning it? Should we qualify for the next round I feel sorry for anybody who’s going to meet us such is the support we will have. From then anything’s possible.” —