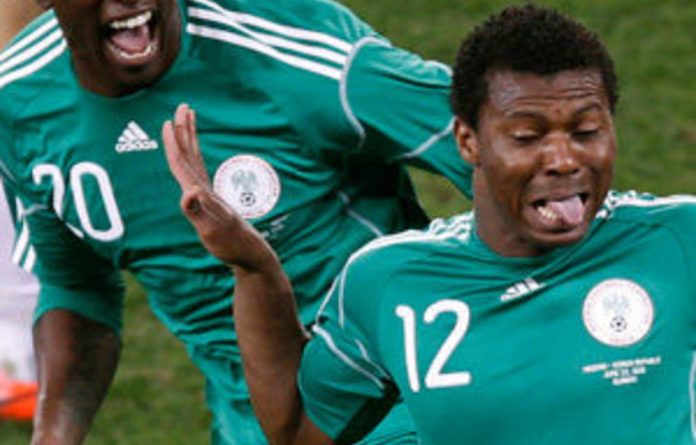 Two-time champions Argentina sealed top spot in Group B at the World Cup on Tuesday by beating Greece 2-0 while South Korea advanced to the last 16 as runners-up despite a 2-2 draw against
Nigeria.

Argentina finally broke down a stubborn Greek defence with late goals from Martin Demechelis and Martin Palermo, finishing on a maximum nine points, compared with four for the Koreans, who
endured a see-saw affair in Durban, and three for Greece.

It was only the second time that South Korea have reached the last 16 and they will take on Uruguay for a place in the quarterfinals.

Argentina will face Mexico, whom they beat in the last 16 four years ago.

The Nigerians were left to rue a host of wasted chances to win the game in Durban and overtake the South Koreans on goal difference.

Nigeria started promisingly with a Kalu Uche goal in the 12th minute after he got in front of his marker and swept a low cross from Chidi Odiah into the net.

The on-song Uche hit the woodwork later in the half, but South Korea hit back in the 38th minute when Lee Jung-Soo shook off his marker to scramble the ball past Vincent Enyeama from a Ki Sung-Yeung free-kick.

Koreans ahead
The Koreans went ahead four minutes after half-time when Park Chu-Young curled a free-kick around the Nigerian defensive wall.

Yakubu Ayegbeni produced the miss of the World Cup when he shot wide from directly in front of the goal, but he regained his composure to coolly convert a penalty on 69 minutes after Chinedu Ogbuke Obasi was tripped.

Another Nigerian chance went begging when Obafemi Martins prodded his shot wide with only the goalkeeper to beat with 10 minutes remaining.

In Polokwane, Argentina started slowly before turning on the style in the second half.

Late goal against Greece
Bayern Munich defender Martin Demichelis smashed in from a goalmouth scramble after 77 minutes to break down an unimaginative Greek side.

The Argentinians then turned the screw, with Lionel Messi smashing against a post.

Messi created Argentina’s second when his shot was palmed away by the Greek goalkeeper and Palermo slotted home the rebound. — AFP