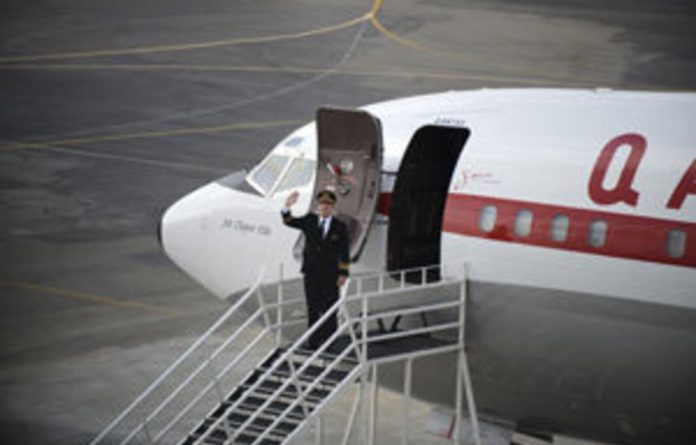 The morning John Travolta jetted into Johannesburg the Fourth Estate had arranged itself in tactical formations on the open viewing deck at Lanseria airport. Camera tripods were propped on plastic tables and chairs shanghaied from the Wiesenhof restaurant next door (the cops were eventually called to intervene and the furniture was returned). Cute blonde journalists stood by in cowboy boots drinking Coca-Cola at 9am, like Lara Logan reporting from the frontlines in Iraq. Not exactly the trenches but close enough. Certainly, the coffee appeared to be bad.

We were all a little hyped up, hoping for … something: an exclusive, a scoop, better coffee. But our chances were slim and we knew it. Celebrity press junkets these days tend to play out a little like children’s reading primers: This is John. See John fly. Fly, John, fly. Funny, funny John. Everyone gets an identical shot, an identical sound bite, a cut-and-paste press release with its awkward, fumbling praise and bad grammar. Kilroy was here, translated into 100 languages and reposted on 100 000 celebrity-watch blogs.

Outside, in the cold, I was humming the White Stripes’ Icky Thump: “You can’t be a pimp and a prostitute too.”

I had spent the past 48 hours furiously sucking up the local public relations team in charge of events, selling myself as an “author” and trying very hard not to sound like a desperate hack. It had been years since I was on the celebrity circuit (the last famous person I met might have been the guy from Miami Vice, not Don Johnson, the other one) and I feared my soliciting skills were a little rusty. So far, all I’d managed to secure was an invitation to a VIP cocktail event with Travolta at the Westcliff Hotel. There were vague promises of seeing whether some “face time” could be arranged, but nothing was certain, and I wasn’t prepared to be pushy. Jennifer Su, 5fm’s celebrity reporter, was holding court in the heated media lounge, dressed head to toe in South African flags. And there was no way I could compete with that.

Travolta was scheduled to land at 10am, flying in his Qantas-branded private boeing 707 (Travolta, a highly qualified pilot, is a goodwill ambassador for the airline that also sponsors Australia’s national football team) before giving a series of press conferences in support of the Socceroos, spending a morning at the Nelson Mandela Children’s Fund and then jetting off to Durban for the Australian team’s opening match against Germany three days later.

Jostling for space
I was so busy observing the cameramen jostle for space that I missed the plane landing and wound up watching the Boeing make its approach to the terminal through the legs of a photographer standing on the railing in front of me. The woman next to me was wearing perfume strong enough to make me write a note about it, longhand. Don’t let anyone tell you it’s not glamorous, this job.
We could see Travolta signal from the cockpit as he taxied, posing the aircraft on the runway for the waiting photographers.

Minutes later he appeared at the top of a set of hastily rigged open steps, his captain’s uniform blowing in the wind as he smiled and waved.

When Travolta’s family joined him — his wife Kelly Preston and daughter Ella — the crowd emitted a pathetic little cheer and the photographers snapped away furiously. Travolta may have been the star, but the money shot was all about Preston: a few weeks earlier the 47-year-old actress had confirmed she was pregnant with the couple’s third child. The news had come a little over a year after the death of their son, Jett, who died in the Bahamas after reportedly suffering a seizure at the family’s home. In the months that followed the incident, Jett’s health and Travolta’s personal life — including his Scientology beliefs — had come under intense public scrutiny after three people were arrested and charged for an alleged multimillion-dollar extortion plot against the actor.

If Travolta was weary of being centre stage he showed no signs of it, not even after a long flight. When he emerged into the press lounge a short while later (after clearing customs) he looked in good colour, a gold wedding band and watch flashing off surprisingly large hands. He was bigger than I expected, broad on the shoulders. Good profile — patrician. Like a wise politician. Maybe he’s had a little work done.

Members of the press (who, moments earlier had literally been knocking one another over in the race to get the best spot indoors for their mics and cameras) went silent as the speeches began: first the chief executive of Qantas, Alan Joyce, an unassuming and engaging Irishman who’d been completely ignored by the press contingent outside. And then Travolta himself, who spoke about his childhood love of planes, growing up under the flight path at La Guardia in New York, the romance of airports, travelling and flying.

A consummate performer
The actor was a consummate performer, carefully dropping in references to Qantas and the airline’s excellent safety record at just the right moment, never dropping his easy grin. I heard him give much the same talk a few hours later and it never sounded stale.
Travolta likes to drop in references to his movies as he talks — mostly Grease. I guess “I got chills, they’re multiplying …” resonates better with mass market audiences than Tarantino. It also makes for a perfect news insert, cute and unoffending. Like margarine on a sandwich.

The press, for the most part, seemed to love it and reciprocated with their own bromides: What’s your favourite animal out of the Big Five? If you played football, what position would you play? Will you buy African baby clothes for your unborn child? Can you do the Diski dance? Travolta answered everything good-naturedly (and even attempted a mini Diski move or two), but only really came alive when he was asked about flying — describing it as providing a “wide spectrum of pleasure”, explaining that he loves the challenge of the technical aspects and the reward of the whimsical ones. “Seeing the world from that perspective is therapeutic,” he said.

Then he posed with a Socceroos scarf, twirled a soccer ball a few times on his fingers until he was sure everyone got the shot they wanted and then disappeared behind closed doors. Later I heard that he shook hands with practically everyone at Lanseria airport.

Fast-forward several hours and it was time for the cocktail party at the hotel — a different crowd: travel agents and frequent flyers, a handful of consular staff. People magazine was there. So was Felicia Mabuza-Suttle. And a woman who’d paid $1 000 to fly in from Zambia for the night, just to meet her idol. The Australians drank shiraz and nobody talked about rugby or cricket. Outside you could see the giant football on the Hillbrow tower.

When I’d left the airport, the PR person had pulled me aside and whispered that there was the possibility of a personal interview. I came to the hotel bearing gifts: copies of my books on Johannesburg, hand-wrapped in football-printed shweshwe fabric and inscribed to Travolta and Alan Joyce. I wore a dress by Stoned Cherrie and earrings by Ida Elsje and sang my pitch so many times to so many different PR people that I got tired of my own voice. In the end the closest I got to any personal time with Travolta was shaking his hand as he cruised the room. I told him I’d written a book about Johannesburg and left it for him as a gift. He said I was very kind. And moved on to the next person. I forgot to even ask for a picture.

All over again
The following morning I did it all over again, this time at Kloofzicht Lodge in the Cradle of Humankind — the Socceroos base camp for the duration of the World Cup. When I pulled up at the gate the PR woman I’d met the day before gave me a blank stare and asked if I was a member of the press. I eventually arrived at the main lodge, only to overhear an exquisitely coiffed 5fm DJ Koula ask one of the on-duty SAPS officers to sort out the coffee machine that had mysteriously stopped working. The Australian journalists were talking about elephants, drawing long tusks with their hands, and discussing whether adrenaline made venison less palatable to eat. The press photographers were marked out like deer hunters in their bright orange vests.

I’d been on the junket circuit for less than 24 hours and my thin veneer of interest was already cracking. While we waited I watched one of the PR women walk up and down the slate tiles, heels clacking, phone permanently attached to her ear. I noticed that Koula’s feet were blue with cold inside her shiny black stilettos. The television cameras created a wall of tripods and lenses and wires and I couldn’t summon up the energy to fight my way through. When Travolta arrived, accompanied by the Australian football team, I was again reduced to watching the parade through the arms, legs, crooks of the necks of the other press. The movie star and the athletes stood and laughed and posed and sang a few lines from (you guessed it) Grease. Then everyone had their photo taken with Travolta. When the team had finished, the lodge manager — who’d been loitering at the side — crept up and asked if she, too, could have her photo taken. I guess that’s all most people wanted out of this: Their chance to have their picture taken with Danny Zuko.

When I left, I could hear the kitchen staff singing Shosholoza for their guest of honour. “Go forward/ You are running away.”