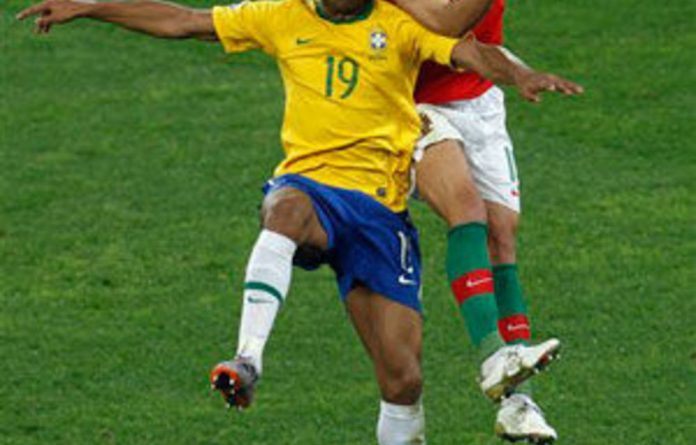 Much like how current Brazil coach Dunga came to personify the 1994 World Cup-winning Seleção he captained, the 2010 crop possess as gritty and commanding a totem: Inter Milan centre-back Lucio.

The current Brazil captain is a rugged street fighter when it comes to bottling up opponents and defending his goal with his skills occasionally lifted from football’s darker alleys.

At Friday’s goalless Group G draw between Portugal and Brazil at Durban’s Moses Mabhida stadium he was masterful in containing Portugal’s Cristiano Ronaldo. The hyper-gelled forward was playing at the apex of a front three with Fabio Coentrao and Danny flanking him out wide.

Such was Lucio’s dominance of Ronaldo that it appeared utterly incongruent with events on the field when the latter was announced man of the match — just goes to show that the adjudication of such matters should not be left to the drinkers of recycled pee bottled and marketed as beer.

Aside from a dashing back heel that drew applause from the 62 712 sell-out crowd and the occasional wildly wide shot, Ronaldo’s major contribution to the first half was a series of pouts and admonishments of teammates.

The Real Madrid player fared slightly better in the second half, but his most penetrative opportunity was snuffed out by, yes, Lucio. In the 60th minute Ronaldo jinked past Juan in the middle of the Brazilian half and sped towards goal. Momentarily, it seemed that he had almost befuddled Lucio with his speed, but the centre-back recovered enough to execute a desperately perfect block on the Portuguese striker’s shot. The deflection rolled over to Raul Meireles at the far post, but the midfielder’s stab at the ball flew wide.

It was one of the few chances that Portugal had in an ill-tempered match characterised by fouls, faking and continual gamesmanship.

While Brazil created more of the overall chances and the first-half’s aggression suggested that the bubbling of tempers — seven cards were handed out by Mexican referee Benito Archundia in total — may lead to a footballing explosion, this failed to materialise.

Instead, these two teams, linked through colonialism and a tradition of beautiful football, clobbered the stuffing out of each other in a rampant display of machismo.

Scratching their heads
So many scribes were scratching their heads and wondering what brand of beer goggles Portugal coach Carlos Quieroz was wearing during the match. Quieroz called the game a “spectacle” and a “football feast”. There are probably more than just a few people who were reportedly buying R140 tickets for about R5 000 who might beg to differ.

“Portugal defended from the midfield backwards, making it hard for us to penetrate their defence … we had to try to keep possession to tire their players out,” said Dunga of his team’s occasional lack of impetus.

He was sneering of the Portugal team’s approach, saying: “We aren’t happy because we always play to win. We tried to attack, but they didn’t want to attack — Football should be the people’s joy. It is the people’s joy.”

With Kaka suspended after being sent off controversially against Côte d’Ivoire in their last match, Dunga used the opportunity to redesign his forward line, with strikers Julio Baptista and Nilmar supporting Luis Fabiano.

Elano’s knock in that game meant Dani Alves won a place in the starting line-up in midfield, rather than his usual fullback position.

None of Brazil’s supporting staff given a run out impressed much. Nilmar, having one opportunity when he controlled and chipped a ball over Ricardo Costa to run on to, sent his shot high and wide.

Asked to comment on Lucio’s game, Dunga was quick to point out his captain’s merits, including his technical capacity and that he had “intercepted all the passes and he won all the loose balls”.