Leaders play down austerity split on eve of G20 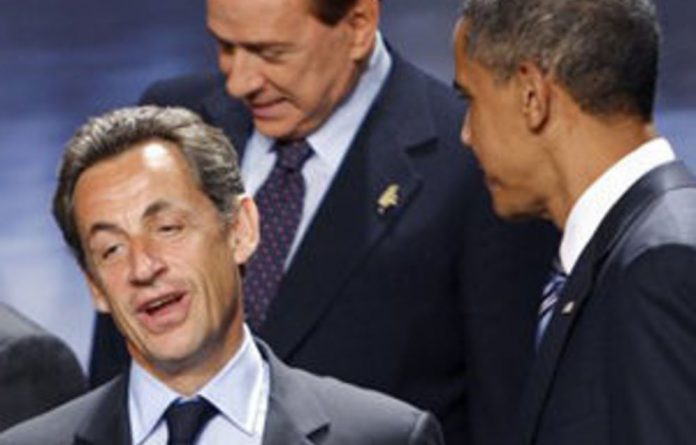 The world’s richest economies, saddled with huge debts after spending their way out of the credit crisis, papered over differences on Friday on how to clean up their finances with minimal damage to growth.

Leaders from the Group of Eight, a club that spans the large industrialised nations and Russia, met in Canada before a broader summit with China and other rising economic powers of the G20, now the world’s dominant economic policy forum.

Washington appeared to be at loggerheads with Berlin in the run-up to the Canada summits. US officials expressed concerns that a nascent recovery from the global recession could be derailed by accelerating austerity in much of Western Europe.

German Chancellor Angela Merkel said, however, that the G8 talks had not produced any conflict over economic policy.

“The discussion was not controversial but was based on great mutual understanding,” she told reporters.

A US official said, “There is a broad consensus among the G8 leaders, a convergence of views … about how to maintain durable growth while also reaffirming, of course, the common shared commitments to fiscal consolidation going forward.”

According to off-the-record briefings by European officials, US President Barack Obama told his counterparts he was worried that excessively deep and fast cuts in Europe could eat into growth, but he did not question the need for cuts themselves.

The Group of 20 has struggled to keep the unity of last year when governments pumped trillions of dollars into the economy to prevent recession turning into depression and vowed to prevent another credit crisis from endangering the world economy.

Obama, buoyed by a deal in the US Congress in the early hours of Friday to toughen rules for Wall Street, urged other G20 leaders to make good on promises to curb risky bank behavior that sparked the financial crisis in 2007.

“We need to act in concert for a simple reason: this crisis proved, and events continue to affirm, that our national economies are inextricably linked,” Obama said, calling on other leaders to match the U.S. progress on financial reform.

Surging debt burden
Burdened by surging debt, G8 leaders said on Friday they would spend $5-billion over five years for mothers and their newborns in Africa, shying away from bold aid pledges to the world’s poor after failing to meet previous targets.

As rich economies slowly heal, helped by strong Asian growth and demand, disagreements over the next steps in the response to the crisis have unsettled investors who fear that a splintering of policy could undermine recovery.

“The cohesion generally evident among policymakers in dealing with the global crisis is in danger of giving way to a more divisive debate about how to manage the recovery,” Credit Agricole analysts said in a note to clients.

Canadian Finance Minister Jim Flaherty said he was cautiously optimistic the G20 nations could reach an agreement on targets for cutting their budget deficits, while South Korean Finance Minister Yoon Jeung-hyun highlighted concern the recovery is too fragile.

“No one knows for certain how the post-crisis world economy will look like. It is my opinion that we will enter a phase of jobless and low economic growth,” Yoon said.

Obama, concerned that the recovery is tenuous, faces high US unemployment and the possible loss of his Democratic Party’s control of Congress in elections in November and he has been reluctant to adopt spending cuts to curb the deficit.

The aggregate debt of the rich countries within the G20 is expected to hit 107,7% of GDP this year, almost three times the 37% debt forecast for emerging market economies of the G20 and up from 80,2% at the outset of the crisis in 2007, the International Monetary Fund says.

British Prime Minister David Cameron, whose government unveiled an austere budget this week, said smoothing out imbalances between export-rich countries and debt-laden consumer nations would require belt-tightening by America too.

“Part of dealing with the imbalances is for the worst deficit countries to roll up their sleeves, get on with the job and make sure they are living within their means,” he said.

The G20 pledged last year to coordinate a string of banking reforms by the end of 2012. Obama can boast he is meeting the bulk of those commitments. Europe has yet to come up with comprehensive rules for financial reform.

China seemed to defuse some of the G20 trade tension last weekend when it said unexpectedly it would ease its grip on the tightly managed yuan. But some economists have questioned whether the move was anything more than symbolic.

A Brazilian official said G20 negotiators were considering including a line in the summit communique that would welcome Beijing’s latest shift and urge it to follow through with a stronger appreciation in its currency.

“The communique might come up with this idea, it depends on China. The Chinese are still negotiating over the terms and the language of this particular statement,” said the official, who spoke on condition of anonymity.

About 2 000 anti-G20 demonstrators marched to within a couple of blocks of the US Consulate in Toronto before they were halted by riot police. At least one person was arrested.

Should the G20 need a moment of levity, it has the Soccer World Cup in South Africa.

Asked if he and Merkel would watch England play Germany on Sunday, Britain’s Cameron said: “There is an idea we might try and watch it together. I will try not to wrestle her to the ground during penalties, but we will have to see.” – Reuters