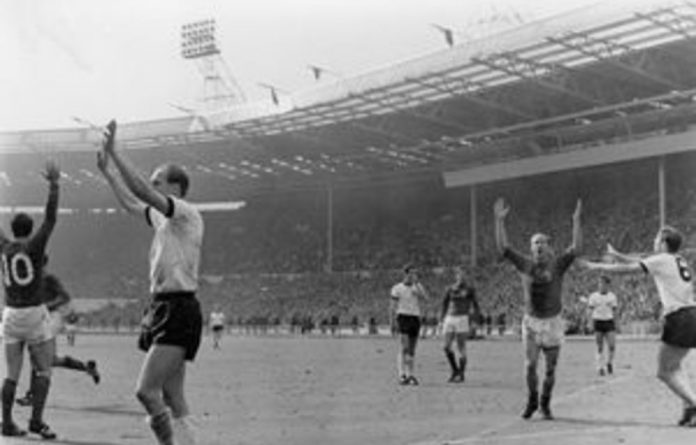 Should technology be used to help eliminate controversial decisions made by football referees? The debate rages on ….

Refs need assistance
The controversy surrounding Frank Lampard’s disallowed goal in the match against Germany has disguised just how terribly England played in this World Cup. Some of my colleagues rightly predicted that the inventors of the game would not progress very far in the tournament, contrary to the pre-tournament hype perpetuated in their media.

Germany hammered the Brits 4-1 to send them packing out of the tournament. Thanks to the absence of technology, the focus has shifted to a goal which, in all honesty, should have been given, but was missed by the referee.

Football has always been a trendsetter in a sport. Long before cricket or rugby could dream it, the beautiful game started a World Cup in 1930.

Sadly, other sports have overtaken the beautiful game in recent years, largely because of the rigid leadership style of Fifa president Sepp Blatter. In the past he has refused to entertain the introduction of television technology despite some crucial refereeing blunders that eventually had a bearing on the final result of important matches.

France would not have been in South Africa for the World Cup if a few seconds had been spared to review Thierry Henry’s hand-assisted goal against Ireland in the qualifiers. More significantly, the sport would have been saved the embarrassment of the millions of fans seeing Lampard’s disallowed goal or Argentinian Carlos Tevez score from an offside position against Mexico.

Former players and refs appear finally to have convinced Blatter to consider technology since the England game outrage. The Fifa boss has not only apologised to England and Mexico but has gone further to say the issue of technology will be discussed next month. But the final decision is expected only in March next year at a full council meeting scheduled in Wales.

It is maybe too harsh to hold only Blatter accountable.

As early as 1966 England is said to have won the World Cup with a controversial Geoff Hurst goal. Then came Diego Maradona’s “Hand of God” goal that knocked out England in 1986. These and many examples should have been enough justification for the introduction of technology.

For me, the starting point should be goal-line technology. Football is about scoring goals that ultimately win matches. If there is some reluctance to have too many stops during the match, determining whether a goal is genuine or not should be introduced first. It would not take more than 20 seconds to analyse this.

In fact before the Italian referee Roberto Rosetti and his assistant concluded their little consultation in the game after Tevez scored, the world had already seen through television replays that the player was miles offside.

Football has evolved too much in the past 80 years, not only in terms of speed but in terms of what is at stake, to leave such crucial decisions to the discretion of the naked eye. The prize money runs into millions, coaches’ careers and national pride are at stake.

Still, Fifa in its usual arrogance has failed to address the real problem and instead used the poor men in the middle as scapegoats. Mali referee Koman Coulibaly, who denied USA a win over Slovenia, was chopped from the group of officials in the next round. Uruguayan Jorge Larrionda, who refused to award the England goal, and Italy’s Rosetti, who let Tevez’s goal stand, were sent home.

With this action Fifa has ruined the careers of these men. Officiating is a tough job that requires decisions to be made in split seconds. Given this thin margin for error, mistakes will be made even by the most vigilant of refs.

Fifa should assist the few good referees to do their job by allowing the use of technology. Only in this way can the sport be saved from being riddled with errors and allow the correct decisions to be implemented. This, in my view, would do more for Fifa’s “fair play” messages than simply having a flag carried on to the ground before kickoff. — Phatisani Moyo

Don’t spoil the fun of the game

The second-round matches of Mexico vs Argentina and England vs Germany have reignited the debate about the use of technology in football. Fifa president Sepp Blatter has previously steadfastly refused and argued that technology will remove the human element from the game.

I have to agree with him on that one. The game is brilliant as it is, with the added edge of getting decisions for or against you being part and parcel of the game. Introducing technology will, to an extent, diminish this. This will also take away one of my favourite pastimes: moaning about how the referee cost us a game.

Two of the most famous decisions, or goals, in world football — Geoff Hurst’s goal in the 1966 World Cup and Diego Maradona’s “Hand of God” in the 1986 World Cup have been endlessly talked about. There’s no sign that this will diminish for another 100 years or so.

If video technology was in use, the goals might not have stood. The controversial moments create talking points, the discussions and the disagreements from ekasi to the taxi rank all the way to the offices are what make football the beautiful game.

Disputes about whether the ball has crossed the line are few and far between, Frank Lampard’s shot against Germany being a case in point, as before that there had been no such claims in the tournament.

Football is a flowing game and to keep halting it whenever there is a dispute will kill its spontaneity and passion and render the game boring as it becomes a stop-start affair. Imagine you are watching an excellent match with a lot of goal-to-goal action.

Think of the deflation that comes when it has to be stopped for two minutes or so to analyse a controversial decision. The minute something like that happens, we would have killed the match.

With technology we could also take the raw passion of the players away. Maradona, one of the greatest players ever to walk the face of the Earth, says he was driven on by anger whenever decisions went against him and his team. That spurred him to push harder and go on to the next level. Thierry Henry admits that he did cheat with that handball against Ireland but, with video replay, the goal would have been disallowed. Like all the other curiosities of the sport, this would have ruined the whole charm of football.

The other reason Fifa has refused to budge is because the technology is expensive and therefore cannot be installed all over the world at all soccer matches — amateur and professional. Europe, some parts of Asia and the Americas could have the infrastructure to host such technology, but what about the rest of the world, where the game is equally enjoyed?

There are also a lot of decisions to be made; if it is used for goal-line decisions, someone else will ask: What about offsides? The tackles? Sendings-off? The only way to keep the fire in the game burning is to leave the element of error in all decisions or else we will end up with a dull and sterile game. Technology has made things more exact but, as so often in sport, less fun. — Joseph Misika