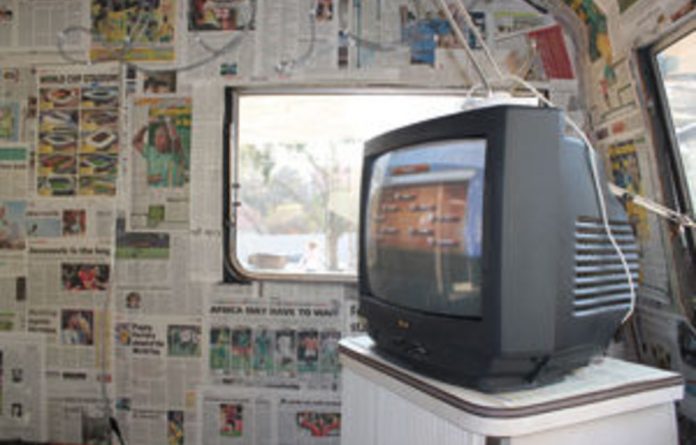 If you are tired of overcrowded fan parks and don’t have tickets for any remaining World Cup matches, there is a fun alternative out there. As part of its “Football Meets Culture” initiative, the Goethe Institut in Johannesburg has set up a so-called “trailer park” in its backyard.

The trailer park consists of five redesigned caravans, each equipped with an old-style antenna satellite TV. Visitors decide which of five interior decors they want to savour: Psychedelic, soccer-themed, newspaper-plastered, half-open to the elements or standard middle-class holidaymaker style.

Adding to the intimate holiday atmosphere are soccer balls, beach sand and a foosball table during the day and by night fire barrels and minimal lighting.

The idea of caravans as football viewing spaces originated in Berlin during the 2006 World Cup in Germany. It was a great success that continues until this day. “There is this European camping culture we wanted to get at,” organiser Kaj Osteroth told the Mail & Guardian. “But the question here was also: How do we do it differently to Berlin?”

The Goethe’s solution was to borrow from European inner-city beach clubs. The banks of rivers such as the Seine in Paris and the Main in Frankfurt turn into hip locations for tanning, playing beach volleyball and dancing every summer.

German visitor Volker Schöer thinks the trailer park revives a European movement from the mid-1990s, “when cheap was cool”.
“Look inside the caravans,” he said, pointing at one. “It is not ‘proper’. You are crammed in there with a whole bunch of people you do not know. It is cheap, it is loud, but it is nice!”

It is also child friendly, Schöer said. When the sun is out, children build sand castles and run around the facility “and you just watch them through the window of the caravan”.

Director of the Goethe Institut Katharina von Ruckteschell wants the trailer park to host everybody. Not-so-glam trailers and DJs from all parts of Johannesburg comprise a mix that the Goethe hopes will break the “fear of contact” of the city’s diverse social layers and induce visitors to share the small spaces of the caravans, Von Ruckteschell said.

The Goethe Institut is based in a house on Johannesburg’s Jan Smuts Avenue. It doesn’t have a high perimeter wall because that was demolished last year to commemorate the fall of the Berlin Wall 20 years ago.

Leisel Ackerley and her friends stopped by last week in search of a good place to watch German matches — it was her first visit to the Institut. “It is such a cool idea with such a cool vibe,” Ackerly said. “But not enough people know about it.”

“Which is kind of nice,” her friend said. “I live in Melville and I am tired of the crowds there all the time.”

The Goethe Institut Trailer Park is at 119 Jan Smuts Avenue, Parkwood, and is open every day from 1pm until the end of the last match of the day, until July 11