Mandela ‘autopsy’ just not on 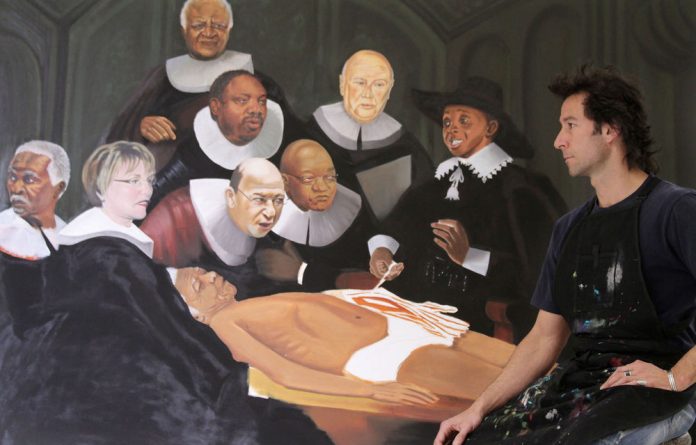 A painting depicting Nelson Mandela as a corpse by a Johannesburg-based artist has caused an upset — individuals ostensibly close to the Mandela family kicked up a fuss about it on Wednesday.

The artwork by Yiull Damaso is a modern take on a well-known work by Rembrandt: The Anatomy Lesson of Dr Nicolaes Tulp. The 17th-century masterpiece depicts an autopsy being performed in front of a small group of spectators — mostly doctors who paid to be included in the painting.

In his version, begun five months ago, Damaso replaced the cadaver with an image of Mandela.

The unfinished work was being housed in the Orpheo Twins store in Johannesburg’s Hyde Park shopping centre when separate complaints were made to the centre’s management and the shop this week. Damaso is completing the painting in an open space at the centre over the next few weeks in an effort to encourage dialogue between the artist and an audience.

He said he was “called into the shop to say that someone wanted to talk to me”.

“The person on the phone told me that she was a friend of one of Mandela’s daughters and that the daughter was very upset about the painting. I was told that they had recently had a death in the family and that they are still very bereaved.”

Nicola van Kan, Hyde Park marketing manager, said she did not know whether the call to the centre had been from someone from the Mandela family or from an official organisation.

“We feel it is a controversial piece,” acknowledged Van Kan, “but we support freedom of expression and art.”

She said the centre spoke to the artist after the complaint.

“He explained the piece and we were happy with that,” Van Kan said.

Damaso was unapologetic. “The eventual passing of Mr Mandela is something that we will have to face, as individuals, as a nation.”

The artist is no stranger to controversy when it comes to depictions of Mandela.

In 2000 he ran into trouble with the foundation when he produced a series of painting of the former president, including one of a dreadlocked Mandela, and one an elderly Mandela wearing boxing gloves and a title belt.

“They told me that his image was copyrighted. But how can you copyright the image of a public figure?”