On Paris, pot and Ziggy Marley 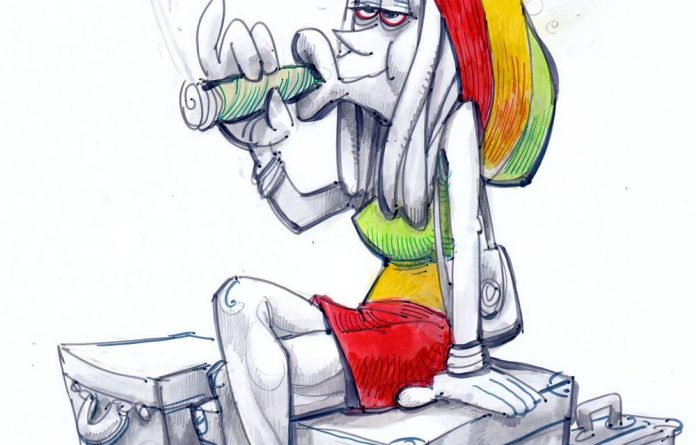 When Paris Hilton arrived in South Africa two weeks ago, she posted a photograph of herself in a mini dress on Twitter, her long legs crossed high, seated atop her entire Louis Vuitton luggage set: a long trunk, and bag after luxurious bag, worth — contents excluded — more than the GDP of most small African countries.

But it wasn’t her crass display of material wealth that got her busted and made international headline news — it was her detention on suspicion of pot smoking outside the Nelson Mandela Bay Stadium in Port Elizabeth.

Of course, The Heiress didn’t inhale. Her freelance photographer friend Jennifer Rovero, a former Playboy Playmate and a single mother of two children from New York, took the rap. She was reportedly fined R1 000 or 30 days in jail. I think taking the R1 000, about $130 back in the US (enough for a quarter of an ounce of high grade hydroponic marijuana) was a no brainer, even for those with no brains.

You see, it’s illegal to smoke pot in South Africa. Even if much of the population partakes, prohibition in our country is alive and well. So you are supposed to be arrested if you smoke or possess or grow this particular plant. Especially if you are an heiress famous for being rich and famous and happen to be smoking the herb outside a Fifa stadium, that is, and not one of the hundreds of ordinary folk who turned out to see Ziggy Marley — in town to commemorate the 30th anniversary of his father’s death — at a free concert at Elkah Stadium in Soweto.

Last weekend, the crowds “smoked marijuana there, with no care in the world while the police watched from a distance”, according to a report in the Sowetan.

Maybe Paris is right. “I’m used to being a scapegoat,” she whined on her Twitter account. I don’t think she or Rovero had heard about Fifa’s firm hand of justice; they should be counting themselves lucky that one of our swift World Cup courts didn’t toss them both into solitary for a few years.

While her attorney tried, according a report in Port Elizabeth’s The Herald, to lamely explain that Rovero didn’t know better because where she comes from, it’s not an offence (um, tell that to the New York police who will slap you with a fine for possession), he had another point that can’t be denied. “I am not sure where she got it from but I can imagine that it is not too difficult to get dagga in South Africa,” Price said to reporters after the court hearing. Yup. Not too difficult is it, kids? But the point of prohibition remains post-Paris.

How did we end up being okay with alcohol available in every bar and bottlestore in the country which leaves people flat faced on a daily basis yet we won’t allow people to smoke a plant that does much less damage? How many guys have you read about that go out and beat their wives after they smoke a joint? Far too much effort for a stoner who would rather lie on the couch and eat ice-cream.

But the stringent anti-marijuana lobby in the West — long criticised for being backed by big tobacco and alcohol companies — has been telling the world that this evil “gateway” drug will have people shooting heroin five minutes after they take a hit. Never mind that tobacco and alcohol are both far more damaging to the body and no less mind-altering. Yet they aren’t deemed gateways to anywhere, except lung cancer and rehab. But like so many other archaic laws, this prohibition was adapted from the West, which still practises it. But maybe not for long.

In California and a growing number of states in the US you can get a prescription for medicinal marijuana to cure what ails you — anything from depression to glaucoma will do. Then you can pop into your local pot pharmacy to find sticky green buds with red and purple hairs in glass jars with potent strains and now-famous names, such as OG Kush and Sour Diesel, that will take away the pain.

The long fought-for medicinal marijuana laws come alongside a firmly entrenched ganja culture. It’s now the theme of the hit television show Weeds, the weekly public TV programme Cannabis Planet and the online show Munchies, which follows top American chefs out on the town with liberal references to pot smoking and then returning late at night to their kitchens. There are reports of California retirement communities where grandpa and granny toke up daily, along with a well-established genre of ganja magazines, websites and books.

But even with United States President Barack Obama’s bold move of pulling the federal attack dogs off states with medicinal marijuana laws — a firm deviation from his predecessor, who ordered raids on legally operating pharmacies — along with estimates by California’s tax board earlier this year that taxing marijuana sales could relieve massive chunks of its crippling debt to the tune of $1,4-billion a year, the war on drugs in the US is in full swing.

So, I never thought I’d say this, but thanks, Paris, for bringing such a serious issue to the international stage. Next time maybe you could inhale and do the Bob Marley thing and get up, stand up, stand up for your rights.