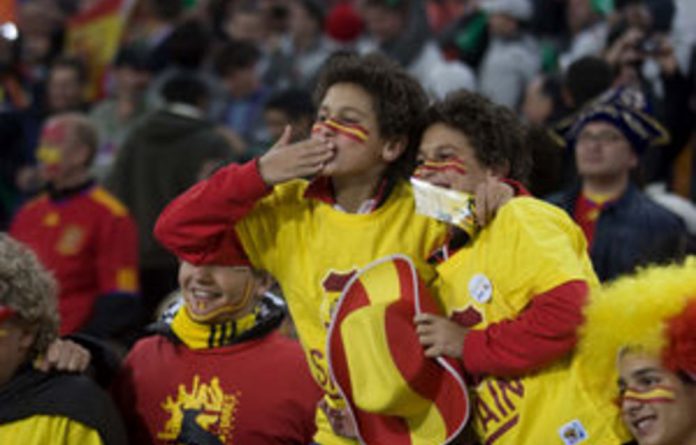 The chants of “Campeone! Campeone! Campeone!” that rang through the bowels of Soccer City in Johannesburg as Xavi, Carlos Puyol and Spain captain Iker Casillas were the first to emerge from the victor’s changeroom, hair still slicked wet by the champagne confirmed it: Spain are champions of the world.

They beat Holland 1-0, after Andries Iniesta teed up and then volleyed in a Jesus Navas through ball in the 115th minute to win their first world cup title ever.

And it was a joyous moment for the Spanish with defender Gerard Pique emerging hoarse from the dressing room and coach Vincente del Bosque taking the hugs and high-fives of everyone in the mixed zone.

Reserve goalkeeper Pepe Reina said: “There are no words to describe it. It’s the biggest tournament in the world so we are really, really proud of what we did. I think the people in Spain are feeling the same.”

‘An amazing feeling’
On Holland playing this final intent on destroying, rather than creating in what turned out to be a joyless final, Reina said: “I don’t mind about the quality of the final. All that I mind is that we have won and we will go into history, it’s an amazing feeling.”

“At the end, I think football itself has won the World Cup,” said the Liverpool keeper.

And, in many ways it felt that way. Spain have been preaching and playing an attacking football philosophy based on the “tiki taka” of delicious short passing for several years now. This while Holland — in this tournament especially — have based their game on containment and precise counterattacks.

To the extent that Oranje legend Johan Cruyff pronounced before this final — where the linkage between Holland and Catalunya’s FC Barcelona had been discussed at length given the shared histories of football philosophies and players like Cruyff — that he saw “more of myself” in the manner in which Spain played football.

And, it seemed, after a month when football provided escapism from the affairs of the world — and the pressing challenges that the host country, South African face — the protagonists where intent on bringing the watching globe back to reality with the sort of force reserved for one of Dutch midfielder Mark van Bommel’s shuddering tackles.

Holland especially came out to spoil in a match that saw 14 yellow cards (including a double from Holland defender Johnny Heitinga that led to him being sent off in the 109th minute of the match).

Key to the match
They ended the match with nine of the fourteen yellow cards with some serious infringements — including Nigel de Jong (already on a yellow) going in with studs up on Xabi Alonso’s chest in the 27th minute.

Alonso, still clutching his chest (and the gold medal on it) called the tackle “the most painful of my life”.

But Alonso conceded that Holland’s approach may have been expedient for them: “Logically, they had to close us down; it was a really tight game with a lot of respect from both sides. We’ve been lucky enough to score just four minutes away from the penalty shootout — that was key for us.”

The Real Madrid midfielder suggested that the Spanish team could go on to dominate world football for years to come: “The basics are there, the style is there, the mentality is there, the team spirit is there so if we keep working this way many more victories may come.

The midfield — where the fluid panache of Xavi, Iniesta and the metronomic passing of Alonso was countered by the sheer doggedness and sometimes dirtiness of Van Bommel and De Jong — proved decisive in this match.

Both De Jong and Van Bommel had squeezed the midfield confrontations into the dark side with a series of disruptive tackles and cynical gamesmanship that ensured Spain — despite all their possession — could not carve out very many clear cut chances.

The Dutch had focused on cutting the ball to Xavi with Van Bommel, especially, on the creative midfielder like an STI rash for most of the game.

A fitting final
While Holland were playing close attention to Xabi, and consequently stymieing the opportunity for him to link with his midfield partner-in-crime at both club and country level, Iniesta, Spain did stutter.

But the southern Europeans also ensured that Holland found it difficult to create with Sergio Busquets paying close attention to Wesley Sneijder and disrupting the Oranje’s tempo.

It proved a dour final but a seemingly fitting one for a tournament of firsts: The first World Cup on African soil saw a first win for the aesthetes from Spain.

Meanwhile, Uruguay striker Diego Forlan received the Golden Ball award as the Player of the Tournament after scoring five goals in seven matches.

Uruguay placed fourth after losing 3-2 to Germany in the third-place playoff on Saturday.

Mueller, 20, was also named the Best Young Player. Iker Casillas of Spain received the Golden Glove accolade as the Goalkeeper of the Tournament. — Sapa