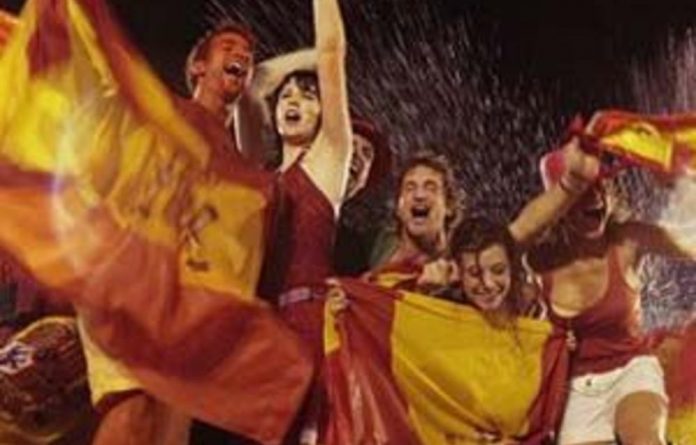 Spain stunned The Netherlands to win their first World Cup on Sunday in sensational fashion with a goal in the last minutes of extra time.

With the scoreless match inching towards a penalty shootout, and the Dutch down to 10 men, Andres Iniesta picked up a pass from Cesc Fabregas to fire home from close range four minutes from the final whistle in Africa’s first World Cup.

The goal sparked euphoric scenes as the Spanish team and bench raced after Iniesta into the corner of the Soccer City stadium to celebrate while the Dutch appeared stunned.

It was the first time the European champions had reached a World Cup final and a bitter disappointment for The Netherlands who finished runners-up for the third time after previously losing the 1974 and 1978 finals.

It was also the first victory by a European side outside their continent.

But the game was far from the classic final hoped for from the two most impressive teams in the tournament and was for large stretches a sterile stalemate.

Spain looked dominant for long passages but a ferociously physical Netherlands team often broke up their rhythm and their renowned precision passing in midfield.

Despite the disappointing quality of the match, the final was a triumphant end to a highly successful tournament for South Africa who confounded years of pessimistic predictions that it would be ruined by violent crime and chaos.

To cap their pride, Nelson Mandela, much loved father of post-apartheid South Africa, briefly toured the pitch waving to the crowd just before the match began.

Mandela (91) who is in frail health, was driven around in a golf cart surrounded by bodyguards and greeted by an ecstatic crowd chanting his clan name Madiba and blowing vuvuzela trumpets.

The former president, who led South Africa out of apartheid in 1994, had been unable to attend the opening ceremony because of the death of his great grand-daughter in a car accident the night before.

Spanish coach Vicente del Bosque told television: “It was a very difficult match. we have fantastic players. We could have scored another goal or two. But I think the result was deserved. It’s a very happy day for me.”

Dutch coach Bert van Marwijk said the better team had won in the end: “It is very sad. These three or four final minutes and then you lose. I really had thought even with 10 we would be able to do the penalty shoot-out.

“It is bitter but that is sport. It is harsh.”

The final in the flagship stadium where nearly 85 000 spectators watched ended with a firework and light display and was preceded by a glitzy opening ceremony fronted by Colombian Shakira performing the official World Cup song Waka Waka with local group Freshly Ground.

The Spanish victory will hugely raise spirits in Spain which is torn by bitter political infighting over how to address Europe’s highest unemployment and crippling debt.

But it will be a huge downer for The Netherlands which went through polarising elections in June that failed to produce a clear winner and had believed this would be their best chance to win soccer’s greatest trophy after an unbeaten run through the World Cup, including qualifying matches.

Despite being the first host nation eliminated at the group stage, locals have remained enthusiastic spectators, helping this World Cup to be the third best attended ever, with three-million seats sold, behind the United States in 1994 and Germany in 2006.

Chief local organiser Danny Jordaan said the tournament had brought the races together and enabled South Africans to walk tall after being told for years they were inferior.

Before the match a man wearing an anti-racism T-shirt ran on to the pitch and almost grabbed the trophy before being tackled and taken away by security men. – Reuters