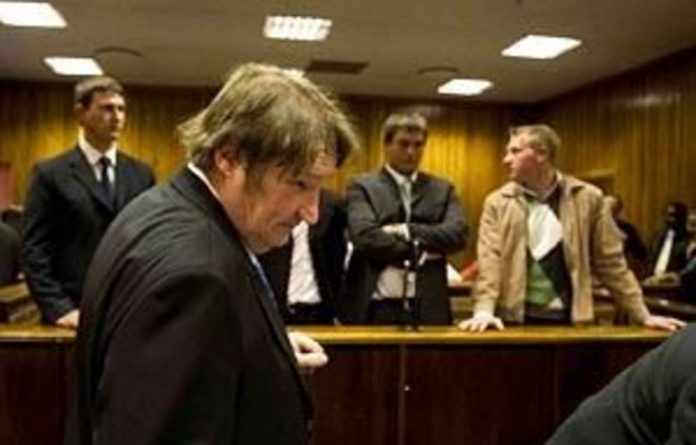 The Reitz Four on Wednesday faced a fine in court after pleading guilty to humiliating five black workers in a video depicting racial abuse at their former university.

They made the video in 2007 as students at the University of Free State in protest at plans to integrate student housing.

One clip showed a young man apparently urinating into a bowl of stew and then serving it to the housekeepers. It ended with the words: “That, at the end of the day, is what we think of integration.”

The video sparked an international scandal when it landed on the internet in February 2008.

In a sentencing hearing on Wednesday, both the defence and the prosecution said the four should face only a fine as punishment, after they pleaded guilty to the charge of crimen injuria, or seriously impairing the dignity of the five workers.

“They deliberately manipulated the five cleaners because they are illiterate,” Kruger told the court.

Magistrate Mziwonke Hinxa said he would decide on the sentence on Friday.

In a statement the boys denied urinating on the food, saying: “It was an act meant to look like urine.”

Mediation efforts had failed to resolve the case, with the workers saying they wanted to pursue a trial against the students. The guilty plea avoided what could have been an emotive trial.

Kemp told the court that the students had not intended to humiliate the workers, but later realised they had done just that.

“The accused did not realise the effect of the video and what it would have on the university and the plaintiffs. They now, in retrospect, accept that the use of the workers for the video was insensitive, ill-considered and wrong,” he said.

Voluntary contributors
The video was shot at a time when the University of Free State was introducing racial integration at student hostels, following decades of race-based hostel allocation.

Throughout the video, the workers were voluntary contributors, who could have withdrawn at any time and understood they were acting, Kemp said.

Kemp said the students had good relations with the workers until the video hit the internet.

None of the young men — Johnny Roberts, Schalk van der Merwe, RC Malherbe and Danie Grobler — are still studying at the university.

The whites-only male hostel where the video was shot was later shut down and eventually reopened as a diversity centre to address issues of racism, sexism, xenophobia and reconciliation.

In October last year, university rector Jonathan Jansen came under fire when he announced the school was withdrawing disciplinary charges against the students, in an attempt to promote reconciliation.

Jansen was heavily criticised for choosing reconciliation over retribution, igniting further debate about the limits of forgiveness in a nation that has already forgiven much of its racist past.

He invited the students to return to campus to finish their studies — an offer none accepted.

The five workers have also launched a civil case at the Bloemfontein Equality Court, where each of the students face are being sued for R1-million. — AFP