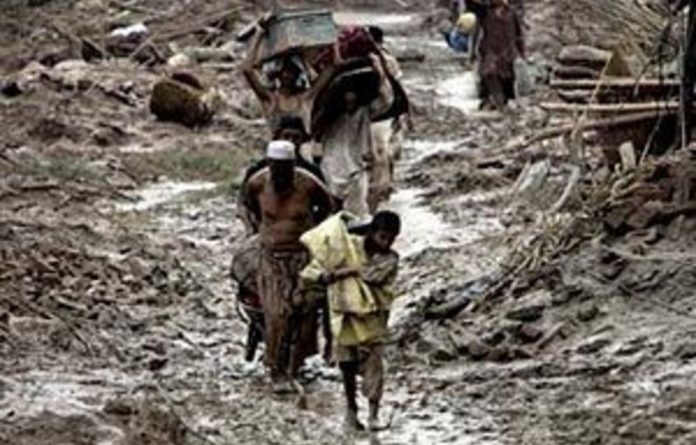 Fears were growing on Monday for up to 2,5-million people affected by Pakistan’s worst floods in 80 years amid outbreaks of disease after monsoon rains killed more than 1 200 people.

Unprecedented rains triggered floods and landslides, sweeping away thousands of homes and devastating farmland in one of Pakistan’s most impoverished regions, already hard hit by years of Taliban and al-Qaeda-linked violence.

Pakistani officials warn that a lack of drinking water is spreading diseases, including cholera, and say they are working to medivac people from affected areas such as Swat, the scene last summer of a major offensive against the Taliban.

The International Committee of the Red Cross announced that up to 2,5-million people across Pakistan have been affected by the heavy flooding.

“In the worst-affected areas, entire villages were washed away without warning by walls of flood water,” it said in a statement, noting that thousands of people “have lost everything”.

Syed Zahir Ali Shah, the health minister for the north-western province of Khyber Pakhtunkhwa, estimated that about 100 000 people, mostly children, were suffering from illness such as gastroenteritis.

A spokesperson for the charity World Vision said teams had visited those affected around the main north-western city of Peshawar, but that those further north had been inaccessible by road until Monday morning.

“They don’t have drinking water or food. They said there have been some visible signs of water-borne diseases,” Muhammad Ali said, warning that the death toll was likely to rise further as aid workers reached more areas.

‘I have lost everything’
At a camp set up by the army for about 640 families in Nowshehra, women and children ran after vehicles bringing food and water, pushing and shouting.

“We are getting patients with trauma, gastroenteritis, skin diseases and dehydration,” Doctor Shoaib Mohammad said at a small 20-bed mobile clinic.

Fifty-year-old Ajmair Shah went into shock after flood destroyed his home in Nowshehra. He lay motionless in his hospital bed and staring into the air.

“My house was swept away by the flood, nothing is left there. I have lost everything,” Shah said and started weeping.

People at the camp said there were no proper latrines or bathrooms and that the only respite from the crushing heat was plastic hand fans. Most of them fled in the clothes they were wearing and many children roamed around naked.

“They throw food at us as if we are animals and not humans,” Ilyas Khan, one angry man said, complaining there was no proper system of distribution.

UN chief Ban Ki-moon pledged aid of up to $10-million to meet the humanitarian needs of those affected by the crisis, saying he was “deeply saddened” by the floods.

The US government announced a $10-million aid pledge and has rushed helicopters and boats to Pakistan. China has also promised $1,5-million, according to the official Xinhua news agency.

Anwer Kazmi, a spokesperson for Pakistan’s largest charity, the Edhi Foundation, said at least 1 256 people had been killed and that Swat was the worst affected district with 475 deaths.

Khyber Pakhtunkhwa chief minister Amir Haider Hoti told reporters that the floods were “unprecedented” and warned it could take up to 10 days to assess the overall number of dead and displaced.

Pakistan’s meteorological service forecast rains of up to 200mm in the next weeks across the north-west, Pakistani-administered Kashmir, the central province of Punjab and Sindh in the south.

Protests
Scores of flood victims protested in Peshawar for a second day against the sluggish relief effort, shouting “give us aid sent by foreign countries” and “death to the corrupt government”.

Pakistan’s military and the National Disaster Management Authority (NDMA) have been coordinating the relief effort, saying they have rescued more than 28 000 people in Khyber Pakhtunkhwa by helicopter and boat.

The NDMA said nearly 30 000 homes had been damaged across the country.

In addition to 1 200 people killed in the north-west, local officials said 53 people died in Pakistani Kashmir, 26 in south-western province Baluchistan and 49 in Punjab, Pakistan’s most populous province.

The southern province of Sindh went on red alert, spokesperson Mazhar Siddiqui said, fearing that 150 000 people could be displaced by expected floods there. — AFP