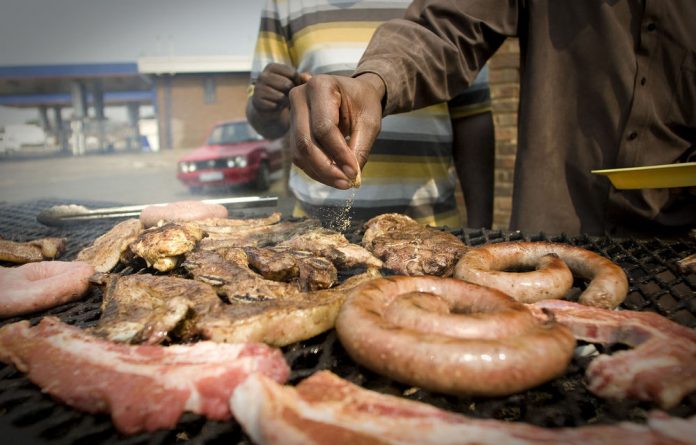 In the face of climate change, an alternate strategy for reducing emissions could be to build a responsible food culture

Roasting goat, sheep, cow, chicken, venison — you name it — is a friendly social experience over an open charcoal fire. It brings together people from all walks of life. In the United States it is called a barbeque or BBQ and in Australia it is known as a barbie, like the name of a beloved best friend. Over much of East Africa, where it is called nyama choma, strength and pride are its symbols.

But the political ecology of the braai raises concerns of sovereignty over our feeding habitats. Allow me to share a story.

Several years ago we found ourselves in a dusty town called Kitwe in northern Zambia. We checked into a hotel, a marvellous but seedy colonial time machine on the main road to the Democratic Republic of Congo. Our taxi driver was a reserved citizen of the tie-wearing sort. Not used to being invited to a restaurant, he courteously insisted that he would have exactly what I would eat. Unknown to him, I am vegetarian.

In his excitement at the treat he refused to let me explain my palate. So, when his vegetarian meal arrived, he went lethally silent. Offended and sulking, the driver huffed and puffed, quietly excused himself and did not return for a long time. The little food joke morphed into a surprising mess.

Food prejudices and the right to choose what to eat opens new schools of inquiry into food psychology, cultural heritage, environmental ethics and poverty. For meat-eaters, the braai is a hot potato. It is linked to climate change as generated by the livestock industry — cattle farts release greenhouse gases.

The other problems, in summary, involve ecological damage to large expanses of virgin habitats, unethical use of growth hormones for enhancing milk production and hastening tissue development, contraventions of dignity, unpredictable outbreaks of disease (such as tuberculosis, foot-and-mouth and mad cow), market access and competition regulation, animal-theft disputes, and so forth.

Livestock’s Long Shadow, the landmark 2006 report by the United Nations Food and Agriculture Organisation, estimated that 18% of annual worldwide greenhouse-gas emissions is attributable to livestock and wildlife. Last year the World Watch Institute found that livestock and its by-products (including the “cradle-to-grave” livestock supply chain) account for 51% of annual worldwide greenhouse-gas emissions.

The magnitude of the environmental impact of livestock is confirmed by the UN International Panel for Sustainable Resource Management. In its 112-page report, released a few weeks ago, it found that more than half of the world’s agricultural crops are used to feed animals.

Evidently, the carbon footprint of the braai is monumental if both the livestock industry and fuel usage are taken into account. The latter can be estimated by the number of braais a month, whether wood or charcoal is used, and the kilograms of fuel used.

It might be argued that responsible citizenship and a meat-exclusive diet go hand in hand, because the 21st century’s environmental challenges underpin most of our lifestyle choices. Living with a clear conscience may mean no friendship with the barbie.

Yet that would defeat the braai’s social purpose and besmirch its place in human history. Human development, from traditional hunting to the commercial exploitation of animals, reflects an enduring meat-based culture.

A complementary strategy for reducing greenhouse-gas emissions needs to focus on building a responsible national food culture. Replacing livestock products with better food alternatives may be a faster climate-change strategy than long-haul efforts to replace fossil fuels with renewable energy.

We also need better regulations to reduce environmental problems in the ill-managed sectors of the livestock industry.

We live in troubled times. In a world turned on its head by the climate-change crisis (both real and funded), the sanest people are the defenders of the braai who can make sense of the chaos inherent in environmental politics. Fair food choices are open to debate.

Dr Janice Golding is an independent environmental commentator and analyst

Janice Golding
Janice Golding works from Toronto. CTV News. The opinions expressed here are mine alone, and will not always reflect those of my employer. Janice Golding has over 2846 followers on Twitter.
Facebook
Twitter
WhatsApp
Linkedin