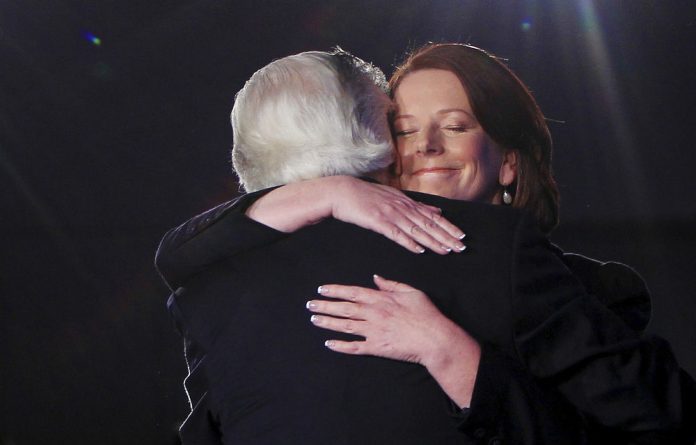 Standing at the lectern in a grey pinstripe suit, Australian Prime Minister Julia Gillard commands her audience with a sharp smile and calm, deliberate words.

“I learned some things about hard work and about making up your mind and standing for what you believe in,” she says. “I learned about listening and learning from others and trying to understand what they wanted and needed.”

Hard work could be the theme of her campaign. The past month has seen her circumnavigate this massive continent several times, meeting, greeting, pressing the flesh in a way that few thought she would have to.

When Gillard became prime minister on June 24, it was a relief for the Labour Party. The popularity of her predecessor, Kevin Rudd, had nose-dived ­- with an election due in months, the party needed a new direction and a scapegoat.

Gillard seemed the perfect solution and was embraced as the country’s first woman premier. But within weeks it became clear a major battle lay ahead.

With the election looming, Gillard is visiting her old state high school in the leafy suburbs of Adelaide. In a marginal seat Labour wants back, she has the perfect audience of 1 200 starstruck teenagers who whistle and cheer.

She looks surprisingly relaxed for someone under enormous electoral pressure. She presents herself as a big sister rather than an Iron Lady.

About 1600km away, conservative opposition leader Tony Abbott’s chiselled cheekbones look tanned. His super-fit frame sits snugly in a fitted grey suit. His image is macho, with language to match.

“When I wanted a bigger mortgage to extend my house, I was pleased that the bank said: ‘Yeah, sure’. But when I face higher repayments, I think: ‘The bloody banks, they’re screwing me blind’.”

Abbott has 200 undecided voters in a town hall-style meeting in Sydney’s blue-collar western suburbs in the palm of his hand. He’s the sort of bloke you’d expect to meet at the pub or chat to at a BBQ over a cold beer.

He’s made sure there have been plenty of photo opportunities with him on gruelling daily workouts, including triathlons.

The pinnacle of his tough-guy image is the pair of small red swimming trunks he dons on surf patrol at his local beach, universally known as his “budgie smugglers” and a rich source of imagery for cartoonists. He’s been harassed more than once by hecklers wearing their own skimpy versions.

Less than a year ago, Rudd enjoyed a 70% approval rating after steering the country through the global financial crisis with no recession and low unemployment.

But, according to veteran social researcher Hugh Mackay, the seeds of Rudd’s downfall were already sown. “Expectations were too high,” Mackay says. “They couldn’t be delivered. Too much hype, overstatement and overpromise — everything was the biggest and the toughest.”

One of Rudd’s key policy platforms was action on climate change, which he called the “greatest moral challenge of our time”.

“To put things in such stark and hyperbolic terms really created the probability of some sort of disaster,” Mackay says. “The euphoria that surrounded Rudd in 2007 made a disappointed electorate inevitable. And when the government stumbled, disappointment was correspondingly greater.”

By April this year Rudd was in trouble. After failing three times to get the centrepiece of his climate change legislation — his Emissions Trading Scheme — through the upper house of Parliament, he dumped it until at least 2013, blaming the opposition.

The public blamed him. “The magic had gone and he’d become a liability,” Mackay says. By mid-year Labour party apparatchiks were imploring Gillard to move against her boss.

She had a reputation inside the party as a highly competent strategist. Her family’s roots in working-class Wales have instilled in her the value of hard work, according to author David Marr.

Gillard is also quick-witted and a formidable opponent in question time, reflecting her legal background, Marr says. “When I see her in a brawl with her opponents, I see a woman lawyer at work. She knows about being tough and sharp but also about the useful limits of aggression.”

But, as a woman, Gillard has been given a hard time on the campaign trail, with personal attacks criticising everything from her dress sense and physical features to the fact she is unmarried.

Her long-time partner, hairdresser Tim Mathieson, has been notably absent from her public appearances. One opposition politician in 2007 accused the childless Gillard of being “deliberately barren”.

Commentators say her support is divided partly along gender lines. “I think women like her and respect her,” says Jordan Baker, from The Australian Women’s Weekly magazine. “They don’t really worry that she’s not married or has a partner.”

Then there have been questions about her loyalty. Rudd has denied leaking damaging material to tarnish her reputation during the campaign.

Gillard has tried to neutralise Rudd’s policy failures, with mixed success — she was his deputy throughout and a member of his influential “kitchen” cabinet.

Her proposal on climate change — a “citizens’ assembly” of 150 randomly selected people to forge community consensus — has been ridiculed as a white elephant.

In the fight with the country’s big miners over a new profit-based tax, which damaged Rudd, she backtracked, meaning that the companies will not pay as much as originally proposed. It’s been enough to get the mining industry’s anti-government advertising off air, but her capitulation was noted.

On asylum seekers — always an important election issue — her proposal for a regional processing centre in East Timor was immediately rejected by the Timorese Parliament. Her leadership started to look shaky.

Abbott’s journey from rightwing ideologue to the cusp of power has surprised everyone. Nine months ago he was an opposition backbencher with a history of gaffes. As a minister in John Howard’s conservative government, Abbott was chief head-kicker, prepared to test public reaction on controversial policies. He bore the flak with pride.

Many saw him as a man of the past, not the future. “Abbott is known to have a tentative interest in policy and not a firm grasp of economics,” Marr says. “It’s no surprise Gillard is a contender to be prime minister — what is a surprise is that Tony Abbott is in this position.”

Mackay agrees. “When Abbott was elected leader, the general mood was, ‘Good grief!’ Even Abbott himself seemed surprised.”

He became party leader nine months ago, defeating his predecessor by one vote. The conservative Liberal opposition was in the wilderness, racked by infighting after a long period in power.

A former Rhodes Scholar at Oxford University, where he represented the university at boxing, he was a trainee priest who once called Australia’s record on abortion “shameful”. He’s also a climate change sceptic who once famously described human-induced global warming as “crap”.

But above all, his campaign has been about border security — stopping boats carrying asylum-seekers landing on Australian shores. Refugees represent less than 5% of immigrants to Australia, but fears about them resonate in many marginal electorates.

“The opposition has done more than anyone to drive this xenophobic panic about the boats into the gutter,” Marr says. “Many would say Labour has followed them, trying to look tough to win votes.”

The strategy is about more than refugees, Mackay says: “Saying something that sounds tough or reassuring on asylum-seekers is subliminally saying: we’re secure, we’ll protect you from rising crime and even anxiety about terrorism.”

The election campaign has been negative, with neither side willing to stick out its neck on any visionary policy. That’s not surprising: a uniform 2,3% swing across the country is all it will take to change the government.

Labour will be hoping history stands it in good stead. No first-term government has been thrown out in Australia in 80 years. —