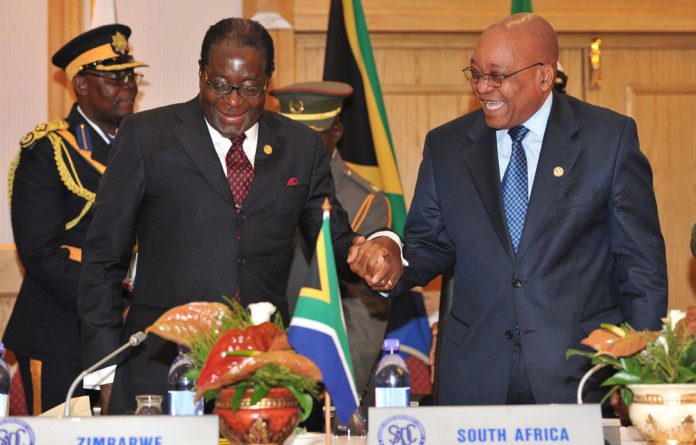 The Southern African Development Community (SADC) has again ducked the demands of Zimbabwean President Robert Mugabe’s coalition partners, allowing him to walk away from this week’s regional summit in Namibia with more than what was offered to the Movement for Democratic Change.

Morgan Tsvangirai and his supporters had hoped that the summit would push Mugabe to resolve three disputes bedevilling Zimbabwe’s government of national unity: the appointments of the attorney general and reserve bank governor and the swearing in of Tsvangirai ally Roy Bennett into government.

But all the MDC got in the SADC’s weak communiqué was a statement commending President Jacob Zuma’s efforts as mediator and urging the Zimbabwe stakeholders “to remain committed to the implementation of the GPA [global political agreement]”.

By contrast, Mugabe won a review of the role of the SADC Tribunal, through which a group of displaced white farmers have sued Zimbabwe, and a new call by regional peers for an end to Western sanctions against him.

However, MDC secretary general Tendai Biti insisted on Wednesday that much more had been agreed than the communiqué let on. Biti said the summit accepted a recommendation by Zuma that the parties should be given 30 days to resolve outstanding issues and set “an uninterrupted path to free and fair elections”.

“The summit recommended that the constitutional process be completed and that it be followed by a referendum, after which Zimbabwe must go for an election,” Biti said.

The SADC would be “persuaded” to help Zimbabwe “draw up guidelines for a free and fair election in which intimidation and violence will not play any part and in which the result would be credible”, he said.

Zuma has been pushing for a definite timetable for elections next year, but no such decision was made, according to Lindiwe Zulu, Zuma’s adviser on Zimbabwe.

The MDC is frustrated by the outcome, the latest in a string of disappointments it has been dealt by the SADC. However, while it would have laid into the regional leaders in the past, the need to mend fences with a region that still regards the party with suspicion forced Biti to moderate any criticism.

He said: “I have absolutely no doubt that if the SADC and the people of Zimbabwe are able to implement the recommendations of the facilitator and can stay within the parameters of the broad roadmap, we can achieve the transition to legitimacy. With some caution, we are pleased with the outcome of the summit.”

As a sign of Mugabe’s continuing influence in the region, SADC took measures that will cheer Zanu-PF. The wily Zimbabwe president has turned Western measures against Zimbabwe into a propaganda tool against his opponents, claiming he is being punished for taking over white farms and that sanctions have destroyed Zimbabwe’s economy.

The SADC summit “reiterated its call on the international community to lift all forms of sanctions imposed on Zimbabwe in view of the negative effects they have on Zimbabwe and the SADC region in general”.

Groups such as AfriForum wanted the summit to censure Mugabe for refusing to comply with the SADC Tribunal’s rulings against farm seizures, but it is the tribunal itself that now faces scrutiny.

Land reform has been the pillar of Mugabe’s rule and diplomats say SADC leaders took the view that forcing him to comply with the rulings — which Mugabe sees as a part of a broad plot to reverse his land policy — would further destabilise an already shaky coalition.

Though Zanu-PF’s Patrick Chinamasa described the move as a “suspension” of the tribunal, SADC secretary Tomaz Salomao told the Mail & Guardian that the court’s role would be reviewed in the next six months by a panel of regional justice ministers and attorneys general.

In a letter published on his Facebook page, the former president ignores the concerns of many observers about the legitimacy of the 2002 elections.
Read more
Africa

Robert Mugabe has said Jacob Zuma should cooperate with other SADC countries instead of trying to turn the region into a market for SA's products.
Read more
Africa

Critics have castigated President Robert Mugabe and the Zimbabwean government for imprinting Zanu-PF values on the theme of the SADC summit.
Read more
Africa

Priorities such as sorting out the economy will be set aside as Zimbabwe focuses on preparing for Zanu-PF's elective congress.
Read more
Advertising
Continue to the category
Education