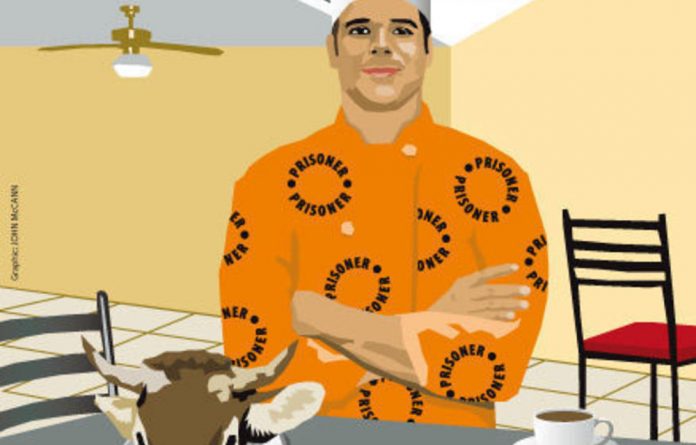 My first meal in prison was at Victor Verster. Lunch was a lavish, three-course affair with enormous plates of meat and roast potatoes in gravy. I was on an indoctrination programme.

As head boy of my school, the nationalist government was grooming us for what they thought we, as young leaders, would have to take charge of — Nelson Mandela was already in Pollsmoor (since 1982), but still a long way off from when Verster would become his gateway to freedom.

The Nats failed. Before I turned 20, I’d read Michel Foucault’s tour de force thesis on the birth of the prison. Ever since, I’ve been firmly opposed to the behemoth Western incarceration system. I hold such deeply unpopular beliefs as being in favour of prisoners exercising their constitutional right to vote. Otherwise, why would they reform or abide by laws in which they have no say or representation when released into a society that excludes them? We never want a society split into a ruling class and a vast, disenfranchised, recidivist prison class — as is steadily growing in the United States — no more than we want the Eastern European scenario of a criminal plutocracy.

Sadly, I do concede (with Charles Dickens) that some people are irredeemably wicked and there is no choice but to separate them from us. Yet they are the exceptions that should not prove the rule. When people call into radio shows and scream about how prisoners live in the lap of luxury in secure buildings with electricity, sanitation, doctors and three meals a day watching TV, I see red. If it is so gemütlich (comfortable), why do these same people phone in to scream about how incompetent the government is because some kid they know was held overnight for a minor offence and ended up being gang-raped and now has an incurable disease?

Fortunately for South Africa, many of our leaders have experienced injustice that placed them on the wrong side of the bars — for the most part it has made them more humane and less judgmental.

Which brings me back to lunch at what must be one of the most unusual restaurants in the world, Pollsmoor maximum-security correctional facility located in the heart of one of the wealthiest areas in Cape Town, on the border of Constantia. As part of its rehabilitation programme, the prison has a public restaurant. It caters mostly for the wardens and their families, but it also attracts some locals and even foreign tourists.

Most visitors to our country hope and pray they will never meet our criminal elements. But Munchkin has some peculiar friends. In February an eccentric British couple decided to celebrate Valentine’s Day by doing something different: a breakfast for 60 of their closest friends — scrambled eggs, grilled tomatoes, bacon fried by inmates and croissants served by murderers.

I was told only petty offenders could work in the restaurant, but Munchkin insists the waiter admitted he was in for homicide. A few months later the waiter was parking cars in Muizenberg, having served his time and told his story. Munchkin was glad they had given him his teeth back on release. (These days, unless you eat the victim, too, perhaps murder is a petty offence.)

Several people at the Valentine’s party had been victims of crime in the past so it was impressively good-spirited of them to be guinea-pigs for offenders. What if they suddenly came face-to-face with one of the men who had tied them up and held them at gunpoint in their home, wondered Munchkin.

What about asking correctional services to add on a few months for getting the eggs wrong — now there’s a way to incentivise good table service.

On arrival the guard checks our car boot at the gate. Then it is a bleak drive past the crowds of demoralised visitors waiting at the entrance, along a road of high security fences, face-brick bunkers, barred windows, razor wire and an enormous guard tower (probably built in the Seventies) strong enough to withstand rocket attacks by one of our youth leagues.

The restaurant is, as one expects, a public works canteen with tiled floors, utilitarian tables and a few stabs at softness with those rattan ceiling fans and faux nouveaux lightshades. The radio is playing. Several wardens in their drab brown coats are watching the floor.

We’ve come for lunch. Our waiter, Waleed, is a friendly, well-spoken convict. Couldn’t hurt a fly, I think.

No alcohol is served so we order ginger beers. “Suppose we can’t ask him what he’s in for?” whispers Munchkin. Neither of us can bring ourselves to be impolite in the face of his genteel manners; besides, there are actual metal knives and forks on the table.

The menu is an A4 page of yellow cartridge paper. It lists chicken schnitzel (R32), chicken cordon bleu (R24), chicken wings (R33), beef schnitzel (R42), Lady’s T-bone (R42), sirloin (R38), rump (R40), burger (R23) and the pork spare ribs “large” is R60. There are “kiddies” choices, too, such as two Russians for R18. Under a section of daily specials are tripe, lungs and hearts, vetkoek, and ox head. Today’s special is a “Gatsby”, a Cape Flats sandwich consisting of a two-foot-long bread roll with various fillings. The classic version is stuffed with steak, salad, chips and spicy relish. It’s a truculent Cape take on Durban’s better-known, laid-back bunny chow.

Waleed recommends the calamari (200g for R32) and the deep-fried, crumbed hake (R33). It comes with “tossed”, which I discover means salad. Snoek “depending on availability” is R25.

The food takes a while to arrive. It is over-salted, but not bad. I have had worse and paid more. Coffee is a sachet of Ricoffy with a pot of lukewarm water.

Lunch for two comes to less than R100. Does he get the tip? Waleed says not; it goes into a general fund. But, would we please sign the visitors’ book?

I hope habitually rude restaurant patrons will keep this story in mind. One day they may meet their match and come up against a waiter trained at Pollsmoor.