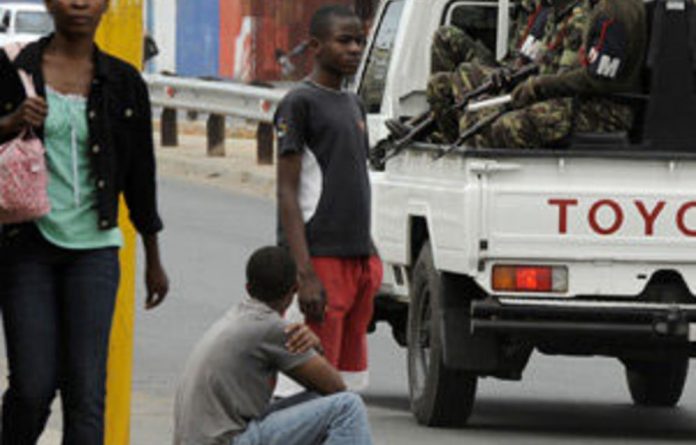 The National Communications Institute of Mozambique (INCM), which regulates telecommunications in the Southern African country, sent a letter to Vodacom Mozambique and state operator mCel on Monday ordering them to suspend SMSing, reported the Mediafax news sheet.

‘The two carriers obeyed the instruction on the conviction that it had been given by the government as a decision framed in terms of national security,” Mediafax reported.

A viral SMS campaign led to price hike riots in Maputo and nearby city Matola last week during which at least 13 people were killed in clashes between police and protesters.

From Monday until Thursday it was impossible to send SMSes from most Mozambican numbers, although the government already on Tuesday announced subsidies for bread and a reduction in government expenditure.

Contract users could still SMSes after both operators protested to the INCM, according to the news sheet.

Mediafax editor Fernando Mbanze confirmed the newspaper had a copy of the letter, but refused to divulge the name of the writer.

‘The letter exists,” he told the South African Press Association. ‘It was sent to both operators.”

Mozambican Minister of Transport and Communication Paulo Zucula earlier this week denied having given orders that SMSing be suspended.

However, Mbanze asserted that, since the minister heads the INCM, he ‘logically” had to have known about the letter.

Both operators earlier acknowledged the networks had experienced ‘technical difficulties”.

mCel declined to comment on the issue and Vodacom did not reply to inquiries.

Wake-up call
Meanwhile, the government said it would reverse a bread price increase, the planning minister said on Tuesday.

“The government has agreed to keep the old price of bread and the costs would be met by subsidies,” Planning and Development Minister Aiuba Cuereneia told reporters.

President Armando Guebuza’s government previously said it was helpless because of the spike in wheat prices linked partly to drought and fires in Russia.

The United Nations special rapporteur on the right to food, Oliver De Schutter, warned on Tuesday that the Mozambique riots should be a wake-up call for governments which had ignored food security problems which arose two years ago.

Police fired rubber bullets, live ammunition and teargas during the three days of protests over the bread price hikes and increases in water and electricity tariffs in Mozambique last week. Among the dead were two children.

The government-imposed price rise took the cost of a bread roll — the bread staple of Mozambicans — to 20 US cents in a country where the average worker earns about $37 a month.

Mozambique also depends heavily on imports from South Africa which have become more expensive as the South African currency rose. Mozambique’s metical has lost about 29% against the dollar and 33% against the rand this year.

Cuereneia said the government would also encourage local businessmen to use the metical when making payments in a bid to help strengthen the unit.

Two weeks ago the government imposed a ban on using dollars to pay school, university and hospital fees.

Cuereneia said old prices of imported food like some vegetables and rice would be maintained through the reduction of customs duty and value added taxes.

Electricity price increases would also be rolled back while new water connection fees would be reduced by 50%.

The government will introduce austerity measures to help fund the subsidies by freezing salary and allowance increases for senior government officials and curbing foreign travel.

Analysts said the bread price about-turn would put pressure on an expansionary budget designed to tackle Mozambique’s lack of roads and electricity, a legacy of years of civil war.

Consequently, the government would have to rely more on foreign direct investment and external aid flows, both of which could fall victim to another global economic slowdown, said analyst Celeste Fauconnier of FirstRand in Johannesburg.

“It will definitely put further strain on the budget,” she said.

The government estimated that the riots caused damage of 122-million meticais ($3,3-million) in the former Portuguese colony where 70% of people live on less than $2 a day. – Sapa, Reuters