Peak fitness is a challenge 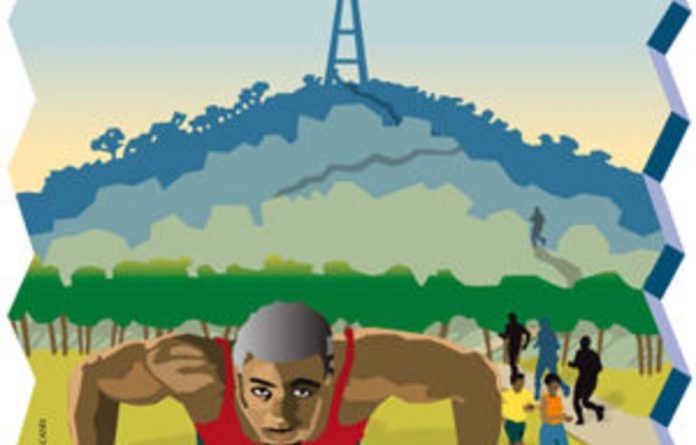 For years I didn’t have the courage to tackle Nyangabgwe Hill. It overlooks Francistown and is one of the city’s landmarks. It’s also a popular “gym” for many residents — a place to burn off unwanted fat , free of charge.

Every morning and after work, young and old from all walks of life take to Nyangabgwe Hill for physical exercise. It looks a lot like Zapiro’s famous cartoon about Mzanzi’s 2009 election, depicting voters in a long, python-like queue, waiting patiently to cast their votes. Although to run up it or walk to the summit is not child’s play , last year I gave in and decided to exercise on the famous hill.

It was in May, after I had had a casual conversation with a former councillor, Motlatsi Molapisi, of the opposition Botswana People’s Party. A colleague once told me the veteran politician was a regular at Nyangabgwe Hill but I didn’t believe him. So during our brief talk I asked Molapisi if he still visited the hill and he said he did.

He told me that it was at a Heart Foundation workshop he once attended in Francistown, addressed by a well-known local cardiologist, Kiran Bhagat, that he was persuaded to exercise regularly on the hill. To beat silent killer s such as high blood pressure, the doctor told the group to exercise regularly. That was when Molapisi and another former opposition councillor, David Tawele, of the Botswana Congress Party, became regular visitors to the hill.

Sadly, he said, Tawele had since lost interest in it. So, the following day after work, I showed up with the other local health enthusiasts. Although I had invited some members of my social Sunday soccer team, the Industrial Super Stars , they weren’t interested. Actually, guess what the response was when I asked them to come along? It was an “up yours”.

Those useless players told me that they would rather continue with their miserable lives of drinking and smoking the green stuff than wasting energy going up and down the hill slope for nothing. One of the wittiest remarked that I was going to the hill because I was broke. Anyway, I ignored those lotus eaters, saved my energy for the work ahead and jogged towards Nyangabgwe Hill.

I found Molapisi, bomadala (old grey-haired men), grannies and youngsters busy on their way. I took it easy, but walking to the summit is not a joke. Luckily I jog every morning and was well prepared for the grannies and old men like Molapisi. They could not beat me, I told myself. It was here that I finally understood how Molapisi, a 66-year-old, took on his opponents single-handed during full council meetings.

In his short pants, he cuts a fine picture of a soccer-dribbling wizard from one of the Central African countries. And he could have been one during his yesteryears, I muttered to myself, as I struggled up the hill. The man is very energetic and a marvel to watch. He jogs his way to the crest, which is very tiring.

If other politicians wanted to match him they would also need join the Nyangabgwe Hill bandwagon, I concluded. Three points to the elderly Molapisi. At the summit the view of Francistown is therapeutic — our city is very attractive when seen from the top. No wonder some joggers bring their cameras and come here to relax their minds after a busy day.

I have to be honest, though, I am no longer a regular at Nyangabgwe Hill. But every time I visit the gym I make sure I go up and down the rough concrete road three times.

The fourth one is impossible, though one day I might break my record. The majority of regular customers of Nyangabgwe Hill, including the elderly politician, go up and down three times. So at least I’m keeping pace with them.

Oarabile Mosikare is a reporter for The Botswana Gazette newspaper. He lives in Francistown