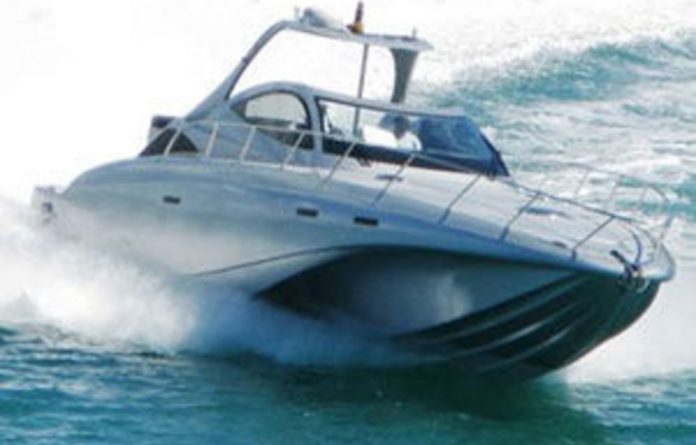 Willem “Ters” Ehlers, a former navy officer and Botha’s private secretary, is no stranger to apartheid-era embargo-busting. Now his company has shipped the speedboat to Iran, where the elite Revolutionary Guard is mass-producing it as an attack craft armed with torpedoes and missiles.

The use of South Africa as an entrepôt, sidestepping American and British blocking attempts, puts the country in a conflicted diplomatic position. Although Iran may consider its tentative relationship with South Africa reaffirmed, Western states may believe that South Africa’s image as a responsible international citizen has been dented.

The transaction appears not to have broken United Nations sanctions targeting Iran’s nuclear programme, but United States export restrictions on Iran were violated, as the speedboat contains controlled US “dual-use” components.

South African arms control legislation may also have been breached. The National Conventional Arms Control Committee (NCACC) confirmed last week that it was investigating. The department of international relations and cooperation maintained, however, that the incident “did not take place”.

Ehlers’s company, Scavenger Manufacturing, claimed his past was “irrelevant” and that allegations about subterfuge and embargo-busting were “pure speculation”.

A Mail & Guardian investigation, however, reveals high drama as Ehlers’s Pretoria-based company, allegedly in concert with others in South Africa and abroad, helped Iran obtain the speedboat after British authorities blocked an initial attempt to sell it directly to Iran. A last-minute US blocking attempt in South Africa also failed.

The ultra-sleek Bradstone Challenger, developed by United Kingdom-based ICE Marine and US defence contractor Navatek, crosses the finish line at Cowes and smashes the record for the fastest circumnavigation of Britain.

With its unique channelled hull and twin US-made 1 000-horsepower engines and surface drives, the powerboat shaves more than three hours off the previous best.

No wonder the US military would reportedly eye the boat. So, too, would Iran, whose small attack craft are strategically vital in the Strait of Hormuz, through which much Middle Eastern oil production passes.

In 2006 the Bradstone Challenger was sold to a “private individual” who used it on the Mediterranean for about two years, a UK industry source acquainted with the circumstances told the M&G.

A UK brokerage, Inward Marine, subsequently advertised it for sale as “the ultimate toy for someone looking for something a little bit special”. According to the industry source and a Financial Times report, an Iranian attempt to buy the boat was blocked by the UK trade and industry department.

For the Iranian buyer, the challenge had now become to get the boat out of the European Union, but with an acceptable third country as the ostensible destination.

The Bradstone Challenger has been here for 11 days — it came in on a cargo ship from Antwerp on January 12 — but already the Americans have caught up with it. Tomorrow it is to be loaded on to another cargo vessel, destination Iran, and US fax machines start humming.

The Financial Times claims that the US commerce department asked South African authorities to block the transfer, saying it was worried the Revolutionary Guard would use the boat as a fast attack craft. Local authorities failed to act, the report quoted a source as saying, because “no one saw the US notice sent by fax over a weekend”.

The US embassy in Pretoria refused to confirm or deny the allegation this week, but public evidence in the US confirms that the Americans were faxing that Friday. The US Federal Register published a notice three months after the incident, slapping trade restrictions on the parties allegedly involved. As background, it said the commerce department had sent initial restriction notices to two Iranian entities and a Cape Town company, Icarus Marine, on that Friday, warning them not to proceed with the re-export — but to no avail.

Icarus Marine is a small design consultancy co-owned by its managing director, Shawn de Villiers, and naval architect Gunther Migeotte. The US still regards Icarus Marine as a culprit, as a further notice in June this year placed it and its Norwegian sister company, Icarus Design, on an “entity list” of persons “acting contrary to the national security or foreign policy interests of the United States”.

The list means that permission for the export of sensitive US technology to them will be refused — a form of trade sanction.

De Villiers told the M&G he believed Icarus Marine had been implicated “by association” because of separate design work it had done for a Tehran company, the Tadbir Sanaat Sharif Technology Development Center (TSS), importer of the Bradstone Challenger on the Iranian side.

In a letter to the South African defence department last year and obtained by the M&G, De Villiers repeats the claim that Icarus Marine was not involved, but seems to point the finger at his own business partner, Migeotte, whom he says is associated with a Malaysian company, Austral Aero-Marine, which organised the earlier contracts between Icarus and TSS.

Migeotte declined to comment, putting down the phone after saying: “I am discussing the matter with the South African government.”

Apart from Icarus Marine and Icarus Design, the US entity list also slaps export restrictions on Austral Aero-Marine and others in New Zealand, the UK and Hong Kong that allegedly helped Iran acquire the speedboat and provided “technical assistance on Iranian naval projects”.

Also on the entity list is Scavenger Manufacturing, co-owned by Ehlers and Ralph Brucher, a mountaineering enthusiast. Scavenger manufactures clothing and accessories for outdoor, security and military use. Its clients are believed to include South African special forces units.

The M&G independently verified Scavenger’s central role in the transaction: shipping sources confirmed that it was the “shipper” of the speedboat — the formal term for the party responsible for the cargo — as it transited South Africa.

Scavenger maintained in reply to questions that the Bradstone Challenger was “a recreational craft” and South African customs would not have cleared the shipment if there were restrictions. It said that “the world follows UN directives regarding export controls to Iran and none of these were breached”, but refused to comment on the fact that it had been placed on the US “entity list”.

The company claimed it was “completely irrelevant” that it was also a local special forces supplier and dismissed allegations of subterfuge as “pure speculation”.

The Diplomat, a cargo vessel which had called specifically to load the Bradstone Challenger, sets sail without hindrance for the strategic Iranian port of Bandar Abbas, at the head of the Strait of Hormuz.

The Diplomat, like other vessels owned by the Islamic Republic of Iran Shipping Lines (IRISL), has been on a UN sanctions-related watchlist since March 2008. This may explain why when it docked in Durban it had changed its name from the Iran Mufateh, its flag to Hong Kong, and its “ownership” to Starry Shine, an IRISL front company.

Within a month of the Diplomat leaving Durban, it changed its name again, becoming the Amplify, according to the Federal Register.

Rear Admiral Ali Fadavi, of the Revolutionary Guard Corps navy, addresses a ceremony marking the receipt of 12 speedboats equipped with missiles and torpedoes. He promises better to come for his men, boasting about the acquisition of the Bradstone Challenger.

“[It] is a British ship that holds the world speed record. We got a copy [on which] we made some changes so it can launch missiles and torpedoes,” AFP reported Fadavi saying. He says that the Revolutionary Guard would be equipped with many of the boats within a year and “in case of a conflict, we will be everywhere and nowhere to face the enemies”.

Who is Ters Ehlers?

Ehlers was employed by GMR, a group formed by shady Italian Giovanni Mario Ricci. GMR is widely held to have helped bust sanctions against the apartheid state by using the Seychelles as an entrepôt after “superspy” Craig Williamson founded its local branch in the mid-1980s.

A 1996 United Nations report into arms sales to Hutu forces responsible for Rwanda’s genocide contained Ehlers’s admission that he brokered an arms consignment from the Seychelles to Goma, a Congolese town bordering Rwanda, in June 1994 during the genocide.

Ehlers claimed the supply of 80 tonnes of rifles, grenades and ammunition did not violate a UN embargo as he believed it was destined for the Zairean army.

The UN report showed that Ehlers’s “Zairean” customers were Rwandans.

In 1996 Ehlers was embroiled in further controversy when Namibia impounded a Russian cargo plane allegedly flying fuel illegally into Angola, where the rebel movement, Unita, was under UN sanctions.

A Namibian deputy minister told the Mail & Guardian that Ehlers had approached him to smooth the way for the flights. Ehlers acknowledged “applying” on behalf of the aircraft owner but denied involvement with the cargo or flights.

This week Scavenger Manufacturing said Ehlers’s past was “completely irrelevant to the [Bradstone Challenger’s] import and export … any defamation of character or false allegations will be followed up legally; these events took place in the 1990s before Mr Ehlers became involved with Scavenger”.

The finance minister, his son and the Mozambican refinery