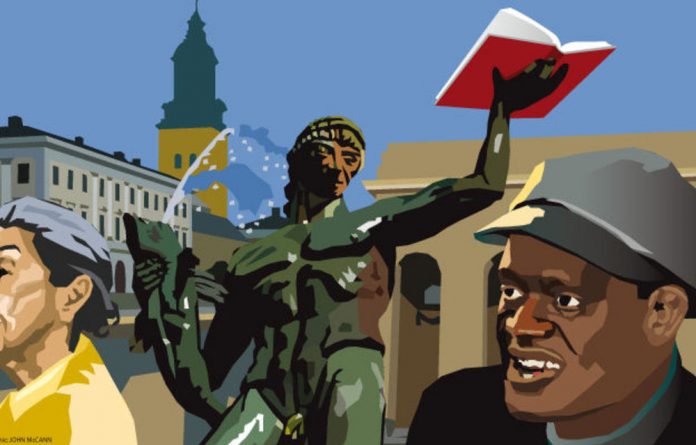 Last weekend almost 70 authors from 28 African countries descended on Gothenburg on the west coast of Sweden. The yearly book fair in the city is the second-largest in Europe and this year the focus was on Africa

With an average of 100000 visitors over four days, the Swedish book fair is more like a literary festival where readers meet authors, listen to seminars and browse through thousands and thousands of book titles.

Normally the conveners select one country as the theme — Spain, Latvia and Estonia being among those featured in recent years. Therefore the choice of Africa as the 2010 theme was criticised in Sweden as being a bit arrogant. Critics said it was like regarding Africa as an entity and not as a continent of more than 50 individual and independent countries.

Not so, in the opinion of the visiting South African authors, one of whom was Nobel laureate Nadine Gordimer.

“I don’t know why anyone should criticise the African focus. In terms of publishing houses there are far less on the continent of Africa than in Europe. And it is wonderful to see a country in Europe focusing on our continent and our writers,” she said.

Gordimer has visited Sweden on many occasions and this time she was one of 10 South African writers who were invited to Gothenburg for the four-day festival.

“To my amazement this is not just a small gathering. This is like a huge funfair,” she said.

But Gordimer didn’t come just for the fun. During her seminar, she appealed to the audience to sign a petition protesting against the South African government’s proposed new Protection of Information Bill and a media appeals tribunal.

“Our protest is an action undertaken by some South Africans for all South Africans, committing ourselves to a demand for our liberty — freedom of thought, freedom of dialogue, freedom from fear of the truth about ourselves,” she said, adding the hope that Sweden, once again, would lend its support and commitment, just as it did during the struggle.

Until now, African literature has had only a small circle of readers in Sweden. Apart from the big names not many authors have had their novels translated. The Africa focus in 2010 changed that.

Kopano Matlwa was one of the authors introduced to the Swedish readership during the fair. Her first novel, Coconut, was translated into Swedish just a few weeks ago. Two seminars, one solo presentation, a TV interview, an interview for radio and a few newspaper interviews were on her schedule in Gothenburg.

“It is very nice to see this kind of sincere and genuine interest in South Africa and the continent. I have met people in Sweden who have devoted much of their lives to Africa. This is a totally different way of thinking which challenges us to take more responsibility at home. Sometimes as South Africans we get so self-absorbed in our own issues that we stop thinking about other countries,” Matlwa said.

She is convinced that the organisers were aware of the criticism that would arise with the choice of Africa as the focus and she believed they managed the balancing act of displaying a broad spectrum of African talent well.

Coconut was well received in Sweden and Matlwa was told by her Swedish publisher that there is now interest from Italy and the Netherlands.

“When one country takes an interest in a writer from our continent, more countries will follow and the European market opens up to us,” she said.

Belonging to the new generation of South African authors, she believed she and her colleagues write differently from the older generation. The demand for African authors to be the voice of Africa or of an individual country has decreased in recent years. “We can write a little bit more freely and we can allow ourselves to be more introspective and self-indulgent,” Matlwa said.

There is no longer the same responsibility to be the voice against apartheid or colonialism — no longer the need to write on the mandate of educating people about events unfolding in Africa.

Nevertheless, many of the young African authors visiting Gothenburg struggled at times to get across their new image — that they represent themselves, not the country of their birth or a political conviction.

“I am writing about what matters to me and young people of South Africa. I’d rather be known as Kopano than as a representative of South Africa, which I think in a way would be an impossible burden that must stifle the creativity,” Matlwa said.

Walking around the book fair you could be forgiven for thinking that this was not Sweden. In the open seminars authors from Zimbabwe, Ghana, Egypt, Sudan and Togo took to the stage. South African publishing houses were represented in a special section, next to the Africa stage. And the topics discussed in the 448 seminars varied from women’s rights to the future of African literature.

Patricia Schonstein from Cape Town took part in a poetry reading on the trams in the city.

“I think a fair like this will remind Europe that Africa is an extremely creative place with very vibrant energy and full of hope — and that, despite the wars, the dictatorships and the economic ruin that one tends to read about, there is also creativity in abundance,” Schonstein said.

This was the second time she had visited the book fair in Gothenburg. Her first novel, Skyline, and her volume of poetry, Unknown Child, were translated into Swedish several years ago. This year her Master’s Ruse was published in a Swedish edition.

“The response of individuals in Sweden has been very good and I believe there have been good reviews. What is apparent to me when I leave Africa and arrive in Europe is that people are obviously reading. You see them in the trains and in the buses and when you walk into homes there are lots of books, in contrast to many African homes where there is an absence of books,” Schonstein said.

She also noticed that many readers in Sweden appear to read comparatively. “When you discuss a book with them, they will always discuss another, similar book that they have read as well. That only happens back home in a limited context among the previously advantaged families,” she said.

Schonstein found it thrilling to see the Africa focus at the fair and said that presenting all of Africa in one place was a strong showcase of the continent’s diversity.

Many had hoped that the focus on Africa would alter the otherwise gloomy and negative picture of the continent that is often presented in the news in Sweden and the rest of Europe.

“The continent of Africa has long been misrepresented in Europe and this is a chance to show the complexity and to help tip the balance in the right direction,” Maaza Mengiste, an Ethiopian author, said.

Crime writer Deon Meyer from Cape Town chuckled when asked what role literature plays in breaking the preconceived perception that many Europeans have of South Africa.

“I am not sure that crime fiction as such could alter that picture. But most readers don’t read crime fiction only. However, what I think crime fiction can do is to raise the interest of a reader in a specific country. Hopefully readers will then start reading more books, other books, other authors, non-fiction and then one day they will visit the country. In that sense I think literature has a huge role to play in educating people about a country or a continent,” he said.

Three of his novels have been translated into Swedish and he has noticed a growing interest from the Swedish readership.

It is a pity, though, he said, that almost always it is only the internationally known authors who get invited to the big book fairs such as the one in Gothenburg.

“In South Africa we have an avalanche of new talent that is fairly unknown even in our own country. There is also a huge interest in crime fiction all across the continent. Countries like Nigeria, Uganda, Kenya and Tanzania have very vibrant crime writing going on. But because it is local, done in the local language, by local publishers and selling in the immediate community, the world doesn’t know about it.”

Görrel Espelund is a Swedish journalist. She also moderated the “Eyes turned homeward” session at the fair