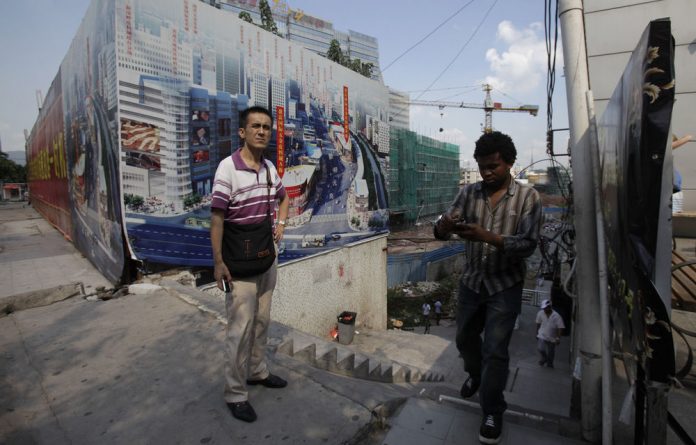 The red vinyl banner hanging from the front of Canaan market, a multi-storey emporium of cheap jeans and hair extensions, begins promisingly: “Welcome to Guangzhou” and concludes less warmly: “Please have your passport ready for checks by police.”

This southern city in China’s Guangdong province has drawn hundreds of thousands of immigrants from across Africa in the past decade: from Burkina Faso and Somalia, the Côte d’Ivoire and Ghana, Tanzania and Angola.

The banner and the dwindling numbers of traders here attest to an immigration crackdown that has alienated many and left young men injured and languishing in detention, community leaders say.

“You go home: the police are knocking on your door. You are on the street: police will hold you. You are on the bus, inside a restaurant, it’s everywhere,” says Ojukwu Emma, the president of the Association of the Nigerian Community, whose compatriots account for almost half the migrants.

Most are traders lured by the cheapness and variety of goods made in the surrounding Pearl River Delta.

In the Chinese-run cafés around the buildings they eat plantains and fufu as well as rice.

In search of a better life
Nkiruka Obi — not his real name — would have gone to Europe, but knew visas were hard to get. So he went to China to buy clothes and computer parts with money saved from jobs in Gabon, South Africa and Libya.

“My friend told me there was hustling here, but he deceived me.”

The man took him to a flat to recover from his flight. When Obi emerged from the shower, his friend had vanished; so had his money. Now he is stuck. It is easy to get here, hard to stay and often difficult to leave.

China tightened immigration controls ahead of the Olympics, ending the routine renewal of short-term visas.

Recently, with the approach of November’s Asian Games in Guangzhou, restrictions have tightened once again.

Africans here say students and those with established businesses are usually fine, but others struggle to get renewals either on the mainland or in Hong Kong or Macau.

Some fly home to reapply. But Obi, whose visa expired two weeks ago, cannot afford a ticket or the 5 000 yuan fine for overstaying.

Fear of raids
It is common for China to restrict visas in the run-up to big events. But Africans allege they are bearing the brunt. They believe it is harder to gain renewal and complain they are targeted in random raids.

Obi is restless; reluctant to loiter in a restaurant, or even at a friend’s home, lest the police come. “If I see them, I run,” he says. “That’s how I live.”

Sometimes, officers will let overstayers slip away for a bribe of up to 10 000 yuan, they say.

Many risk their lives to flee, leaping from buildings to escape raids and paying with broken limbs.

Emma had just returned from telling a Nigerian family their son had died. He jumped from the sixth floor as he fled police and the hospital concluded there was no point keeping him on life support.

Guangzhou’s public security bureau did not respond to queries. But Emma argued that the raids pushed people underground and into crime, when the city should be benefiting from them.

Financial consequences for Chinese vendors
Business has fallen by a third to a half, say Chinese vendors, who depend on African clients. Migrants are already leaving Guangzhou for cities with more sympathetic officials.

Mary Ngum — not her real name — is here legitimately, but says she would rather return to West Africa than endure police raids and wider discrimination.

Elegant and well-spoken, she sighs, recalling the headmaster who refused to hire her to teach “because you are black”; the strangers who hold their noses when she sits beside them on the bus; the derogatory remarks she overhears.

Many blame ignorance, not malice, but she thinks Guangzhou is worse than other cities she has lived in.

“African people should obey the Chinese government’s laws, because some are doing drugs and are criminals,” said Ah Ling, who runs a T-shirt stall in Canaan market. But she is careful to add that others are law-abiding. — Guardian News & Media 2010

A frontier dispute between the two Asian giants turned deadly for the first time in 45 years. Observers argue the skirmish was exacerbated by Delhi’s annexation of Kashmir and Ladakh
Read more
Africa

Amadou Diallo, a Guinean man, was killed by NYPD officers 21 years ago. Today protesters still invoke his name as they fight for justice
Read more
Advertising
Continue to the category
National