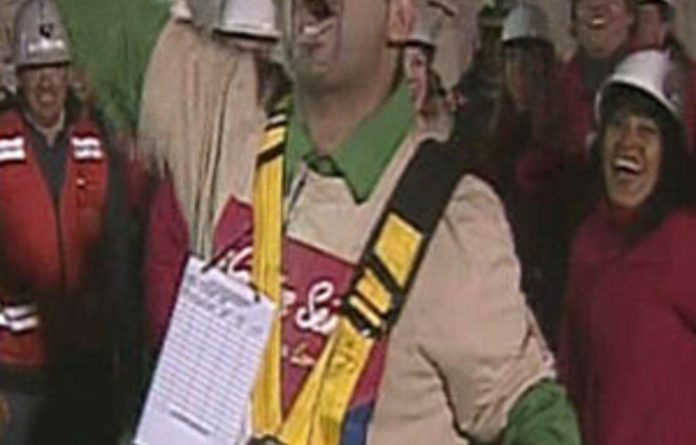 The first of Chile’s 33 trapped miners were pulled to safety in a capsule barely wider than a man’s shoulders early on Wednesday as their two-month ordeal neared its end.

Rescuers, relatives and friends broke into jubilant cheers as father-of-two Florencio Avalos emerged on the surface to breathe his first fresh air in 69 days after a claustrophobic ascent of about 625m through thick rock.

Hugged and kissed by relatives, the 31-year-old Avalos looked very healthy after his nearly 16-minute journey to safety. He was then embraced by President Sebastián Piñera as the surrounding crowd chanted “Chile! Viva Chile!”

Next up was fellow miner Mario Sepulveda, whose whoops of joy resounded on the surface even before he arrived to the laughs of waiting relatives. He stepped out the capsule with a yellow bag, reached in and pulled out souvenir rocks from below, and slapped one in Pinera’s hand.

“I’m so happy!” Sepulveda yelled, grinning, punching his fist in the air and hugging everyone in sight.

The miners have spent a record 69 days in the hot, humid bowels of the gold and copper mine in Chile’s northern Atacama desert since it caved in on August 5. Rescuers hope to bring all the remaining men to safety over the next two days.

For the first 17 days of their ordeal, the miners were all believed to be dead, and their story of survival as well as the extraordinary rescue operation has captured the world’s attention.

After weeks of drilling a narrow shaft down to the miners and preparing the special capsules, the final stage began when a rescuer descended the shaft on Tuesday night. He was hugged by the waiting miners when he reached their tunnel deep in the mine, and he then took just minutes to buckle Avalos into the capsule and send him to the surface.

“This is a miracle from God,” said his jubilant uncle, Alberto Avalos, who rushed to the capsule’s platform as it arrived shortly after midnight.

The men, who set a new record for the length of time workers have survived underground after a mining accident, have been doing exercises to keep their weight down for their ascent.

Nervous wives, children, parents and friends waited on an arid, rocky hillside above the San Jose mine waiting for their loved ones to be evacuated in an operation expected to take up to 48 hours.

The specially-made steel cages are equipped with oxygen masks and escape hatches in case they get stuck.

Long, agonisng wait
Rescuers were finally able to deploy the capsule, dubbed “Phoenix” after the mythical bird that rose from the ashes, after reinforcing part of the narrow escape shaft with metal casing to prevent rocks falling and blocking the exit.

Engineers said the final stage of the rescue still has its risks but that the capsule was handling well in the shaft, and they expected a smooth extraction.

Each man’s journey to safety should take about 15 minutes. The capsule travels at about one metre per second, or a casual walking pace, and can speed to three metres per second if the miner being carried gets into trouble.

The miners can communicate with rescue teams using an intercom in the capsule.

They have been told to keep their eyes closed and will be given dark glasses to avoid damaging their eyesight after spending so long in a dimly lit tunnel. They will then be under observation at a nearby hospital for two days.

Rescuers originally found the men, miraculously all alive, 17 days after the mine’s collapse with a bore hole the width of grapefruit. It then served as an umbilical cord used to pass hydration gels, water and food, as well as letters from their families and soccer videos to keep their spirits up.

Medics say some of the men are psychologically fragile and may struggle with stress for a long time after their rescue.

Pinera ordered an overhaul of Chile’s mine safety regulations after the accident.

Every Chilean TV station was saturated with coverage of the rescue operation.

“Everyone is following the rescue step by step. We are a Catholic country and we see this as a real miracle,” said Maritza Gonzalez, a 50-year-old housewife in the capital city, Santiago.

Many relatives held vigils over the past two months at a tent settlement dubbed “Camp Hope” above the mine, and more people joined as the climax neared.

One of the 33 miners is a Bolivian national and Bolivian President Evo Morales was expected to visit the mine in the early morning hours of Wednesday. – Reuters