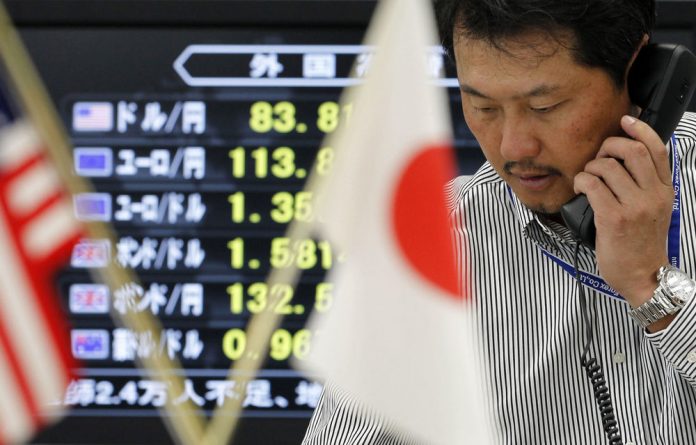 Finance ministers from the G7 will hold an informal meeting in Washington to discuss growing concerns that the world is in the grip of an “international currency war”, as governments manipulate their currencies to bolster exports.

The meeting last Friday, on the sidelines of the annual International Monetary Fund (IMF) gathering, comes amid rising tension between the Western industrialised nations and China, whose Prime Minister Wen Jiabao is currently on a charm offensive in Europe.

In two separate moves designed to weaken currencies the Bank of Japan reinstated its zero interest rate policy and pledged to buy ¥5-trillion ($60,7-billion) of assets, whereas Brazil doubled a tax on foreign investors buying local bonds to put a lid on a recent rally in its currency, the real.

The Bank of Japan set its interest rate target to a range of zero to 0,1%, returning to zero rates for the first time in more than four years and underlining worries about the Japanese economy, which is beset by falling prices.

Officials intervened in the currency markets last month to weaken the yen, but the impact was only short-lived.

“The pace of recovery is slowing down partly due to the slowdown in overseas economies and the effects of the yen’s appreciation,” the bank said.

A need for action
Ahead of the IMF meeting, the Institute of International Finance, an industry group representing some of the world’s largest banks, last week urged action.

In a letter to the IMF, Charles Dallara, the banking lobby group’s managing director, called for greater cooperation: “Urgent action is needed to arrest the disturbing trend towards unilateral moves on macroeconomic, trade and currency issues,” he said.

Much of the focus remains on China, which has built its economy on exports and keeps its currency artificially low.

Manufacturing figures two weeks ago told a clear story of the divergent economies in the developed world and emerging markets.

Factory output in Britain, the United States, Spain, Ireland and Greece all fell back sharply during September whereas, in China, manufacturing output rebounded more quickly than economists had been expecting.

Juncker said: “Given China’s important role, we do think that a significant and broad-based appreciation [of the yuan would] promote a more balanced growth to the benefit of both China and the global economy.”

Following the Europe-Asia summit, Juncker said the discussions had been “open, frank, but nevertheless friendly” and added that both sides agreed a currency war would be “destructive”.

But he said the plea for movement on the yuan had been rebuffed by China, which argues that it needs rapid growth in its economy to pull hundreds of millions of people out of poverty.

Wen, in return, said the rapidly growing economies of Asia should be granted more power within global institutions and that Europe should give up some of its seats at the IMF.

In Athens two weeks ago Wen attempted to smooth over relations between China and the West by offering support for the euro and suggesting that China would participate in auctions of indebted nations, government bonds, including Greece, as they seek to refinance their struggling economies.

Tension between Beijing and Washington has been mounting on the currency issue and Congress has approved legislation enabling the US to impose trade sanctions on nations that manipulate currencies to win competitive advantage.

China is also under pressure to stimulate its domestic economy to build a market for imports from other nations. –Guardian News & Media 2010